From furloughs to hiring freezes: How metro-area governments are handling COVID-19 budget woes

Employees in three Colorado cities - Aurora, Boulder and Broomfield - have been furloughed. 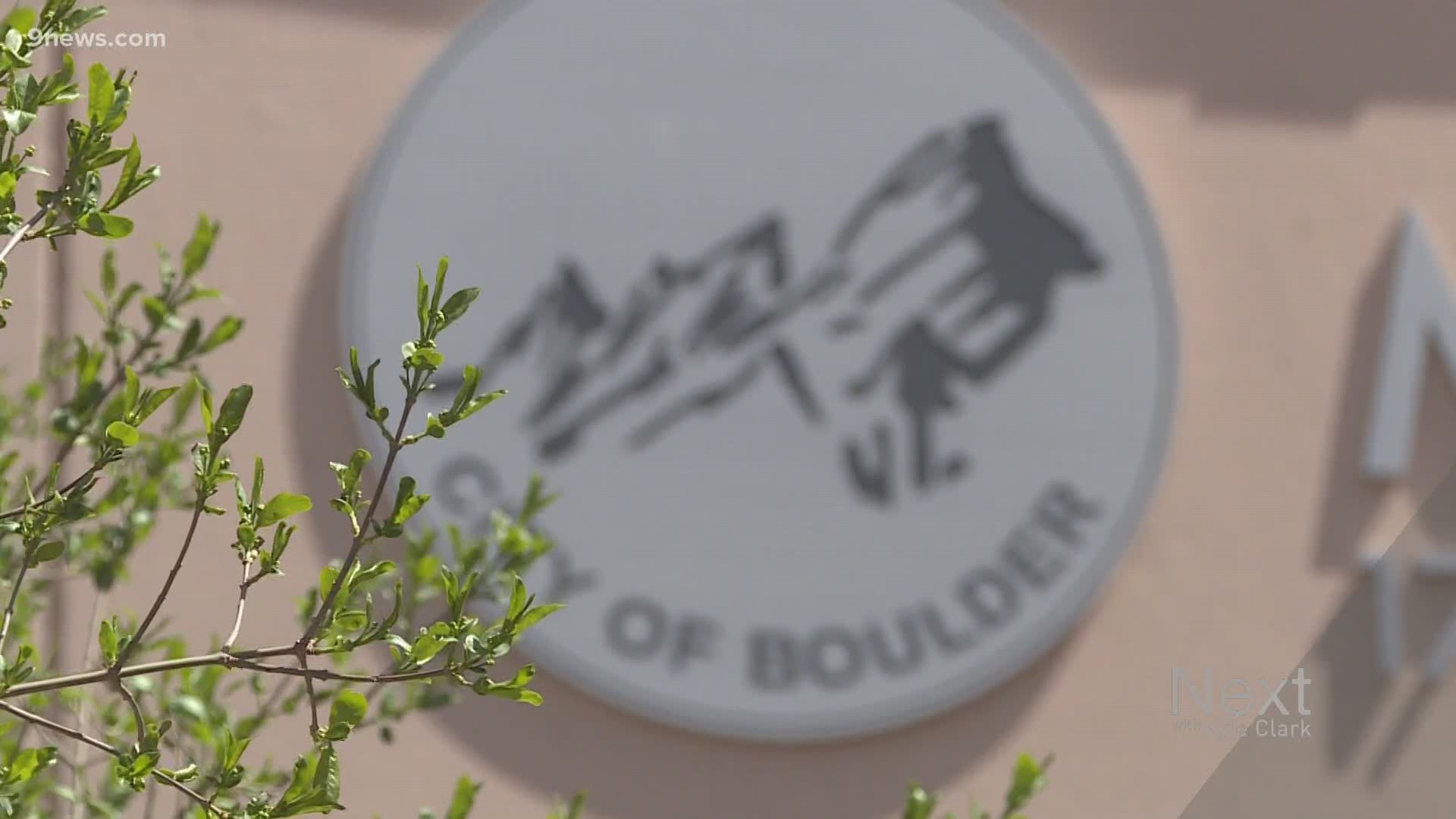 DENVER — Aurora is the latest city to use furloughs to solve the missing money problem.

The city of Aurora estimates that it's going to be short $20 million - $25 million, mainly because of sales and use tax revenue being down during the COVID-19 crisis.

On Wednesday afternoon, the city revealed that it will indefinitely furlough 576 "temporary, contingent and seasonal employees who have been sidelined from their normal work functions," meaning unpaid time off for now.

"None of the city’s regular full-time and part-time employees, or those temporary, contingent and seasonal employees whose work functions continued through the current crisis, are affected by these furloughs," the city wrote in a statement.

On Tuesday, the city of Boulder announced 10-week furloughs for 737 employees, including 175 full-time employees.

Ten weeks is the equivalent of a summer vacation from grade school.

Broomfield has also announced 10-week furloughs for 235 employees. Both Broomfield and Boulder furloughs begin on Monday.

Before asking employees to take a 100 percent pay cut, no employees in Aurora, Boulder or Broomfield were asked to take a pay cut across the board to keep the furloughs from happening.

RELATED: Furloughed or laid off? What's the difference?

Percentage of budget: 6% of the general fund

How much of the budget is sales/use tax: 65% of the general fund

How much is in reserve: 20% (no dollar amount provided)

How much is required to be in reserve: 17% (no dollar amount provided)

Starting April 25, 576 temporary, contingent and seasonal workers will be put on indefinite furlough.

“We proceeded with furloughs when our budget forecasts made it clear we had no other choice, and our hope is that the enhanced unemployment benefits announced under the CARES Act will provide them with financial stability until we can make further decisions about restoring our city services and bringing employees back to work. My heart goes out to all of our employees affected by this," said Aurora City Manager Jim Twombly in an emailed release.

The city has instituted a hiring freeze and compensation freeze. There is no more travel or conference attendance. And the city has delayed Capital projects.

How much is required to be in reserve: 3%

The furloughs are the next step in trying to shore up $28 million that the city expected to have, but now won't because of lagging sales tax.

"Part of it is we have people at home who are not able to work at all, so there’s a philosophical question about, 'do you pay people out of tax revenues to be at home not working?'" said von Keyserling. "Rec centers aren't collecting fees, parking garages aren't collecting fees, some of our planning and development services have slowed down because of shutdowns that are happening."

The city's reserve fund has about the same amount it estimates being short from sales tax revenue being down. There is $28.2 million in the reserve fund, which constitutes 19.5% of the budget.

"The reserve fund is also there for natural disasters, such as wildfires and floods, and we may end up experiencing those disasters on top of this one," said von Keyserling. "What the city is looking at is using some of those reserve funds, about 4% of them, to help cover some of these losses."

During a city council meeting on Tuesday night, the city manager suggested pay reductions could be next.

"Pay reductions have not been implemented yet. The city manager did mention last night that there would be a 'Phase Two,' and pay reductions for staff who are still working in the city is certainly on the table for discussion," said von Keyserling.

How much of the budget is sales/use tax: 50%

The city of Denver is down $180 million, with $140 million of that from low sales tax revenue.

"We have asked agencies to identify 7.5 percent of their budgets for consideration," said Denver Finance Director Brendan Hanlon. "We go through a deliberate process, we don’t just cut across the board. We want to make a thoughtful, informed decision based on feedback that we received from them."

Denver has a three-part plan:

The city could use about $30 million from its reserve fund and still have the required amount in the piggy bank.

"We have a policy of maintaining 15% in that rainy day fund. We are likely to dip below that 15% just because this is such a historic event, and that’s why we put the reserves in place is to accommodate a situation like this," said Hanlon. "What I’m trying to emphasize internally is that we don’t use that tool in a maximum fashion so that it’s not available for future years."

Expenses like travel and vehicle purchases have been put on hold. Department cuts would be next.

"In the middle of May, will be reviewing proposals with the mayor and considering implementation," said Hanlon. "We have only begun to start to look into 2021, but you can imagine how challenging an activity that’s likely to be because of all the uncertainty."

Sales and use tax makes up $140 million of the $180 million shortfall. Part of the other $40 million comes from parking meters, parking fines and the lodgers tax. Another significant amount is from the city's occupational privilege tax.

"That is the tax that is applied for each employee in the city and County of Denver," said Hanlon. "$9.75 per month, per employee."

So far, Denver has not announced any furloughs.

"That’s a tool that we would prefer to deploy after we’ve gone through a process where we evaluated the use of our reserves, these citywide proposals and the agency proposals, as well," said Hanlon. "It would be a supplement to that three-part plan, so that is at the end of that process."

He also said, unlike individuals and small businesses, federal stimulus money won't backfill what the city is missing, just what the city creates to handle COVID-19.

"It will be very valuable to get those federal dollars, and to help us reimburse for the emergency spending that we’ve had to conduct, but it does not help with the challenge of this revenue profile that I was describing, the 12% loss that we’re forecasting," said Hanlon.

How much of the budget is sales/use tax: 61%

How much is required to be in reserve: Englewood has $10 million more than required, though $3 million is loaned to the city's stormwater fund.

Unlike Denver and other nearby cities, Englewood isn't hurting as much.

"We don’t have the number of hotels that a city like Denver or even Littleton have, quite honestly, so that is a significant loss for those municipalities," said Englewood Finance Director Maria Sobota. "We recognize that there were many businesses that actually provide essential services to citizens, and so they were either open or they were on a partial operating workload."

Englewood is short $1.6 million. The city has already delayed hiring for vacant jobs and canceled other miscellaneous spending to get within $500,000 of even.

"We have been able to identify savings just because we haven’t been able to travel or do training, supply savings, things like that," said Sobota. "We have accumulated approximately $1.1 million in savings that we believe will offset the majority of what we think our shortfall will be."

No furloughs have been discussed in Englewood.

"Our plan as a city is to offset those shortfalls with reduced operating expenses, to the extent that we can," said Sobota.

How much of the budget is sales/use tax: 50%

How much is in reserve: $66 million

How much is required to be in reserve: $33 million

The city of Fort Collins is still determining the impact of COVID-19 on its budget.

"Work is underway to forecast the impacts across multiple scenarios, ranging from $15 million to $50 million in revenue shortfalls. The City expects to present City Council with a revised 2020 revenue and expense forecast by the end of June," Fort Collins Communications Director Amanda King said in an email. "Fort Collins anticipates balancing any budget shortfall through a combined cost containment and reserve-based approach.

The city provided the following steps taken so far:

Fort Collins has not furloughed or laid off any employees.

How much of the budget is sales/use tax: 46%

"Many of your questions are still being analyzed. Our finance department and leadership team are working through the current state of the situation while reviewing projections and scenarios, so at this time, I don’t have specific numbers available," Greeley Communications Director Kelli Johnson said in an email.

How much of the budget is sales/use tax: 51%

How much is required to be in reserve: 13%

"Because the sales tax receipts lag a month behind the current month, it’s not yet known how much the economic consequences of the pandemic will affect the city’s 2020 budget," the city of Lakewood said in a news release.

Lakewood also has a hiring freeze.

"The city, however, is assessing how to manage filling positions needed seasonally to operate pools, festivals, camps and other programs scheduled for the summer," the release said.

Current budget shortfall: "We'll have a better idea at the end of this month."

"This includes changes to temporary staffing levels, a freeze on seasonal and vacant positions (except for essential positions such as police), learning and education, and tuition reimbursement; putting a hold on several professional and consulting projects; and reductions in parts, supplies, printing and maintenance," said Littleton City Manager Mark Relph in a news release.

The city and county of Broomfield is instituting 10-week furloughs for 235 employees starting on Monday.

"We won’t have specifics for budget cuts until the actual numbers are in - and until we have discussed with our City Council and those impacted first," City Manager Jennifer Hoffman said in an email.