Denver is giving businesses the business if they aren't shutting down non-critical workplaces. But some business owners argue they are essential. 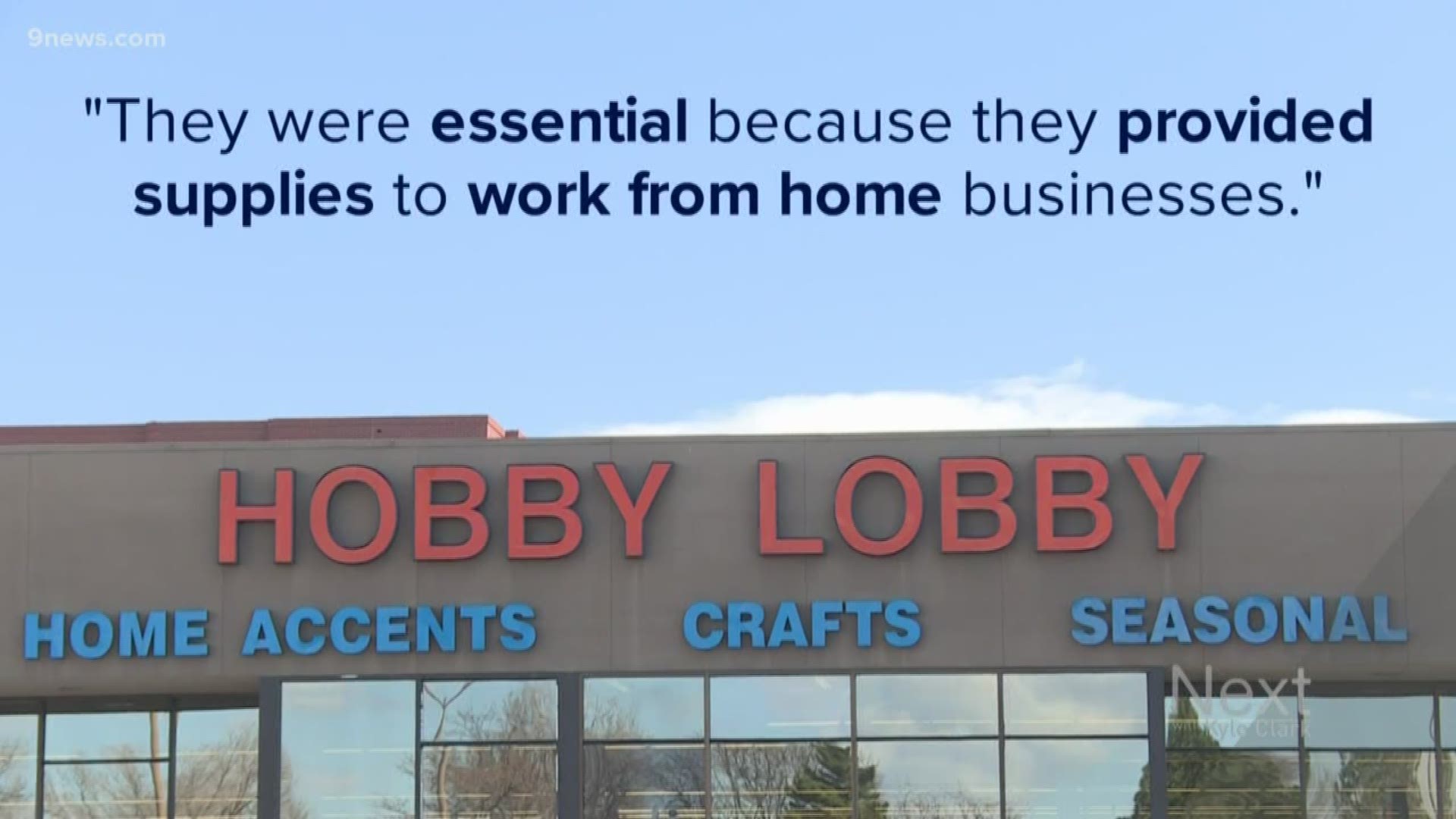 DENVER — Four businesses have been cited for being in violation of Denver's stay-at-home order -- including one business twice.

One business in Boulder has also been cited.

Local county health departments are receiving complaints that businesses are open when they shouldn't be, based on the criteria set forth by stay-at-home orders in Denver and the state's version implemented by Gov. Jared Polis (D-Colorado) and the Colorado Department of Public Health and Environment.

RELATED: Businesses may get COVID-19 relief loans as soon as Friday

RELATED: Some Coloradans wonder what to do when the rent is due

As of Tuesday morning, Denver received 93 complaints and issued 63 warnings. Four businesses were given a "general violation," which comes with a date in court. Though, the date wouldn't happen before July.

The businesses cited by Denver's Department of Public Health and Environment include:

Boulder County Public Health Department has received 125 complaints. Of those, 25 warnings have been issued, four have been referred to police and one notice of violation has been sent.

The violation was also to a GameStop location.

Jefferson County Public Health Department has received between 40 and 50 complaints, but a spokeswoman said that is a rough estimate. There are no violations in Jefferson County.

"At this point, all of them have been followed up with and have been resolved through education," said spokeswoman Ashley Sever. "Since the order is complex, we have been working closely with local law enforcement and internally to refine our education and enforcement process. We are taking a collaborative, education-based approach to following up on the reports/complaints we receive from the public. We certainly understand concerns from the public, and we prioritize reports that appear to be threats to public health and in clear violation of the order.

So far, Tri-County Public Health Department has received 140 complaints about business and/or restaurants violating the state's "stay at home" order.

"We're in the process of responding to these and seeking voluntary compliance," said Executive Director Dr. John Douglas. "We are still in the process of refining this process with all three of our counties based on the Orders issued by the Colorado Department of Public Health and Environment. We are working with our law enforcement partners and county legal teams on how to best manage complaints in Adams, Arapahoe and Douglas counties. Our goal in responding to complaints is to educate the community and business owners on the various Orders and what it means to them."

So far, there have been no enforcement actions in Adams, Arapahoe or Douglas Counties.

"While we are expecting voluntary compliance given the seriousness of COVID-19 and its impact on our communities, we, like other public health departments, are developing enforcement procedures to use in the rare cases that they might be needed to be sure that non-compliance by a few doesn’t undermine the sacrifices that most of the community is making. We are all in this together and it takes all of us following the Governor’s public health order to reduce the spread of COVID-19 and not draw this out any longer than absolutely necessary," said Douglas.

According to a city of Denver spokesman, GameStop was issued a warning on March 25. When the city public health investigator returned on March 26, the businesses was given a general violation and ordered to close.

On Tuesday, the store was closed. On the door was a notice by the city that stated the violation was:

Other reasons that businesses can be cited by Denver:

According to a city spokesman, GameStop defended being open with the "claim they sell essential businesses supplies such as mice and keyboards."

The business first received a warning on Thursday, before being cited twice on two revisits.

According to the city of Denver, the first citation was for multiple employees and customers inside. The second citation was for several customers in the facility, as well as employees. On the paperwork that the business received, the city noted: "Business or facility operating without applicable restrictions."

The attorney for Appliance Factory Mattress Kingdom responded to the city with multiple letters.

"Many still want to come into our retail stores, learn about the appliances, and then make a purchase – this is particularly true now that many in our community have been devastated economically by the pandemic," wrote attorney Dennis Kaw. "For the above reasons, my client is operating well within what is explicitly written in the Order and will remain open to serve the public as intended by the Order. While we have already reduced staffing at our stores and implemented social distancing measures to further comply with the Order, we will reduce our staffing to no more than two employees per store and will implement further social distancing measures."

"Right now, we're limiting our customers to only three in a store at once," said Coudayre. "We're already practicing social distancing, so there's nothing that we need to be doing more."

In the second letter to the city of Denver, Kaw wrote:

"While the inspectors have conceded that appliances are necessary and essential under the Order, the inspectors would 'prefer' we only sell on-line or by phone and close our stores…

"Please quash (the two citations) and please tell the Health Department inspectors to immediately stop coming into our stores. If Denver continues to harass our employees and/or shut down our business, A and A may pursue an immediate injunction to have Denver act within the scope if its authority and follow its own Order.

"A and A has fully complied with the Order, has stay opened as Denver has asked all Essential Businesses to do, and A and A will remain open so the public can safely survive the Order that Denver has been issued."

Late Tuesday night, Kaw provided 9NEWS an email from the director of the Denver Department of Public Health and Environment that said appealing the violation doesn't make it go away in the interim.

"As we discussed, appealing an order does not stay the enforcement action in this case given the public health hazard. Further noncompliance with the City of Denver’s public health order and orders issued by the Dept of Public Health & Environment may result in police actions, including arrests if that action is necessary to achieve compliance," wrote director Danica Lee.

"Please don't arrest our employees in these difficult times, they have families to support. Don't play the threat game to get us to shut down -- we will follow a lawful court order if a court determine we are not essential under the Denver Order. If you are determined to arrest anyone, please get an arrest warrant for me as I have made the determination that we are an essential business under the Denver Order; don't arrest our employees," wrote Kaw.

Denver issued a warning at the car wash at 6th Avenue and Santa Fe Drive on Saturday.

On Sunday, an investigator returned and cited the car wash for having "two employees inside working."

So why just this car wash? Investigations are based on complaints, likely from an employee or customer. According to the city, any automatic or unattended car wash would be OK.

The Hobby Lobby parking lot at the location near Leetsdale Drive and Monaco Parkway was empty on Tuesday because it was closed.

The day before, however, Hobby Lobby was open and received a citation from Denver public health investigators.

According to the city, no warning was issued, but rather the general violation. The city noted that Hobby Lobby said "they were essential because they provided supplies to work from home businesses."

At Alameda Avenue and Saulsbury Street in Lakewood, that Hobby Lobby location was open. A sign just inside the entrance doors told customers to "Please Wait: Only 10 customers."

This location is under the watch of the Jefferson County Public Health Department, which is only providing education to businesses, and not yet enforcing actions.