Denver has to vote twice in 28 days, but what if there were a different way?

DENVER — Watch your mailbox Denver voters, ballots for the runoff election will be mailed on May 20.

If you're thinking, "Wait a minute! Didn't I just vote in an election on Tuesday?" Yeah, you did.

Denver's municipal election requires the winner to receive 50% plus one to be announced the winner, without having to compete in a runoff with the top two candidates.

In the race for Mayor, two-term incumbent Michael Hancock received 39% of the vote. Jamie Giellis finished in second with 25%. They will now be on a new ballot to compete one-on-one.

Here are the other races where the first place candidate did not achieve 50%, thus requiring a runoff:

What if we didn't need to vote again?

"As a taxpayer, Denver would save probably between $800,000 to $1 million," said former Denver Elections Director Amber McReynolds.

There is a method called "ranked choice voting." That requires voters to select their favorite choice, followed by who they would want second, third, etc. If the top candidate does not get 50%, the candidate who received the least number of votes would be eliminated, and whoever voted for that last place candidate would then have their second place vote count toward the remaining candidates. If that doesn't get the top candidate to 50%, whoever is in last place would be eliminated, and whoever voted for that candidate will then have their next choice counted instead. This continues until a candidate receives 50%.

"I had my eight-year-old daughter fill it out, and she did fine and put a write-in," said McReynolds, who in 2017 put together a sample ranked choice voting ballot to try to convince city council to change city charter to allow it.

To better demonstrate this, we posted a poll Thursday afternoon to vote on your favorite segment on Next with Kyle Clark. No segment got 50% of the vote, so the last choice was eliminated, and whoever voted for the last choice had their second option picked instead. This continued for three rounds.

We experiment with Ranked Choice Voting 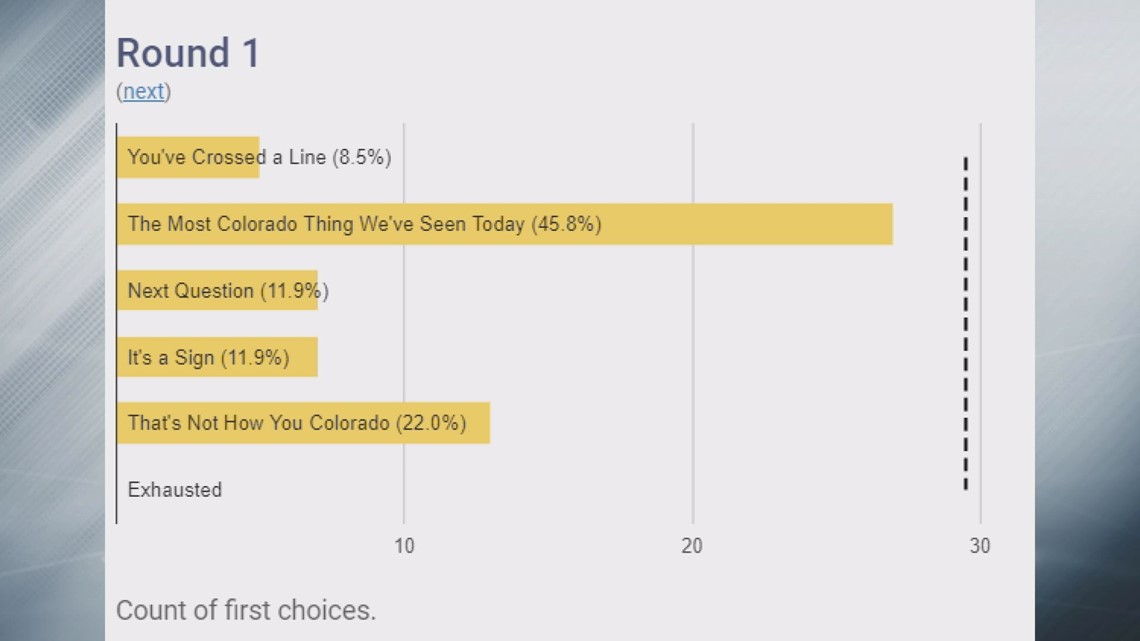 "Denver dumped ranked choice voting. We had it. We had it for 20 years, and it failed and the voters repealed it," said Denver City Councilman Kevin Flynn.

Since city council would have to vote to change how Denver votes, he researched the topic and discovered Denver had ranked choice voting from 1916 to 1935.

"The Oscars used it to pick Best Picture and, Birdman people, really?" he opined about Birdman winning in 2015, beating out movies like Boyhood, Whiplash and Selma.

Using Tuesday's mayors' race as an example, the 1,300 people who voted for Stephan "Seku" Evans, would have had their vote cast for their second choice since Seku finished in last.

"You end up with a system where the people who thought that the last place finisher would have made the best possible mayor, the person that they thought was second only to that last place person gets those votes," said Flynn.

McReynolds believe this would engage candidates and voters even more. Where a candidate might skip door knocking a home with a different candidate's yard sign, they may try to encourage the voter to rank them high on their ballot.

"Instead of skipping those people, now you're more inclined to talk to that person, to say, 'Well, OK I understand that, will you put me second?'" said McReynolds.

Denver runoff ballots, without ranked choice voting, are due by 7 p.m. on June 4.

On your June 4 ballot will be: