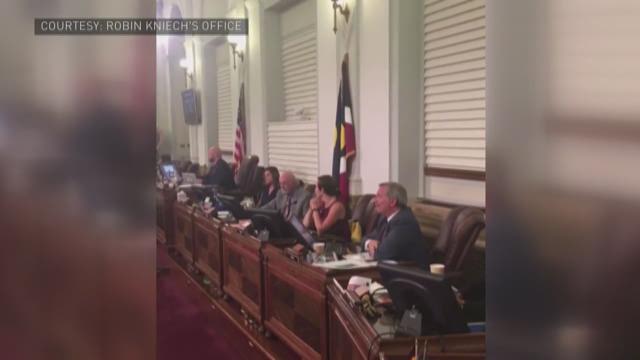 The bill, sponsored by council members Paul Lopez and Robin Knieche, was expected to pass, and did so with a standing ovation from the audience.

It’s now in writing that city employees, like officers, will not collect information on immigration status. The city won’t detain anyone beyond that person’s sentence on behalf ICE. The city won’t share anyone’s citizenship states for the purpose of immigration enforcement. The city will not allow ICE agents into jail without a warrant. Exceptions to these rules include necessary peace-keeping, or following a warrant from a federal judge.

The ordinance does not prohibit the sheriff’s office from notifying ICE if someone wanted for deportation is leaving the jail - a source of controversy since earlier this year, when the city came under fire for only giving ICE 26 minutes’ notice before releasing an inmate from a downtown Denver jail. Ever Valles was a known “immigration enforcement priority” before he was arrested and charged with the murder of a man at a light rail station.

Lopez and Knieche have said this law will help people here illegally feel comfortable calling police when needed, as well as give the city confidence that city resources are dedicated to Denver issues. Denver already abided by pieces of this ordinance, but it was never formally on the books.

In response to the City Council’s decision, Mayor Hancock said:

“Tonight, with the unanimous vote by City Council, Denver is sending a clear and resolute message to our community that we stand with the immigrant and refugee communities and are committed to remaining a city that is safe and welcoming for all. I commend and sincerely thank Council Members Paul Lopez and Robin Kniech and city staff for their leadership, as well as the community for staying engaged in this critical conversation.

Local government’s ability to protect and serve all of our people is enhanced when community members feel safe coming forward as either a victim of or a witness to a crime, regardless of their legal status. Through this ordinance and the other steps we are taking, Denver is building a trusting relationship with our immigrant and refugee communities that will improve the safety of our city and help everyone feel more secure.

Along with this new ordinance, I look forward to signing a complementary Executive Order that will establish a legal defense fund; create a working group to track developments and policy around immigration; protect victims of crime regardless of their immigration status; assist children and families who become separated by the country’s broken immigration system; and continue coordinating actions for immigrants and refugees.”

Following Monday night’s vote, Jeffrey Lynch, the field officer for ICE in Denver, did not mince words in it’s statement about this ordinance. In full, Lynch’s statement said:

Unfortunately, with this established policy, we can expect to witness more tragedies like we saw in the recent case of Ever Valles, a known gang member and an immigration enforcement priority, who was released in December 2016 by Denver County without ICE being properly notified. He was later arrested and charged with murdering a 32-year-old man at a Denver light rail station just seven weeks after he was released from Denver County Jail.

Our goal is to build cooperative, respectful relationships with our law enforcement partners. While we will continue our efforts to work with Denver’s city government in support of public safety, it is disappointing that they have taken such an extreme step in the wrong direction.”

RELATED: A formal proposal to keep Denver out of immigration enforcement

In a press conference earlier this month, the city council said any employee who does not follow the new set of rules will be reprimanded as necessary, as they would if they didn’t follow other city rules.

The city council also said they are aware Denver could lose city funding; Lopez and Kniech told 9NEWS they would forgo the money, or possibly challenge the government through lawsuits.

In the 2017 fiscal year, Denver is due to receive $423,000 in what are known as Byrne JAG grants. Sessions has threatened that “sanctuary cities” would lose federal funding. Denver has never labeled itself as such.