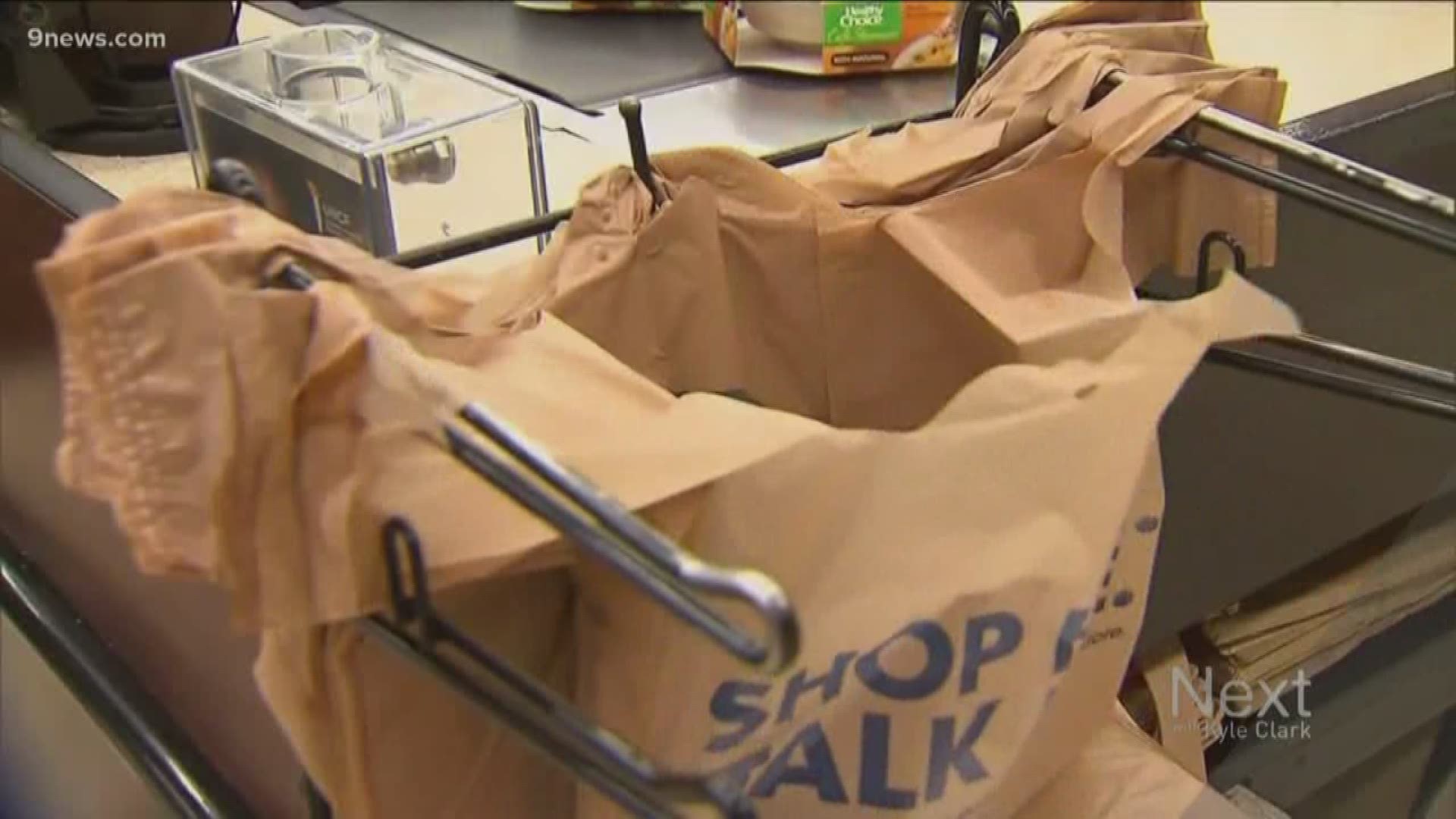 DENVER — Tuesday, the Denver City Council Finance and Governance Committee unanimously voted to move forward with a proposed bag fee ordinance, meaning it will be presented to the full council later this month.

The committee meeting included member discussion and a period for public comment, although only two people signed up to speak. Both of them represented retail groups and spoke in favor of the proposal.

Councilwoman Kendra Black, a member of the committee, is a sponsor of the bag fee ordinance. She said the idea is to attach a 10 cent fee per single-use plastic bag to encourage people to change their habits and start relying on reusable bags.

"You'll go to a convenience store, get a packet of gum. They put it in a bag, then you walk outside and put the bag in the trash and get in the car. We overuse them," Black said.

The fee would apply to retail stores, including department, hardware and grocery stores. There would be exemptions for people using Supplemental Nutrition Assistance Program (SNAP) benefits. Other exemptions would include produce bags and dry cleaning bags.

"First time you'll go to the store they'll say, 'Do you want a bag?' And you'll say, 'Yes.' Then they'll say, 'It's 10 cents.' Maybe you pay 50 cents that day, and maybe next time you will remember to bring your bags," Black said.

The 10 cent fee would apply to paper bags, as well, to counteract what Black said has happened in other cities that completely banned plastic bags.

"For cities that did ban them, stores just offered free paper bags, and they have a big carbon footprint to produce and to transport," she said. "And they also can only be recycled a couple of times."

RELATED: Next Question: How much money has Boulder collected from its plastic bag fee?

This isn't the first time the city council has looked at this issue, in a city where anywhere from 150 to 250 million plastic bags are used in a year. The debate dates back to 2013, but none of the proposals passed into law. Tuesday's decision marked the city's biggest step yet in adding such a fee. Black hopes that because this is more of a mainstream conversation now, the ordinance will take in Denver this time around.

At this point, enough other cities have a similar fee program or ban that Denver has some numbers to consider. According to Black, studies have shown that a 10 cent fee has encouraged people to change their plastic bag habit.

Boulder saw a 70% drop in the number of people using plastic bags since they passed a similar ordinance in 2013. Seattle saw a 50% reduction, and California saw a 73% drop, according to a presentation attached to the city council agenda.

Council documents say that 11 municipalities in Colorado already have restrictions on bag use. In the U.S. there are more than 400 similar laws.

Chris Howes is with the Colorado Retail Council, which works with stores in 2,000 retail locations across the state, and he has been vocal about concerns.

"Our major concern was we didn't want our clerks, at point of sale, to somehow be made into the plastic bag police," he said.

"The idea of a complete ban was a little too much for some people to understand how that might work and how customers might get their groceries home," he said.

However, Howes said Monday he supports the current proposal and that it fits with what a lot of stores are already doing, which is working towards being more environmentally friendly.

"[It will] certainly be some sort of burden on the store," said Howes. "That's why the 4 cents out of the 10 cents will be kept by the retailer. That will help pay for some of the setup of those programs."

Black said there isn't a finalized number for much implementing this proposal would cost. She did say the city would use the funds raised by the fees for marketing and education and hopes that over time, the city won't collect as much money because that means people have stopped paying for plastic bags.

If the proposed ordinance does pass, the city would distribute reusable bags.

The full city council will look at the ordinance on the evening of Dec. 16. That meeting will include a period for citizen comment, as well.

ANSWERS TO YOUR QUESTIONS:

If people order their groceries in advance for pick-up, will they have to pay the fee if the store is bagging them?

Yes, you will have to pay that fee.

How will I pick up after my dog if I have to pay for plastic bags?

Tuesday a city councilman said he got the same question and encouraged people to use biodegradable bags over plastic grocery bags to be more environmentally friendly.

Can I reuse single use plastic bags and paper bags I already have?

In an FAQ from the city it said yes the fee is only charged when you get a new single use plastic or paper bag.

I'm on a fixed income. Am I exempt from the fee?

In that same FAQ, the city said if you use SNAP funds, you are exempt. And if you don't remember to bring your own bags you won't be charged a fee. And as a part of the education and marketing campaign, free reusable bags will be distributed through the city.