Denver students spreading positivity for 17 days instead of holding walkouts

The students are ordering pledge cards they plan to distribute at school so others will take an anti-bullying pledge or a pledge to not be mean. They got bracelets to give to those who will sign it. 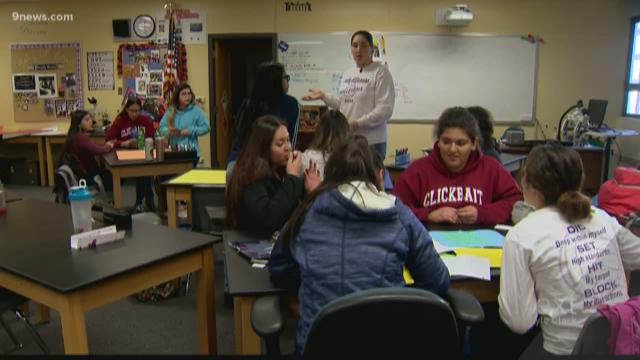 DENVER - Students across the country have been walking out to protest gun violence after 17 people were killed at a high school in Parkland Florida. Students at Career Education Center Early College of Denver considered it. But opted for something else.

“We were thinking about it,” said Bre Gonzales, a 16-year-old student. “It really didn’t solve any questions. We want, if we were to do a walkout, we wanted it to mean something. We wanted to do something that would have an impact.”

Instead, Gonzales, who has an air of a leader, at least she communicates as such in her class, took control of others in her Criminal Justice Forensic Science class and is moving forward with a campaign called Positive Ways 17 Days.

“We’re trying to do positive ways for 17 days,” she said. “Being positive online and in real life and hopefully after the 17 days it will just naturally complete itself, no more bullying or negativity in any aspects of our lives.”

“We thought this would be a more impactful way to show people, on social media and have posters around the school, cuz we’re walking around the hallways all day, this is where we’re at most of our day, you can see it, it’s always kind of a reminder.”

On posters and for the next 17 days, the students intend to put words of encouragement, love, inspiration, talk about bullying and being bullied, honor the 17 people who died in the Florida school as well as victims of other school shootings.

“If the student who's being bullied realizes they're not alone, there are people out there to help them, then I feel like they have more voice, have more power behind it, they're not a victim, they could rise up and be something more,” Gonzales said. “The bullies themselves can realize this isn't right, I shouldn't do this.”

The students are ordering pledge cards they plan to distribute at school so others will take an anti-bullying pledge or a pledge to not be mean. They got bracelets to give to those who will sign it.

The bracelets will say #positivewaysfor17days. You can find the movement on Instagram at @Positiveways17days.