'It didn't ask you for facts, it asks you for comments': Denver Voter Information Guide not based on facts

A voter found an argument in his Denver Blue Book that didn't appear to be true. The city told him it doesn't have to be. 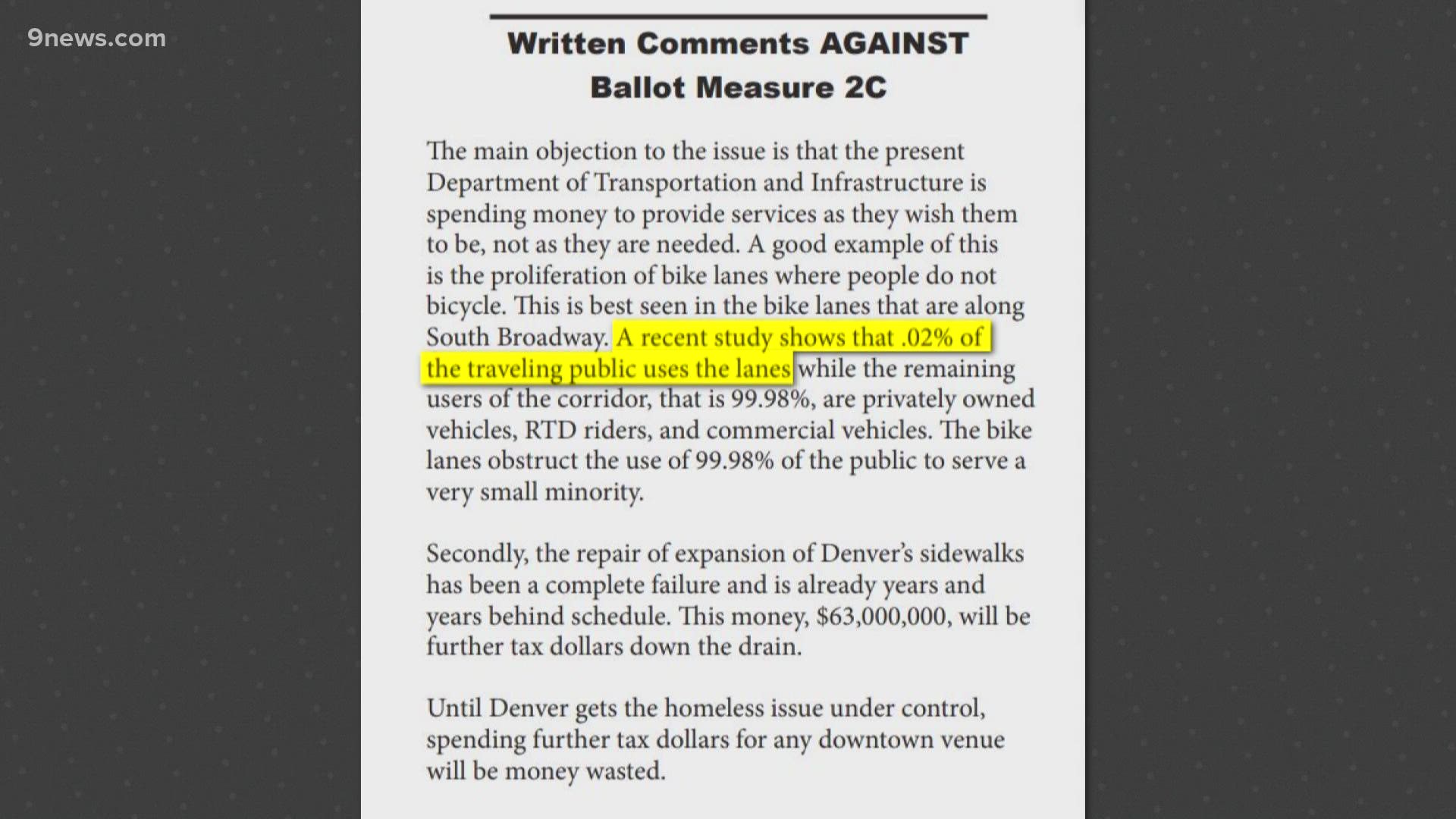 DENVER — Voter information mailed to your home is supposed to help you understand the November ballot issues.

No one said the information had to be truthful.

A Denver voter wondered about one of the arguments against Denver Ballot Measure 2C in Denver's version of the 2021 Blue Book, called the Municipal Ballot Information Booklet. Denver sends out a TABOR notice to explain the financial implications of debt and tax issues. It also publishes for and against arguments for ballot issues. Denver's version covers 13 citywide ballot issues.

"I've always used it as, at least, a baseline, particularly on stuff like this," said Denver voter Jeff Helgerson.

Helgerson reached out to the Denver Elections Division after reading the arguments against 2C.

First of all, what is 2C? It is one of five bond questions facing Denver voters.

A YES vote means you are OK with the city borrowing money, to pay back later with interest, for city transportation needs.

A NO vote means you do not want the city borrowing the money.

The arguments for 2C were provided by Denver City Council because council put the issue on the ballot.

Arguments against ballot issues can be provided by any registered Denver voter.

One of the arguments against 2C talked about the lack of use of the bike lane on South Broadway.

"A recent study shows that .02% of the traveling public uses the lanes while the remaining users of the corridor, that is 99.98%, are privately owned vehicles, RTD riders and commercial vehicles," Helgerson read from the Denver Blue Book. "When I, kind of, ran the numbers, that's about 140 people in the entire city that they're claiming use bike lanes, which seems obviously pretty low to me, so I was just kind of curious what study they were referencing."

Helgerson emailed the city to find out about the study.

He got a response that revealed the Denver Blue Book is not necessarily based on facts.

"Jeff, we don’t alter written comments from the public and are required by statute to publish what is submitted. The only case in which we would edit comments is to summarize them if they’re too long. However, in this instance, that is simply what was submitted to us and we have no further information on the statement," the city wrote back.

"Our job, when it comes to the guide, we are the compilers of the information. We do not perform fiscal analysis. We do not fact check what are, essentially, people's opinions," said Denver Elections Division Communications Manager Alton Dillard.

The clerk and recorder's office can summarize the argument if it is longer than 500 words, but it cannot edit for facts.

"We do not, under current law, have editorial over what gets submitted to us," said Dillard. "A pro or con statement can't have any profanity, indecent language, immoral language, anything considered offensive, libelous or scandalous."

In comparison, the Colorado Blue Book (the one that is actually colored blue) explains the three statewide ballot issues that are on everyone's ballot. The statewide Blue Book is put together by the non-partisan Legislative Council Staff. The statements in that Blue Book can be amended by the Legislative Council Committee of 18 Democrats and Republicans from within the state legislature. The current makeup of that committee is 11 Democrats and seven Republicans, weighted in favor of the Democrats based on the balance of power in both the House and Senate.

"If you are going to write in and say my comments are against or for something and here's why, and it incorporates a numerical or study-based comment, you need to have an attachment field for your comment that says here is my reference," said Helgerson.

Regarding the Denver version, the city is just following city ordinance and state statute.

"The voters do need to be able to do their research, but nowhere in these notices is there also a claim that this is fact," said Dillard. "Maybe in a future book, there can be a disclaimer of that sort, but we are following the law as written. It's something we can certainly take a look at after this election. We're always looking for continuous improvement."

Ginger Schlote is the Denver voter who wrote the argument against 2C.

"It didn't ask you for facts, it asks you for comments," said Schlote in a phone call with Next with Kyle Clark.

She pointed out that she bicycles routinely and is not "anti-bike." Schlote said the "recent study" that she referenced in her printed argument was one conducted by Tim Jackson, the CEO of the Colorado Auto Dealers Association.

In the phone call, she remembered the study as being an all day observation of traffic and bicycles on South Broadway, where there is a protected bike lane.

"They stood there all day long with clickers. I don't know how much more accurate you can be than that," said Schlote. "I feel it was accurate, what I heard. And I feel it was a legitimate study."

After the call, she provided a video link to the discussion of the study.

The "recent study" was not all day. It turned out to be a two-hour observation done by Jackson during a rush hour from 4-6p in 2019. He talked about it with Jon Caldara from the Independent Institute in January.

That link, nor any supporting information, was required to be included with the Blue Book arguments.