Colorado's about to draw its first vaccine sweepstakes winner. Did the announcement boost the state's vaccine rate? 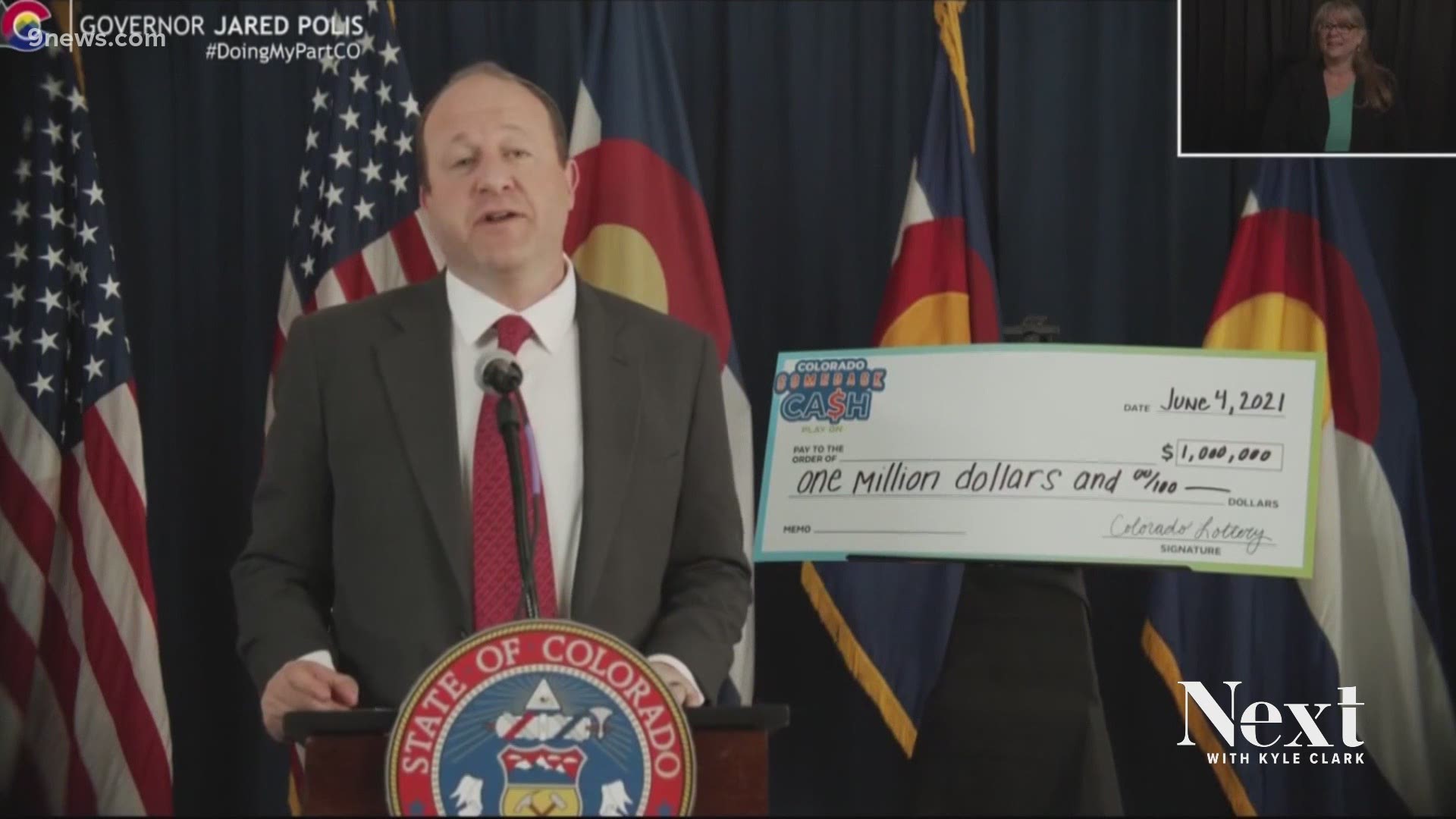 DENVER — Kids in Colorado who are not old enough to gamble have a chance at winning a $50,000 scholarship if they get the COVID-19 vaccine.

Gov. Jared Polis (D) announced the latest vaccination incentive on Wednesday. Colorado kids ages 12 to 17, who have at least dose of the vaccine, will be eligible for one of twenty-five $50,000 scholarships.

Five winners will be announced each week for five weeks starting on June 11.

This Friday, the state will announce the winner of the first $1 million prize for a Colorado adult who has at least one vaccination dose.

After Polis announced that sweepstakes on May 25, vaccination rates in the state stayed rather steady.

"What I think would have happened without this giveaway is a greater, rapid drop off in interest. I don't think anybody was expecting a spike," said Polis.

The day before he announced the five $1 million prizes, 20,947 people had received a vaccination. The day of the announcement, the vaccination rate climbed almost 14.7% from the day before, with 24,020 people getting vaccinated. Historically, Mondays have been a slow day for vaccinations. The remainder of the week, vaccinations administered stayed constant, hovering just less than 24,000 each day, before dropping off into Memorial Day weekend.

"We're looking at making sure that there's not a rapid decline in vaccination rates, that we can keep up the interest," said Polis.

RELATED: Governor announces sweepstakes for 25 $50,000 scholarships for children 12-17 who get the COVID vaccin

Am I entered in $1 million drawing?

There is that sticky area of whether or not you believe you are entered in Friday's drawing, for those who still cannot find their record through the Colorado Immunization Information System (CIIS) online.

"People should be very reassured, in general, that they're eligible for the drawing," said Heather Roth, Colorado Department of Public Health and Environment's Immunization Branch Chief.

Roth knows the ins and outs of the CIIS, especially since so many have been calling in to confirm their records.

"I will say that we've heard from thousands of Coloradans who are very excited about the drawing, and they want to make sure that they're in it. Ninety-nine percent of the people that we have assisted at the State Health Department have been in the system," said Roth.

What about the other 1%?

"The 1%, often times, are those who were vaccinated out of the state, but that live in Colorado. We don't automatically receive data from jurisdictions outside of Colorado," said Roth.

People who fit that criteria need to contact the CIIS help desk (303-692-2437, option 2) and provide information about their vaccinations.

"If they can prove their identity and provide proof of vaccination, we update their existing record in the system," said Roth.

So what is the problem? Why are people unable to find their records online if they are, indeed, recorded?

"It all starts with what information the patient provided to the provider at the time of the vaccination service, so if they provided the cell phone, provided the email address, that's step one. Step two, is the provider actually taking that information and reporting it correctly into the system," said Roth. "A lot of records do not have cell phones attached to them. A lot of records do not have email attached to them. Some records might have the name misspelled a little bit. Anything like that throws it off."

Basically, the system is as good as the people inputting the information.

"The data in the system is reported by health care providers who gave the vaccine. Mistakes can happen, right? You can actually code a home phone as a cell phone and vice versa, so those numbers get thrown into the wrong field in the system," said Roth.

It might help for Friday's winner to be among the people who cannot currently confirm their record online, but the state is hopeful you will trust the system.

RELATED: After what scientists learned from COVID vaccines, a look at the future of mRNA technology

RELATED: Here's how to check if you're in the state vaccine database before the $1 million drawing