Democratic U.S. Senate candidate John Hickenlooper was found to have violated state law twice while he was governor in 2018. 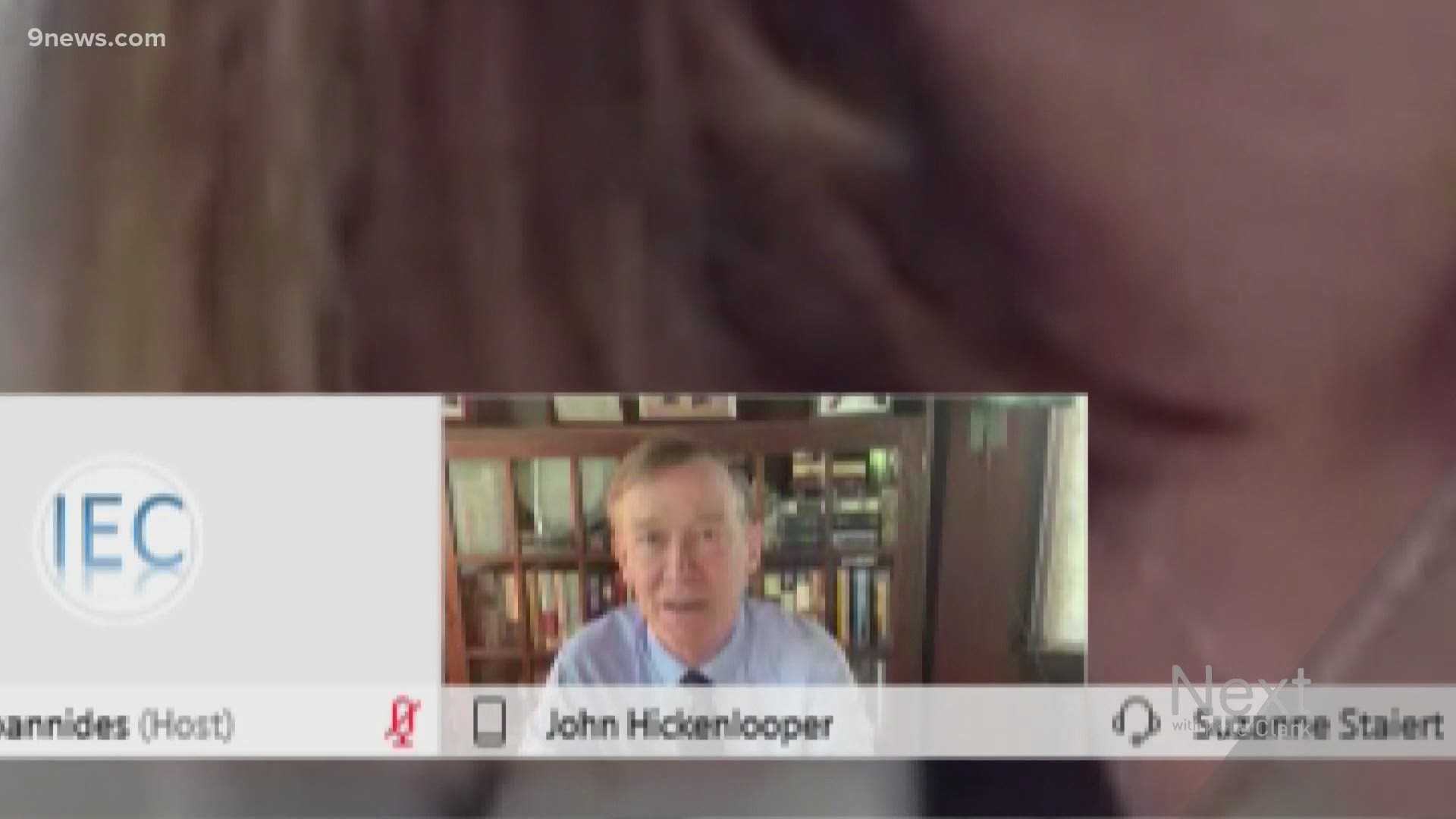 On Friday, the Colorado Ethics Commission determined he violated Colorado's constitution twice in 2018.

Amendment 41 is a gift ban, limiting the value an elected representative can accept. In 2018, the value was $59.

The commission found that Hickenlooper violated the gift ban when he flew on a private jet to Connecticut for the commissioning of the USS Colorado, and again when he traveled to Turin, Italy, for a conference called The Bilderberg Meetings.

The commission cleared Hickenlooper of four other ethics complaints regarding travel he took in 2018.

Commissioner Bill Leone, who was appointed to the commission by Hickenlooper, appeared to be the most critical.

"If we start accepting the idea that you're off not to ask, you're better off not to know, and you should just be able to blunder through life accepting benefits from conference and for-profit companies and political donors, and it's a defense to say, 'gee, I just didn't know,' I think we are in for a substantial dilution of this amendment," said Leone.

Hickenlooper testified for three hours on Friday after avoiding the commission the day prior, despite a subpoena ordering him to join the web-based hearing.

Just before Thursday's hearing ended, Hickenlooper's attorney, Mark Grueskin, told the commission, Hickenlooper would appear after all, at a later date.

"The Governor will accept and comply with the commission's subpoena. I cannot produce him today. I can definitely produce him on the 16th," Grueskin said on Thursday.

After the judge ruled to enforce the subpoena on Thursday night, Hickenlooper's Senate campaign spokeswoman Melissa Miller said, "If the commission calls him tomorrow, he will be ready."

The ethics complaint was filed by the conservative group, Public Trust Institute, in October 2018. The group is led by former Republican House Speaker Frank McNulty.

At the commission hearing on Friday, former Deputy Secretary of State, Suzanne Staiert, who is also a Republican candidate for State Senate in Centennial, began the questioning of Hickenlooper on behalf of Public Trust Institute.

At the start of her questioning, she referenced an interview 9NEWS conducted with Hickenlooper, in which he said: "You guys should be protecting me on stuff like this."

During the hearing, he confirmed "you guys" referred to journalists.

RELATED: Hickenlooper testifies at ethics hearing after being held in contempt

In a 4-1 vote, the commission determined that Hickenlooper violated Amendment 41 on a trip he took to Connecticut for the commissioning of the USS Colorado.

He flew on a private jet with homebuilder Larry Mizel, chairman and CEO of MDC Holdings, and had two meals covered on the trip.

"Were you aware of any then-pending business that he or his company had with the state of Colorado or your office?" asked Grueskin.

"No, I was not aware of any pending business," said Hickenlooper.

"Is it your belief that any time you can save time by getting on a private jet, that it's acceptable, then, for the state not to pay for state's business," asked Staiert.

In answering that question, Hickenlooper explained his legal team and chief of staff discussed what was best given the timeframe.

"I believe they look at, and try to balance, those things and addressing the decisions that we made on the schedule," said Hickenlooper.

The commission determined that he received a benefit that would not have been offered to a surrogate in his place.

In a 5-0 vote, the commission determined that Hickenlooper violated Amendment 41 on a trip he took to Turin, Italy for The Bilderberg Meetings.

Hickenlooper said he paid $1,500 that he thought covered the entire trip, including conference, travel, hotel and everything else.

"How did you get back to the airport," asked Staiert.

"The hotel scheduled us, two-at-a-time, to go back in an automobile," said Hickenlooper.

"And that was a Maserati limousine," asked Staiert.

"To be honest, I didn't notice," said Hickenlooper.

"OK. You didn't notice that you got into a Maserati limousine," asked Staiert.

"Certainly, it didn't feel like a limousine, and I didn't look or notice what the brand was," said Hickenlooper.

"You don't recall? Did you prepare for today? I mean there's, like, 100 exhibits. Did you go through them or?" said Staiert.

"No, I didn't. I'm giving the best information I can remember," said Hickenlooper.

The commission found Hickenlooper did not violate Amendment 41 for a trip he took to New York where his wife was having surgery. He stayed a few hours late and took a private jet home to make it back for his State of the State address.

He also did not violate Amendment 41 for a trip on a private jet to officiate the wedding of Kimbal Musk, nor two trips he took on the plane owned by the company of his friend, and chief of staff, Pat Meyers.

On June 12, the commission will meet to discuss penalties for the two violations. He can be fined twice the amount of the benefit that it's determined he received above $59.

The commission will also determine what sanctions, if any, Hickenlooper will face for defying the subpoena to testify on Thursday.

In a statement, Romanoff said:

"I have no sympathy for the Republicans who brought this complaint. Their outrage is hard to stomach. But it wasn’t the GOP that found Mr. Hickenlooper in contempt or in violation of the State Constitution. It was Colorado’s Independent Ethics Commission."

"The Republicans who launched these attacks pursued 97 allegations, and the Commission dismissed 95 -- a result that shows you they’ve been focused not on the facts but on political smears. Governor Hickenlooper spoke today about how he followed the guidelines in his travel to bring business to Colorado, which went from 40th in job creation to number one in the country while he was governor. We fully expect the special interests who’ve exploited this process to continue to mislead Coloradans with negative attacks because they know John Hickenlooper will be an independent voice in the U.S. Senate."

Hickenlooper and Romanoff will take part in a 30-minute primary debate on Tuesday at 6:30 p.m. on 9NEWS. The winner of the primary will challenge Republican Sen. Cory Gardner on the November ballot.