Who is Gregg Smith? Meet the man who went viral for tweeting he will take on Lauren Boebert in 2022

Gregg Smith's tweet announcing his campaign 22 months before the 2022 election has gotten more than 150,00 likes and comments from celebrities. 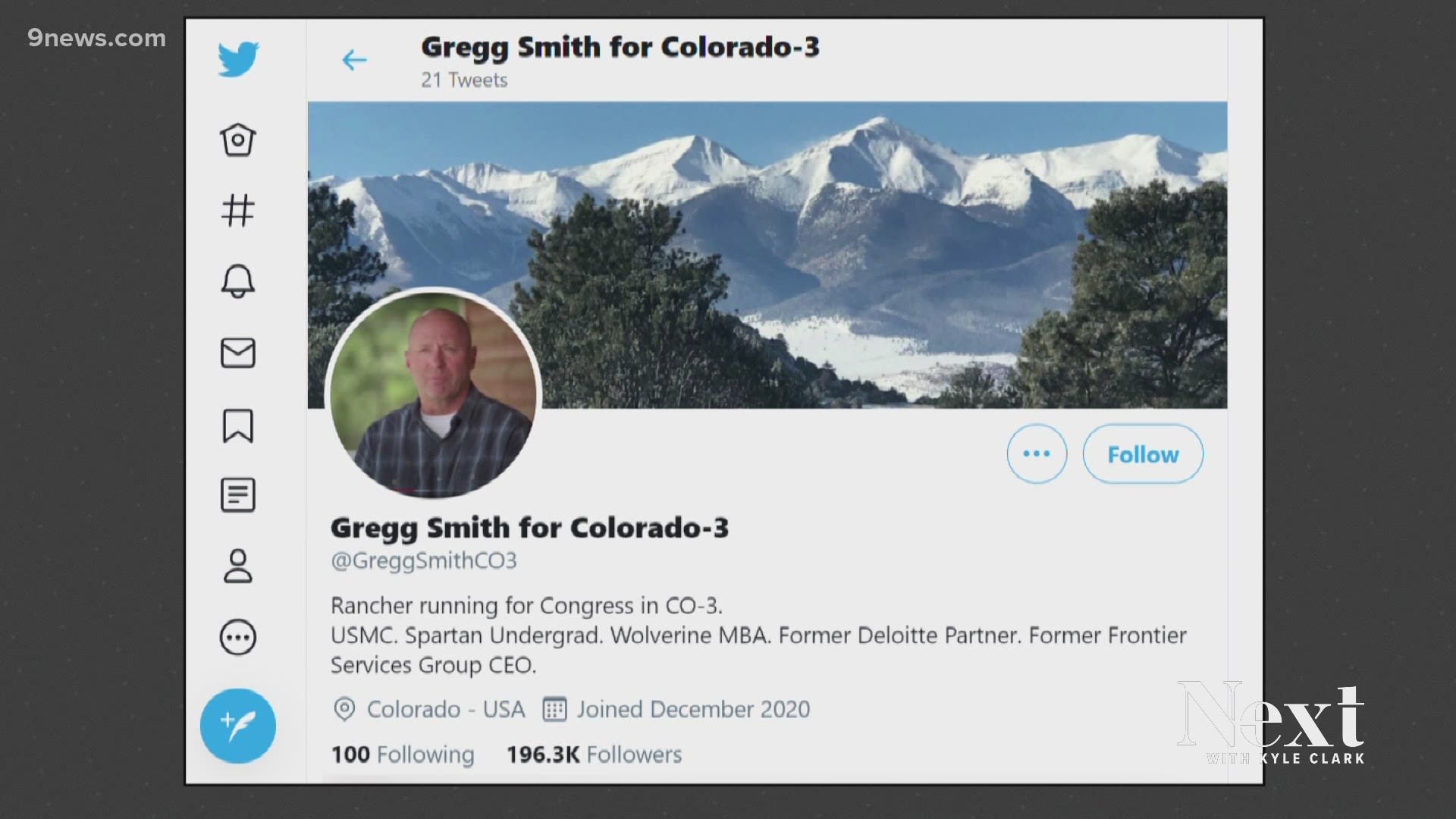 DENVER — Who is Gregg Smith?

There are eight Gregg Smiths who are registered to vote in Colorado, and one of them recently became very popular on Twitter for announcing a political campaign 22 months before the 2022 election.

Gregg Smith posted on Twitter over the weekend that he has "tested the waters" and will be running to replace Republican Congresswoman Lauren Boebert, who represents the 3rd Congressional District covering the Western Slope and southern Colorado.

🚨I've tested the waters. I am running for the US House of Representatives Colorado-3 to replace @laurenboebert. Official filings and fund raising should be in place by Monday. I'm meeting with our campaign team this weekend. Many thanks and please retweet and follow.

His tweet has gotten more than 150,000 likes and has been retweeted more than 43,000 times, including comments from actors Mark Ruffalo and Edward Norton, who have more than nine million Twitter followers combined.

But really, who is Gregg Smith?

He lists his home as in Westcliffe, which is in Custer County an hour west of Pueblo.

He's a Democrat, at least as of Jan. 29, when he changed his voter affiliation to Democrat from unaffiliated the day before he filed his paperwork to run for Congress.

Who is Gregg Smith?

The Colorado Democratic Party and the Custer County Democrats are asking the same question.

"This thing took off like a fireball, and we're still catching up a little bit," Smith told Next with Kyle Clark in an interview from his ranch in Westcliffe. "We moved here in July, and I haven't spent a night away from here since."

Smith is real, but is he spectacular?

"I did not know I sent out a viral tweet," Smith said. "I truly thought I was tweeting out to some of my friends. I was completely flabbergasted."

Smith said he doesn’t know the celebrities who shared his post, but knows people who know them.

"I know friends of theirs, so I'm one off from them," Smith said.

He said he announced his candidacy for a race 22 months away because of the insurrection at the U.S. Capitol on Jan. 6.

"I was so appalled and so disgusted, this is something I never planned on doing, but I said, well, what can I do?'" Smith said. "I'm like, 'you know what, I can run for the Congressional seat held by someone who very well may have had something to do with this event.'"

He's alluding to Boebert, whose office has not yet responded to an email requesting an interview for this story.

Smith, who was registered as an unaffiliated voter on Jan. 28, changed his voter registration on Jan. 29, and then filed his candidacy paperwork on Jan. 30.

"The bottom line is, I talked to a lot of people in (Congressional District Three) and nobody knows where this guy came from," said Bri Buentello, a former Democratic state representative from Pueblo.

Buentello was immediately suspicious on Twitter and posted replies to Smith's tweets that voters were getting catfished, or duped, by a fake candidate.

"I mean, I guess, I've got that much reporter in me," said Buentello about her research into Gregg Smiths in Colorado. "It was really odd to me that, first of all, it's somebody who's running for Congress in Democratic politics that I've never heard of, and the even weirder thing is that absolutely none of my west slope friends have heard of him either."

Even the Custer County Democratic Party, where he now lives, hadn't heard of him.

"My understanding is Mr. Smith is using Twitter as his primary information space, and I'm not a Twitter person," said Custer County Democratic Party Chair James Gilbert. "It would be advantageous for me to know who they are, however, we encourage anyone who thinks they're a qualified candidate to go ahead and run."

The only other candidate to file paperwork to run for the Third Congressional District is another Democrat, Colin Wilhelm, from Glenwood Springs.

What did Smith mean when he tweeted, "I've tested the waters" in his now viral tweet?

"It was, basically, I got the OK from my family," Smith said.

His social media popularity has outpaced his candidacy.

His campaign website currently lands on a page that says, "Guest area, please enter the password below."

"Yeah, it's not up yet, I'm surprised you're even getting that," Smith said.

As for the Colorado Democratic Party not knowing who he is, Smith said it's not like he didn't reach out.

"Three days before I sent that tweet out, so it must have been last Wednesday, I called the Democratic Party here in Colorado, and I basically said, 'Hey, I'm Gregg Smith. I'm a rancher. I live in Westcliffe. What are you going to do about this Lauren Boebert thing? Give me a call back. Because if you don't have someone who's going to run, then I'm going to run.' And then three days later, I said, 'I hadn't heard back,'" Smith said.

A spokesman for the Colorado Democratic Party confirmed a voicemail was received, but was not known until after his candidacy was announced:

"Lauren Boebert is my congressperson, and I'm interested to know what you guys are thinking about in terms of running against her in 2022," Smith said on the voicemail. "If you need a candidate, and you don't have someone that you think that can defeat her, I'm a former Marine, I'm a University of Michigan MBA and a Michigan State undergrad. I would fit the bill. I'm a former Republican, but I lean hard Democrat and I would change my affiliation to Democrat. Given where I live and what I do, if you don't have a viable candidate, I think I can be."

Smith told Next with Kyle Clark that he was a Republican from 1980, when he turned 18, until Donald Trump announced he was running for president.

"If there is a better candidate to beat (Rep.) Lauren Boebert in this very diverse district, get him teed up, get her teed up, get them teed up and get them out here," Smith said. "If someone beats me out for the nominee, I'd be more than happy to support them."

"I want to make sure that when we, as Democrats, choose our nominee to go up against Boebert in 2022, assuming she isn't expelled by then, I want to make sure we're putting up the best person possible," Buentello said. "I genuinely think this might be the toughest race in the country for a Democrat, just because it's so geographically large. It would literally take millions and hundreds of hours of call time in order to flip it."

"Some mornings, I wake up in the morning, and I, kind of, hold my breath as I log onto Twitter or on to national news outlets, because that's the kind of uncertainty (Rep.) Lauren Boebert -- and I'm just going to say it -- straight up embarrassment that she brings to Pueblo," Buentello said. "I want to know that whoever does eventually run is somebody who has a background and knows what they're doing, somebody with deep ties to the community, not somebody who just moved here."

While he just moved to Westcliffe in July, he lived part-time at a ranch he owned near the Summit-Grand County line since 2008.

Smith said that Erik Prince -- the owner of Blackwater -- was a "friend of mine" for 20 years, and that the two founded a "Pan-African logistics business" together in 2013 before they had a falling out.

"I found out, as we were doing business, that Erik was actually weaponizing aircraft behind my back," Smith said. "I thought it was possibly illegal, certainly inappropriate."

Prince, who founded Blackwater, is former Secretary of Education Betsy DeVos' brother. Four security guards for the private security firm were serving jail sentences for killing 14 civilians in Baghdad in 2007, but they have been pardoned by former President Donald Trump.

Smith said the only thing that would keep him out of the race right now would be how the Congressional District lines are redrawn ahead of the 2022 election.

As reported on Next with Kyle Clark on Monday, a data delay from the U.S. Census Bureau means the independent redistricting commission might not be able to meet state Constitutional deadlines to redraw the district lines that get redone every 10 years. It's possible that areas that are currently in Congressional District 3 today, won't be in Congressional District 3 prior to the 2022 election.

"If (Rep.) Lauren Boebert gets redistricted away from me, I'd never run for that seat," Smith said.

Although, Smith could still run even if Westcliffe is drawn into a different Congressional District. The Constitution requires that a person be 25 years old, a U.S. Citizen for seven years and live in the state they want to represent, not necessarily the district.

Regardless of where the lines are drawn, Buentello is already drawing a line of her own.

"I don't know that this is the best place for a political newcomer to try to test the waters," Buentello said.