Captain Alan Kennedy is suing for reprimands he received after attending a Black Lives Matter protest in Denver and then writing a column about it. 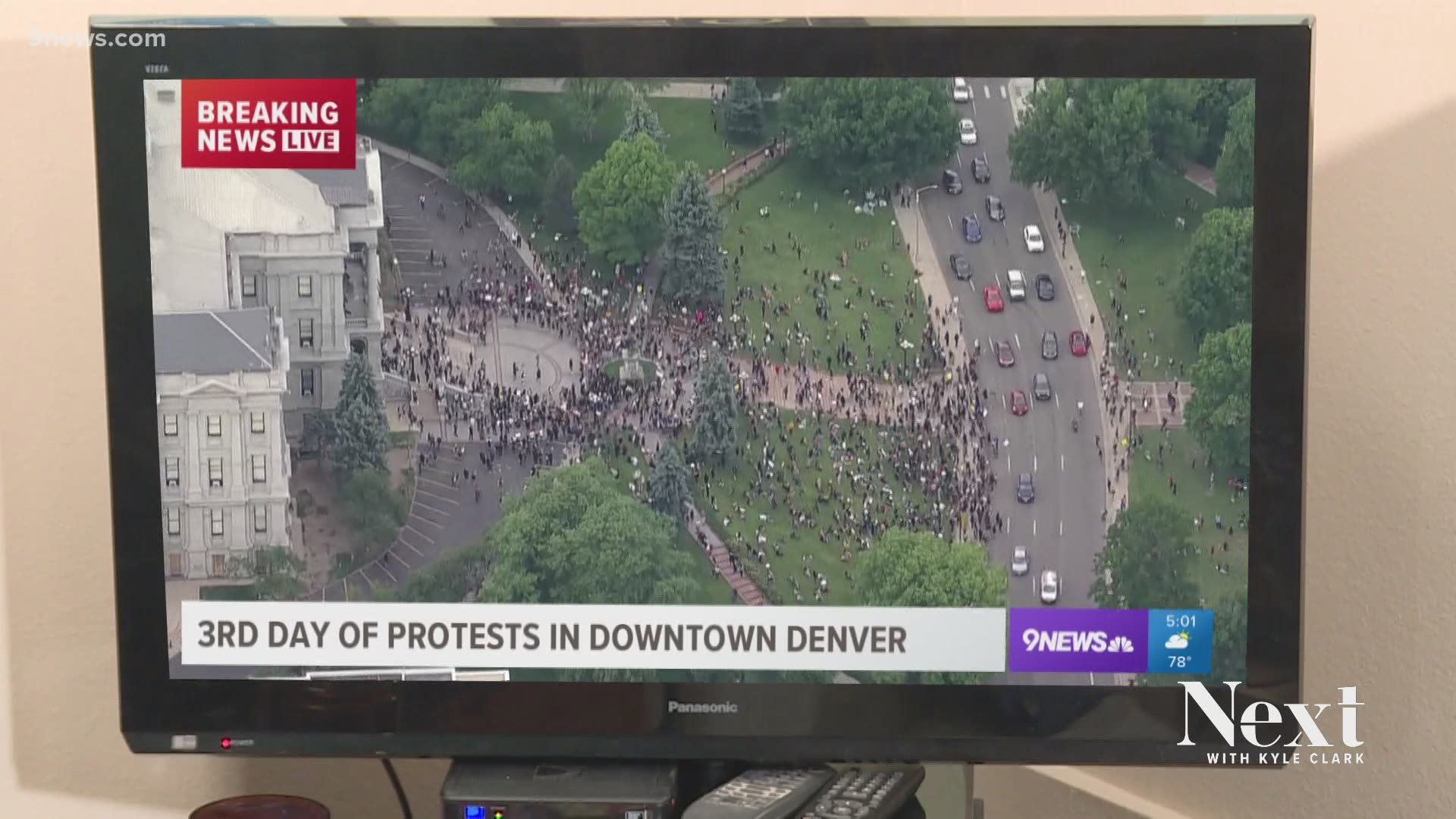 DENVER — The right to peaceably assemble, the right to protest, is at the core of the First Amendment.

Members of the military protect and defend that right. Yet, they also do not always get to benefit from it.

"Essentially, the Colorado National Guard has ordered me not to participate in Black Lives Matter protests or write op-eds about it," said Alan Kennedy.

"I'm on orders, normally, two days a month -- one weekend a month -- and then a couple of weeks in the summertime," said Kennedy. "Do you lose all constitutional rights the other 28 days?"

He was not on orders on Saturday, May 30 -- the third day of police brutality protests in downtown Denver.

"I walked a few blocks from my home in north Capitol Hill, over to the steps of the Capitol, and met up with thousands of other peaceful protestors for a march down Colfax," said Kennedy. "It was a peaceful protest against police violence in the wake of the murders of George Floyd and Brianna Taylor and Elijah McClain."

He protested and then he had a column published in the Denver Post on June 4 entitled, "Getting Tear Gassed While Protesting Gave Me Hope." His column ended with a disclaimer: Alan Kennedy is a captain in the Colorado Army National Guard and a Ph.D. student at the University of Colorado Denver School of Public Affairs. The views expressed are his own.

"I was reprimanded for both," said Kennedy.

He was investigated by the Colorado Army National Guard, similar to a 2019 investigation when he had a video op-ed published in the New York Times after serving in Syria and condemning President Donald Trump's decision to withdraw American troops.

In that November 2019 investigation, the investigating officer found "Kennedy's actions did not violate any prohibitions, limitations, standards or policies with regard to exercise of political activities, use of media or ethical standards."

On June 18, 2020, an investigation into his Denver Post op-ed found "Kennedy's actions did not engage in any political activities in violation of Army regulations, prohibitions, limitations, guidance, standards, policies or federal statute.

The investigation determined that Kennedy's disclaimer does not meet Department of Defense requirements and should be updated, though it was never brought to his attention in previous op-eds. The investigating officer wrote, "I consider this a minor violation of the Army regulatory requirement that is easily corrected without any punitive actions required."

"The investigating officer found that my participating in Black Lives Matter protests on May 30, and writing about it in the Denver Post, was a lawful exercise of my First Amendment rights," said Kennedy.

On July 12, the commanding Major issued a reprimand.

"You are hereby reprimanded for your conduct on 30 May 2020 and 4 June 2020," the reprimand started. "This investigation found that the circumstances surrounding the date of the protest indicate violence was likely to occur."

An investigation by Denver's Independent Monitor was critical of the actions of Denver Police during the May 30 protest and the protests in the days before and after.

There are times when service members can have their First Amendment rights limited.

According to Department of Defense Instruction 1325.6, members of the Armed Forces are prohibited from participating in off-post demonstrations under any of the following circumstances:

"I protested in a purely personal capacity. I was in civilian clothes, wearing a face mask, not in uniform. I was not on orders and not on duty," said Kennedy.

"In short, it is abundantly clear to me, applying the correct, objective standard, that any reasonable person should have concluded that violence was likely to result at the protest you attended on May 30, 2020. Again, while I understand and believe that you had no violence in your heart that day, my job is to protect this force, and an objective review of the surrounding circumstances clearly establishes that it was no place for a service member, much less an officer charged with good judgment, sage counsel, and interpretation of the law, to be," Beatty wrote.

RELATED: Denver protester files lawsuit claiming he was blinded by police use of 'less-lethal' round during George Floyd protests

"Trying to figure out if violence is likely to result is an impossible standard," said Kennedy. "I think that I'm being targeted for participating in a Black Lives Matter protest. The viewpoint is being targeted."

He is suing to have the reprimand removed and to allow him to participate in future protests without concern.

"It's vague, it's overbroad, it's impossible for me to go to a protest or write an op-ed without fearing punishment," said Kennedy.

Public Affairs for the Colorado Army National Guard said that no one could respond to questions about the situation.

“Due to ongoing litigation, we cannot comment," said a Public Affairs Sergeant.

Kennedy said that as a part-time member of the Colorado National Guard he makes a little more than $10,000 a year.

"The reprimands and negative evaluation are a career killer. If those remain in my permanent files, I'll never get promoted. With each promotion comes a pay raise. Your pay is tied to your rank. Not getting promoted would be a loss of thousands of dollars."

He did not know if the investigation was based on a complaint or simply his own writing.

"Ironically, the only evidence that the Colorado National Guard has that I was even there are my own op-eds," said Kennedy.

When asked if he could participate in protests and not write about them, thus not outing that he was there, he scoffed.