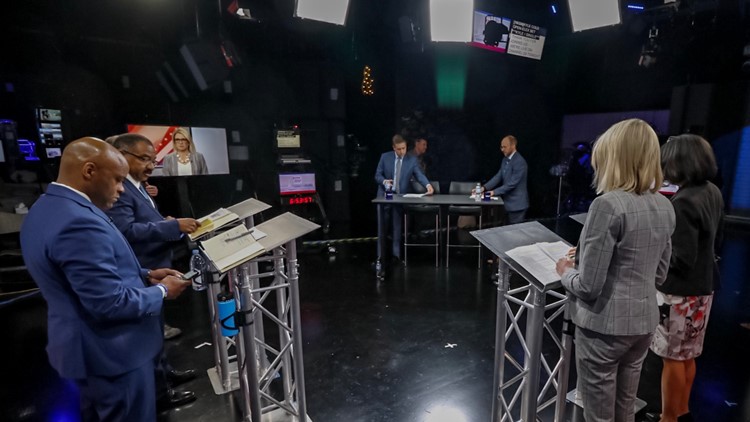 Hancock or Giellis? It’s unclear who Denver’s other mayoral candidates will support in the runoff

DENVER — While Jamie Giellis said she would have supported “anybody but Hancock” in a runoff Denver mayoral race, her opponents were not quite as direct in answering the question during the 9NEWS debate.

Giellis’ answer is now irrelevant, as she’ll be the candidate facing incumbent Mayor Michael Hancock during the June 4 runoff election.

Despite earning the most votes in Tuesday’s municipal election, Hancock is the first Denver mayor forced into a runoff election since 1995 after he failed to secure the more than 50% of votes necessary to win outright (preliminary results indicate Hancock received 38.65% of the vote to Giellis’ 24.88%).

RELATED: Denver has to vote twice in 28 days, but what if there were a different way?

Lisa Calderon, who was in third with 18.45%, said during the 9NEWS debate she would not support “anybody but Hancock.”

“I’d vote for Kalyn Heffernan, who is not here, because I think, again, she’s an important voice around the disability community” Calderon said.

Heffernan received 2.49% of the vote.

Calderon added Penfield Tate would be her next choice. He received 14.73% of the vote on Tuesday.

Tate said he’d vote for Calderon in a runoff.

In the two days since the election, neither Tate nor Calderon have clarified if she’ll back Giellis in her bid to unseat Hancock.

9NEWS Political Experts James Meija and Kelly Maher said they expected Tate to endorse Giellis, but that Calderon could be a wildcard.

Giellis and Hancock will participate in another 9NEWS debate on May 21 at 7 p.m.

This is also the day ballots for the runoff election will start arriving in mailboxes.