Tom Messina is fighting the recommendation that his building be designated historic. 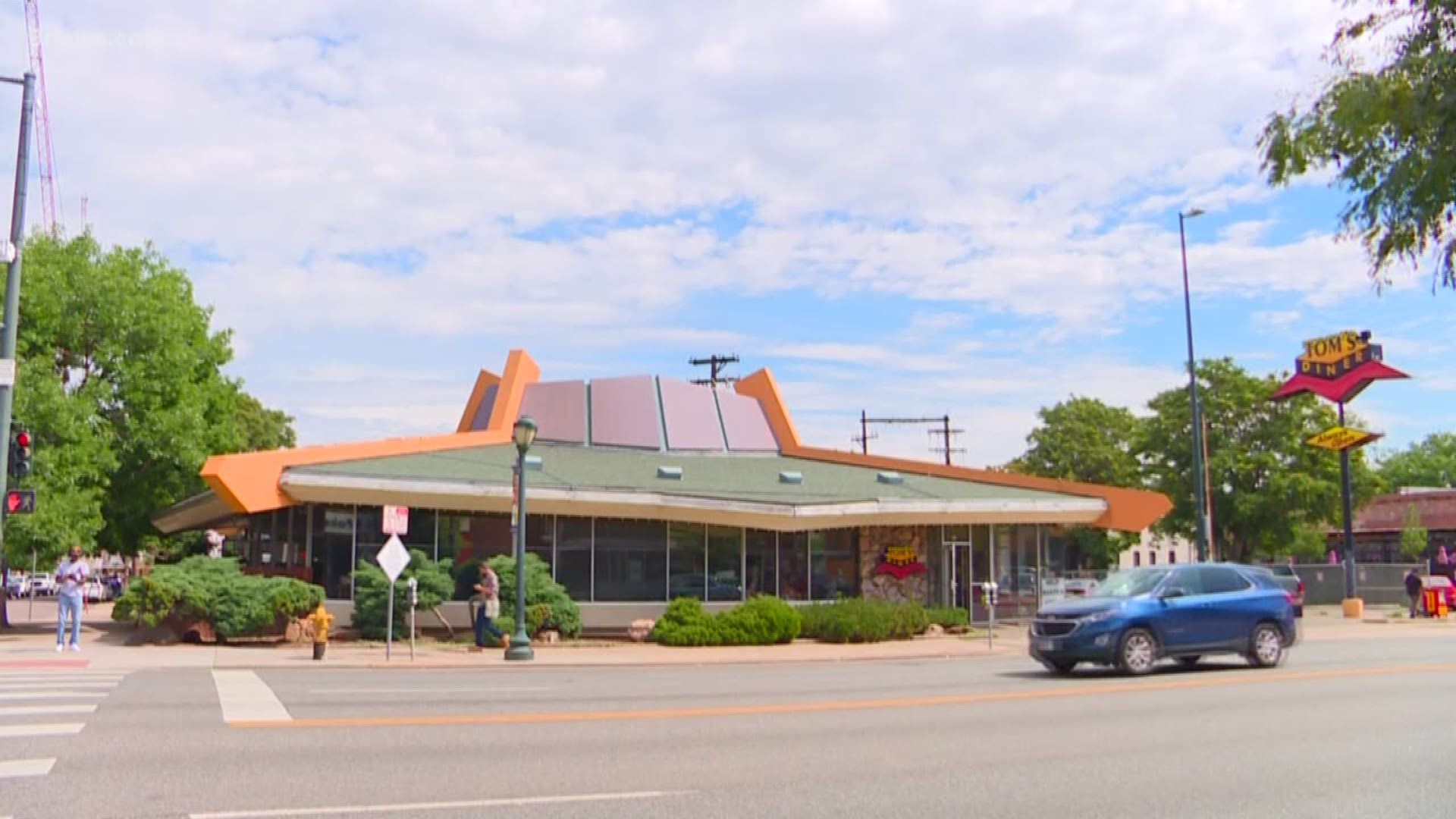 DENVER — The Land Use, Transportation and Infrastructure Committee of Denver City Council on Tuesday voted to advance the historic designation of Tom's Diner to the entire council, according to a tweet from the Denver Community Planning and Development.

In February, Messina listed the property for sale. A development company later created a mock-up conceptual plan that called for the demolition of the diner to make way for an eight-story, 113-unit apartment building.

RELATED: Longtime Colfax staple Tom's Diner is up for sale

In June, a group filed an application to designate Tom's Diner a historic landmark and the Denver Landmark Preservation Commission on Tuesday voted to recommend protection to Denver City Council. The final step in the process is a public hearing which has been scheduled for August 26.

Messina worries if the city votes to designate his building as historic, he won't be able to sell it for the price he wants.

Tom's Diner fits all the criteria of the three categories for historic designation, the Landmark Preservation Commission's wrote in its recommendation. Historic Denver said a big part of preserving the building has to do with its Googie-style architecture.

"It was sort of a roadside architecture really born out of California -- really fun and playful as people were coming back after WWII driving their cars more," said Annie Levinsky, Historic Denver's executive director. "You see it all across the country but we don’t have very many examples left in Denver." 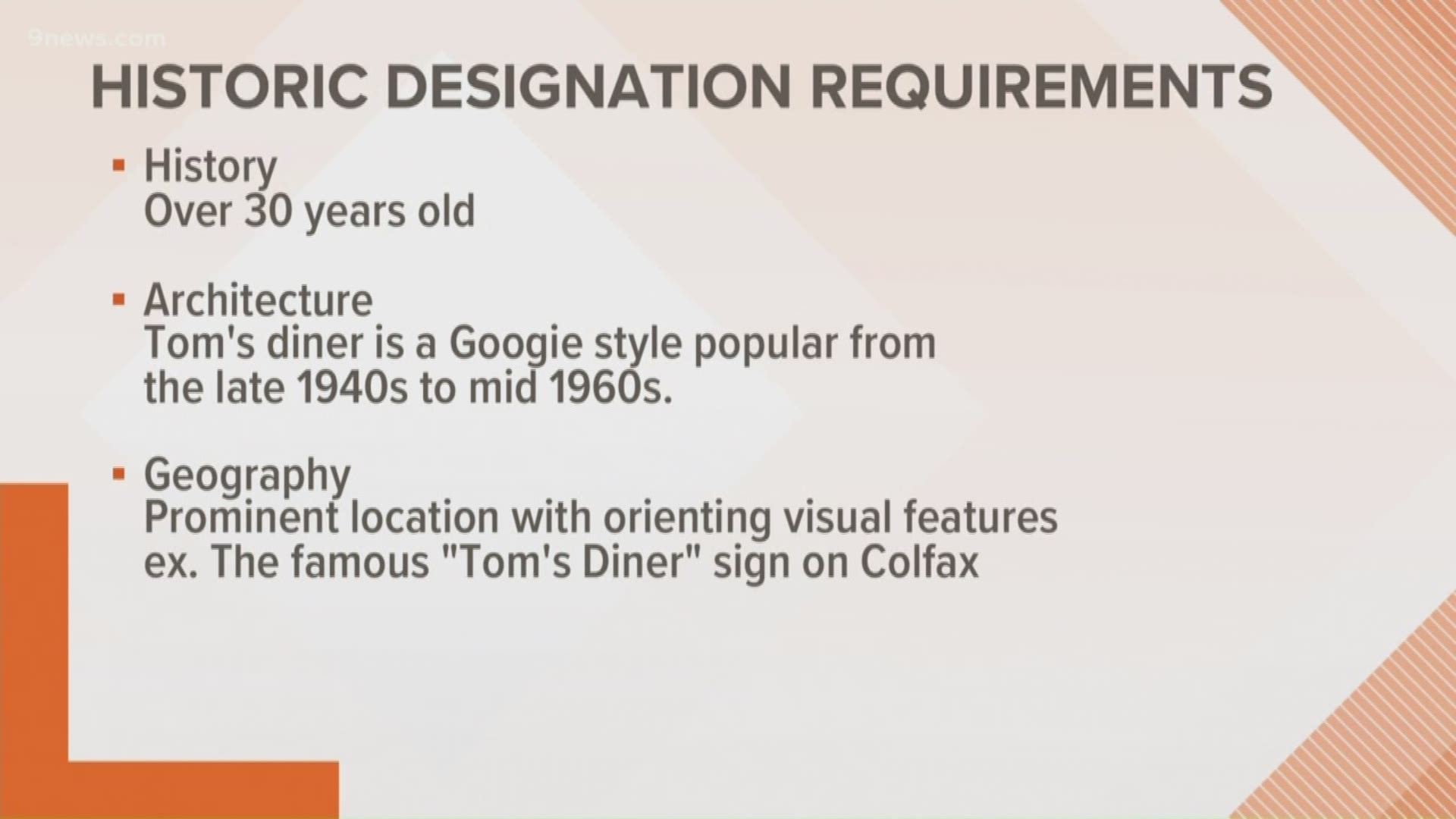 9NEWS spoke with Messina about the latest on his diner, and his decision to sell.

(Editor's Note: Responses have been edited for context and clarity).

Messina: After 20 years of working my small business on the corner of Colfax and Pearl, I've decided it was time to move on and sell my business. So I put it up for sale on the market for $4.8 million and after about a year's time, someone showed up and offered me some real money and I was very excited and counting my blessings and looking forward to retiring.

And Instead, what happened?

People I do not know showed up and they want to deem the building historic ... I'm against the decision. I feel it's more nostalgia than it is brick and mortar.

Because you could make so much more money selling it to a developer who would demolish it?

Yes, because basically my property [value] gets cut in half ... I feel like the developer's put together a beautiful building.

Credit: Tom Messina
The mock-up from Alberta Development Partners of the eight-story apartment complex that would be built in place of Tom's Diner.

What was your reaction when the Denver Landmark Preservation Commission made the recommendation on Tuesday that the city designate Tom's Diner as historic?

It was a wow. Like really? A little bit of a shock. To think that five people that I don't know have such a stake, not a stake, but have such an impact on the future of my life ...To think that what I've planned an worked for all my life can be decided by people that haven't worked it and put in the time and the sweat equity ... I feel that I've earned it, and I feel that it is my right as a property owner to be able to move on, and do as I choose.