In the 1980s, putting missing posters on milk cartons was one of the best ways to ensure people saw the faces of missing children. 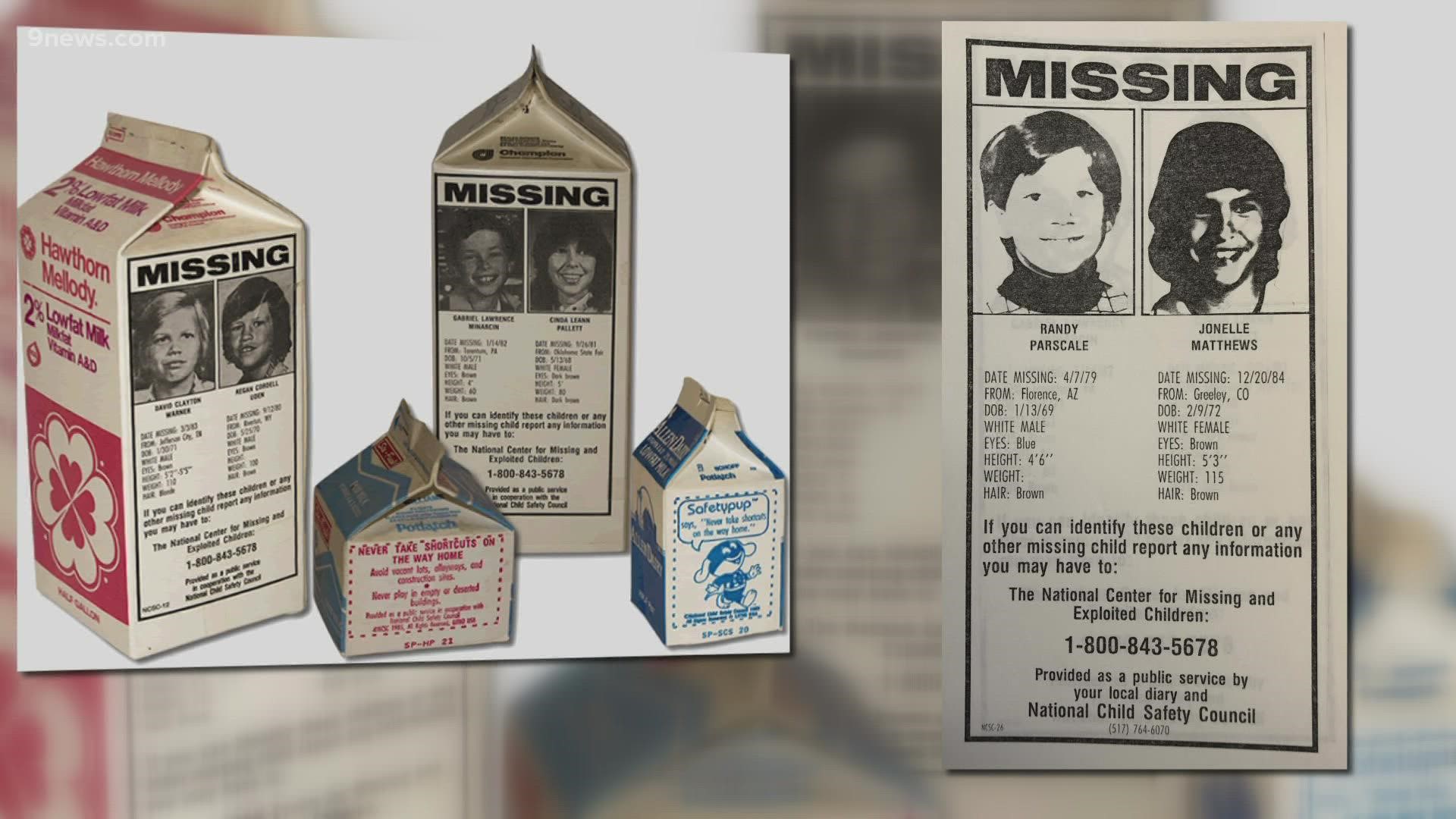 DENVER — The last pictures of Jonelle Matthews were taken at a choir concert in 1984. She was dropped off at her Greeley home after the show, but when her father returned home, Matthews was not there.

Not long after, her name and face made it inside millions of homes across the country, printed on the side of milk cartons after she went missing.

In fact, Jonelle's face was one of the first to be printed on milk cartons and sent to homes across the country, so that people having their morning coffee or cereal would see it and hopefully come forward with information. President Ronald Reagan even mentioned her name in a meeting in 1985 after her case got national attention.

After years of mystery surrounded the missing 12-year-old, oil workers found Jonelle's remains in 2019 in Weld County. While her case ended with sadness, the milk carton campaign gained attention for missing children from across the United States.

"We know for sure that it created huge awareness," said Barbara Huggett with the National Child Safety Council.

In the 1980s, Huggett was on the team tasked with getting the pictures of missing kids in front of as many eyes as possible, any way they could. She made a milk carton missing poster of Jonelle.

"Back in the 1980s, there weren’t very many ways to get the word out about these children that were missing," said Huggett. "Milk cartons were a perfect vehicle to do this because every family virtually in the United States drank milk."

Though times have changed and milk cartons hardly even exist any more, the goal of finding missing children remains the same.

"The one thing we’re looking for from the community is to look at our posters," said John Bischoff with the National Center for Missing and Exploited Children, which helped run the milk carton program. "We were an organization seeking a way to get messaging out to the community about missing children. One of those ways was the side of milk cartons."

The group can reach millions of people with the click of a button now, regardless of if people drink milk. They helped with 30,000 cases last year, posting missing posters online and in stores across the country.

"We’re able to reach many more millions of people than we ever have been before," said Bischoff. "Advancement in technologies not only helped us get our images out to the community, but it also works to help protect children."

The milk carton campaign only lasted a couple of years. One reason for that is people became too accustomed to seeing missing children posters and stopped paying attention.

That's the reason why AMBER Alerts, emergency notifications issued for children who may be in danger, are meant to be used rarely. The Colorado Bureau of Investigation (CBI) told Next with Kyle Clark they only send out these alerts for the most serious situations because they don’t want people to get numb to seeing them.

"We try and make sure that we’re using that system in the most serious of cases to ensure that we’re not sending out cases every day," said Audrey Simkins, an investigative analyst with CBI. "We just want anyone who may have seen the child or knows the family or knows circumstances about that case to come forward , so that we can bring that child or that person home."

The CBI has events in February and August to raise awareness for missing children. They also have a resource page people can visit online.

Steve Pankey was arrested and charged with Jonelle's murder. On Thursday, the jury involved in his criminal trial told the judge they couldn't come to a conclusion regarding his guilt or innocence, and a mistrial was declared.

> From 2019: Bones found in Colorado belong to girl missing for 34 years

RELATED: Steve Pankey's ex-wife describes his behavior in the days after Jonelle Matthews was killed

RELATED: Getting emergency alerts to Colorado cell phones is an imperfect system