Justin Smith is furious about how the bill is being hurried through the legislature, and he might not be able to do anything about it. 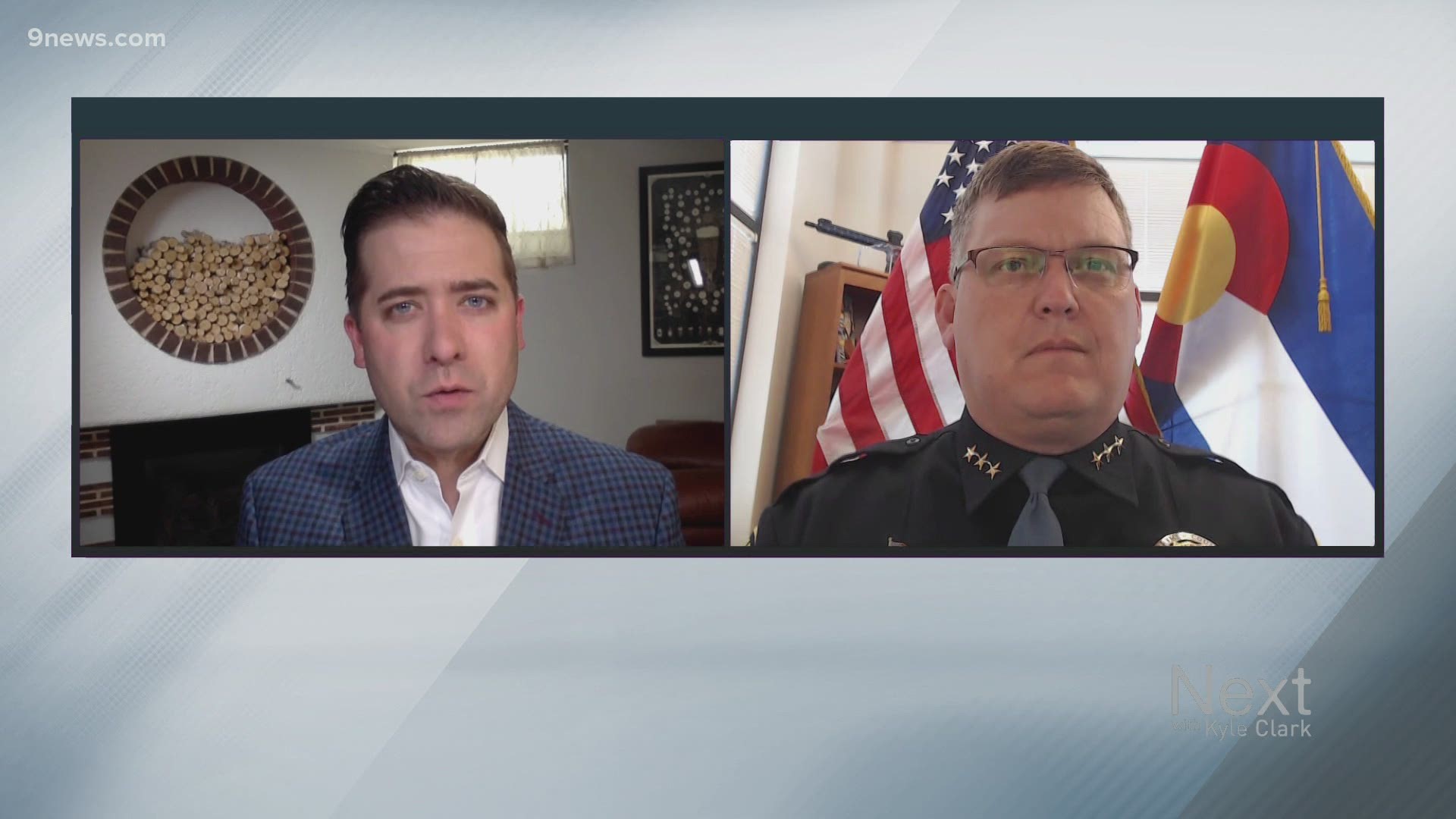 The Enhanced Law Enforcement Integrity bill was introduced on Wednesday. Lawmakers do not need Republican support for it to pass through the legislature.

The bill, Democratic lawmakers said, will strip immunity from officers for their actions and prevent them from jumping from departments after being fired. Among other specifics, it requires body cams to be worn and the video must be publicly be released. And there would be a database that contained information regarding use of force and people's demographic information if an officer makes a stop.

You can read the bill here.

RELATED: WATCH AGAIN: Racism and the Road to Change, a 9LISTENS town hall

The sheriff spoke to Next with Kyle Clark on Wednesday. Here's a portion of their conversation.

Answers have been edited for clarity, but you can watch the full interview here.

Before we discuss the specifics of the bill before the legislature what police reforms do you think Colorado needs?

Well, you know the sheriffs and chiefs have come together following what happened and what we saw in Minnesota and recognized that knowing they had the officer the actions that he took, but they had a failure to intervene by several officers on scene and that’s part of what shocked and appalled all of us that saw it. And we recognize that despite a statute that has mandatory reporting in Colorado that statute, while it is an expectation for our agency, doesn’t have a mandatory intervention requiring intervention of those. And we've actually proposed statutory change that would do that because that is what specifically came out in Minneapolis.

Are you convinced that the men and women who work under you know how to properly restrain somebody without causing harm?

There certainly are some challenges to what we refer to, the last couple of decades, as positional asphyxia. That was one of those where 30, 40 years ago there was not that recognition when you put somebody's hands behind their back and potentially pull their feet up and put them on their chest - despite the fact that that may not have been done with ill intent - that medically we understand that’s not a position to be in, and we reduce and minimize that ever happening as soon as somebody is brought into custody and is no longer actively fighting we get them out of that position. So, you know when I see that, I don’t see that as an ongoing problem. It pops up on rare occasions because there are still violent encounters you know. One on one where the officer is literally fighting for their life and sometimes those things will happen in that type of encounter but to see [George Floyd's death], where that certainly wasn’t the case - which is shocking.

Democratic state representative Leslie Herod of Denver is introducing a police accountability bill - announced it yesterday to protestors - it's getting fast-tracked through the end of this session. What are your thoughts of her proposed reforms as much as you’ve seen them?

Well, I'm tremendously disappointed, not only in Representative Herod but the whole Democratic legislature down there because as far as I'm concerned, this was an absolutely dishonest bill. Ever since the legislature has been out of session law enforcement has been talking about the things we need to do and what is going to happen in a couple of weeks to deal with the budget. And there's this promise not to worry that everything that goes through will be fast friendly and free. She never cared to discuss with anybody in the field who would want to be the ones to talk to about this. And it was dropped essentially about 6 o'clock yesterday morning as a draft with no number on it with a general invite that she would have a Zoom discussion with us for one hour yesterday. And so we see this bill that’s 25 pages. Kyle, it literally upends public safety, the criminal justice system as its been built, not even by statue for decades but by case law that’s developed and it doesn’t say, 'Hey let's discuss these issues.' It simply was a bill that was 25 pages it was wiping out tenants and principals of criminal justice, and It felt like to me was that somebody snuck up behind you, Kyle, and put a knife to your throat and said, 'I'm here to negotiate your safety,' and that's what it felt like. Because what she told us is here's the bill, it's going to pass, if you want some changes, offer up your changes -- so it really frustrated me.

Pretend qualified immunity goes into effect tomorrow for all the folks that work under you. What would practically change in the way they do their job and work with the public?

What practically is going to change is this is not going to be nearly as safe a community because the people in this state count on their police officers being out there to confront people that are potentially violating the law. But any time an officer does anything in the field, they're risking their children, their wife, their family's financial future for the first $100,000 of a lawsuit. Why would they go and intervene? The courts determined a long time ago that there's not a legal duty to intervene and stop a criminal act. Amazingly people don’t realize that, and so that officer, why would they go out there? The other part that I think this brings into it, you realize -- it's a difficult job. It's hard to get folks to come into this profession these days, who's going to apply for that jon? There's other jobs that pay this amount of money and certainly more that don’t have that risk. So if the idea on this is you want to get better officers, who with a good reason and logic is going to think that’s a wise decision? So I look at it, not simply from the officer's standpoint and that does concern me, but the community standpoint. We've got not perfect officers, but I've been around this country and there's a lot of things going on. Colorado does it certainly better than most. We've got some great folks and this doesn’t have any incentive for them to stay in the business.

Do you think that it is too easy for officers with a history of disciplinary troubles to get rehired at other departments in Colorado? That’s another thing that Rep. Herod said.

I think we certainly have some challenges. I'm on the POST board and have been for a couple of years and have dealt with these issues for some time. There have been some problems in the past. There still are problems. We've made great advancements and this bill doesn’t recognize the advancements. Just last year when the bill got put through that deals with those that are dishonest so that they can't be brought back in, and the POST board can de-certify those individuals. We had a bill not too long before that increased the number of convictions that disqualified folks from coming in. But I tell you, there is a challenge out there. But for the most part, Kyle, that’s the rural parts of our state. The ones that, you know, and you talk to folks in the Four Corners of our state and in the outlying areas where they have some real challenges financially, and they can't pay what the cities pay. When they can pay a police officer $35,000 a year, and they can make 60 or 70 in one of the cities, they cant keep folks. What I've proposed is finding ways to fund how they can hire hometown women and men to come and police and would say there. That’s the kind of thing that would be positive, but without talking to us or what the POST board has done, to throw these wholesale changes in under the guise that it's needed really is disingenuine.