DIA is threatening to cancel the renovation contract that's years behind and over budget. Two new letters go into detail about why.

DENVER — Denver International Airport spent months documenting its concerns with the company handling the Great Hall renovation before threatening on Friday to end their contract.

Representatives for the airport claim the developer, Denver Great Hall LLC, has disrupted normal activity at the airport and repeatedly failed to meet deadlines outlined in their agreement.

9NEWS has obtained two new letters sent from Michael Sheehan, the senior vice president of special projects at DIA, to Great Hall Partners CEO, Ignacio Castejon Hernandez. The letters list a total of 28 incidents in which the developer violated terms of the contract, according to the airport.

In one letter, the airport accuses the developer of failing to meet any deadlines since construction began in 2018. The section states:

“To date, Developer has not met any construction milestone deadlines set in the Baseline Project Schedule and the Approved TPP, which has significantly disrupted the Phasing Schedule of the Project and called into question their ability to meet the Key Turnover and Delivery Dates set forth in Appendix 4-E of the DA, which has caused additional and prolonged interference with Airport Activities in violation of Sections 4.1.2, 5.1.2 and 5.1.3 of the DA and TR Section I.5.6.”

DIA also alleges that the developer “failed to complete perimeter work,” causing rain to leak from Level 6 to Level 5 onto baggage claim areas earlier this month.

DIA wrote that in September 2018, the developer spilled escalator pit fluid onto the Level 4 platform. The spill disrupted activity and posed a safety hazard to travelers, the letter said. In February of this year, the developer drove equipment into an escalator, DIA said, taking it out of service for several days.

Last month, the developer allegedly caused a fire that shut down other escalators, and the damage has yet to be repaired, according to airport officials.

The issues include failing to take down temporary construction walls in baggage claim areas that were already supposed to be gone.

Letter from DIA: "Developer’s Failure to Perform the Work in Accordance with Contract Documents and Meet the Project Schedule" 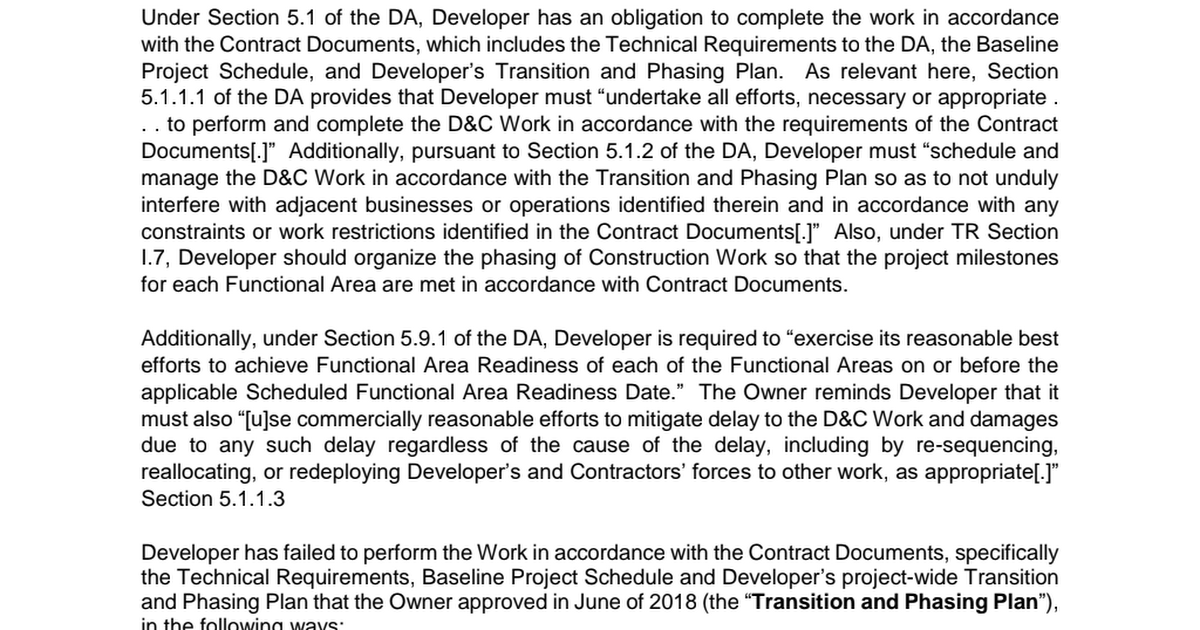 “These McCain Walls surround two domestic baggage claim areas of the Airport’s largest Airline Carrier, which has been unable to access or use these baggage carousels to transport and return passenger baggage,” one letter said.

“Airlines doing business at the airport have been unable to access or use the baggage carousels within the McCain Walls for over 7 weeks more than originally anticipated.”

The airport describes this choice as a purposeful one, saying the developer intentionally refuses to remove the walls.

And in one meeting last week, DIA took issue with a question allegedly posed by a senior-level employee of Great Hall Partners: “How much is it not legal to build without a permit?” 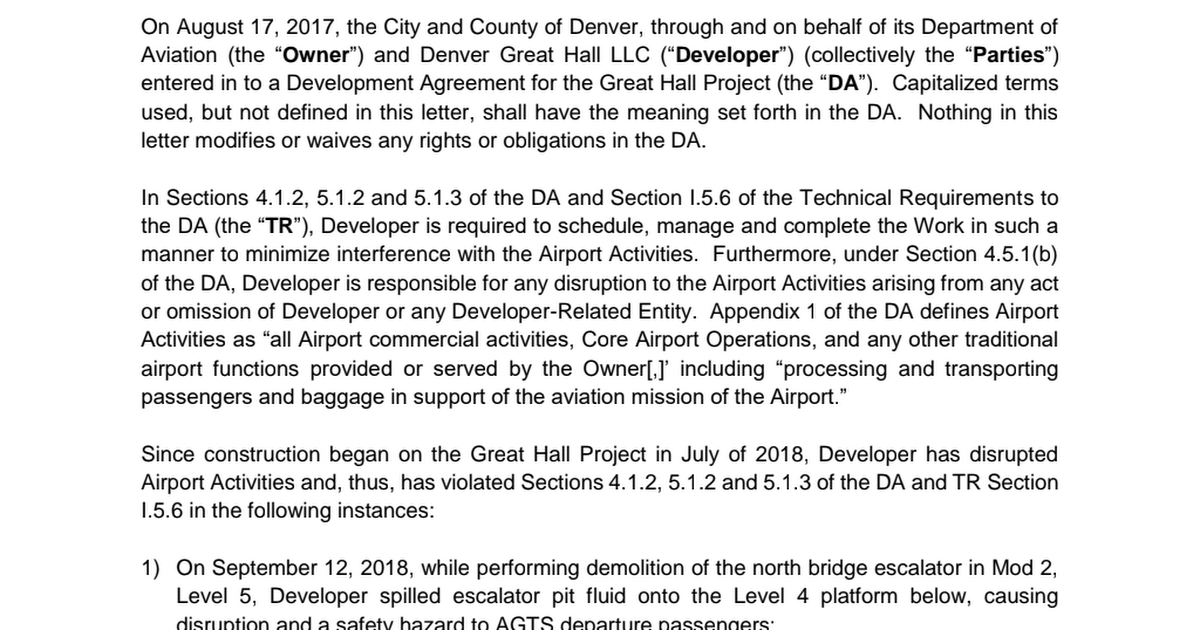 Representatives from both the Denver Building Department and the Denver Fire Department stated that they would “red tag” and shut down the work. This question showed an incredible lack of professionalism and a lack of basic understanding of what is required to design, permit, and construct a project within the City and County of Denver,” one letter said.

Denver Great Hall LLC has until Aug. 2 to provide a plan to remedy the issues, per the airport. But the developer and DIA exchanged allegations about who's really to blame for delays on Monday evening.

9NEWS asked the airport what they would anticipate happening if they choose to end the contract. A spokesperson for DIA said only that they are working to get the project back on track.