Colorado law states community associations can’t ban political signs around elections, but can make rules about all other signs. 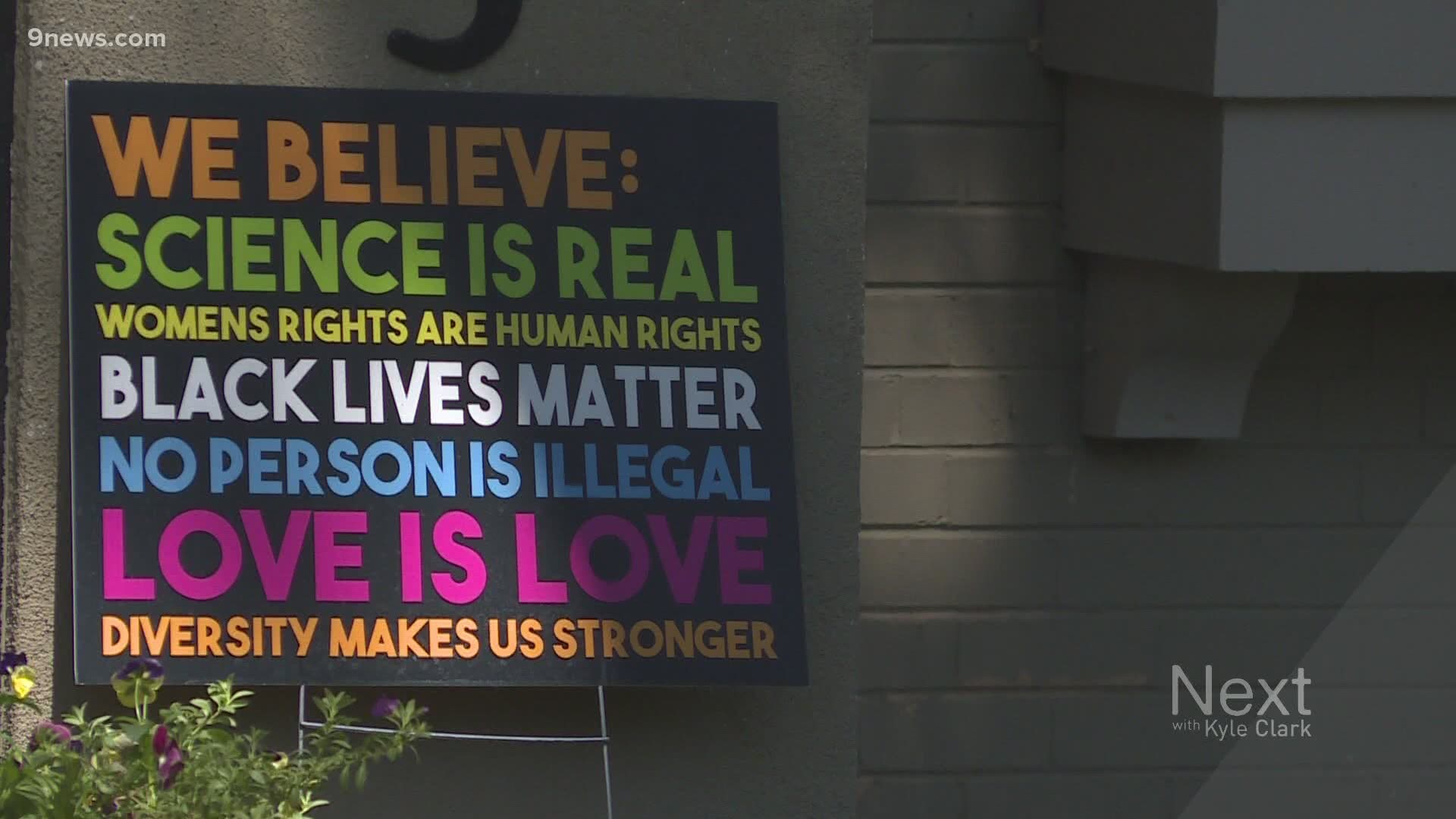 DENVER — The board of the Lowry Community Master Association decided Wednesday to allow lawn signs on neighbors’ properties after community members complained to 9NEWS about the neighborhood association’s policy.

The decision comes as several neighbors said they received violations for their signs with social justice messages in the last few weeks. The association on Tuesday told 9NEWS that it had sent approximately 150 violation notices in the last 90 days.

LCMA’s previous covenant included a provision banning all lawn signs, except political campaign signs, which are protected under state law.

The new policy, decided in a Wednesday night meeting of the board, will allow up to two signs per household, which must meet the City of Denver’s standards for lawn signs.

Melissa Steele, who has lived in Denver’s Lowry neighborhood for 14 years, posted plenty of signs on her front lawn during that time. Last Friday was the first time she was ever told she couldn’t.

Steele placed a yard sign near her door that shows her support for Black Lives Matter, immigration reform, women’s rights, LGBTQ rights and science. It’s a common sign on front lawns all across Denver.

“I guess signs like this are not allowed at all,” Steele said. “That’s my understanding now.”

The letter, dated Friday, said her sign violated the community’s covenant, which bans all signs, aside from temporary political signs connected to a campaign and other temporary signs advertising contractors or advertising a home is for sale.

“The 'no yard signs' policy maintains an uncluttered visual landscape and supports and enhances this perception of a peaceful, more natural place,” a letter attached to violation reads.

Colorado state law governing homeowners and community associations specifically states an association cannot ban homeowners from displaying a political sign immediately before or after an election.

But the law does allow associations to make rules about other signs. Lowry’s provision had banned all other signs, including signs without what could be perceived as a political message, such as a thank you for pandemic responders or a sign advertising support for a school.

The Lowry Community Master Association sent approximately 150 letters to homeowners regarding signs in the past three months, according to someone with knowledge of the letters.

An attorney for the association on Tuesday, ahead of the Wednesday's policy change, provided the following statement to 9NEWS on on the association’s behalf:

"Since its transition from a U.S. Air Force base, the Lowry neighborhood has been a covenant-controlled community to help protect and preserve it’s unique and historic appearance. Lowry’s long-standing yard signage policy, which is in-line with state law, is part of its community guidelines and continues to be regularly enforced. The Lowry Community Master Association is aware of resident concerns regarding that policy and, as with all community concerns, is taking them under consideration to ensure the guidelines best represent the community."

Following Wednesday's board meeting, the lawyer released another statement, saying:

"Given the exigent circumstances and the board’s desire to help our community express support for issues they endorse, the LCMA has amended the community signage policy to allow two yard signs. This policy is effective today, September 3, 2020. The association will continue to seek input from the community if future modifications to Lowry’s signage policy are needed."

Sign rules have become a relatively hot topic in homeowner’s associations as of late.

Loura Sanchez, a member of the local Community Associations Institute, a group that advises homeowners and associations, said her group has received a lot of phone calls and e-mails about signs in the last two months or so.

Sanchez said after the presidential election in 2000 ended with a contested result, community associations saw an interesting trend.

“We saw a significant number of more challenges to an election… something that previous homeowners wouldn’t have cared, you vote for the board they get elected that’s the end of the story,” Sanchez said. 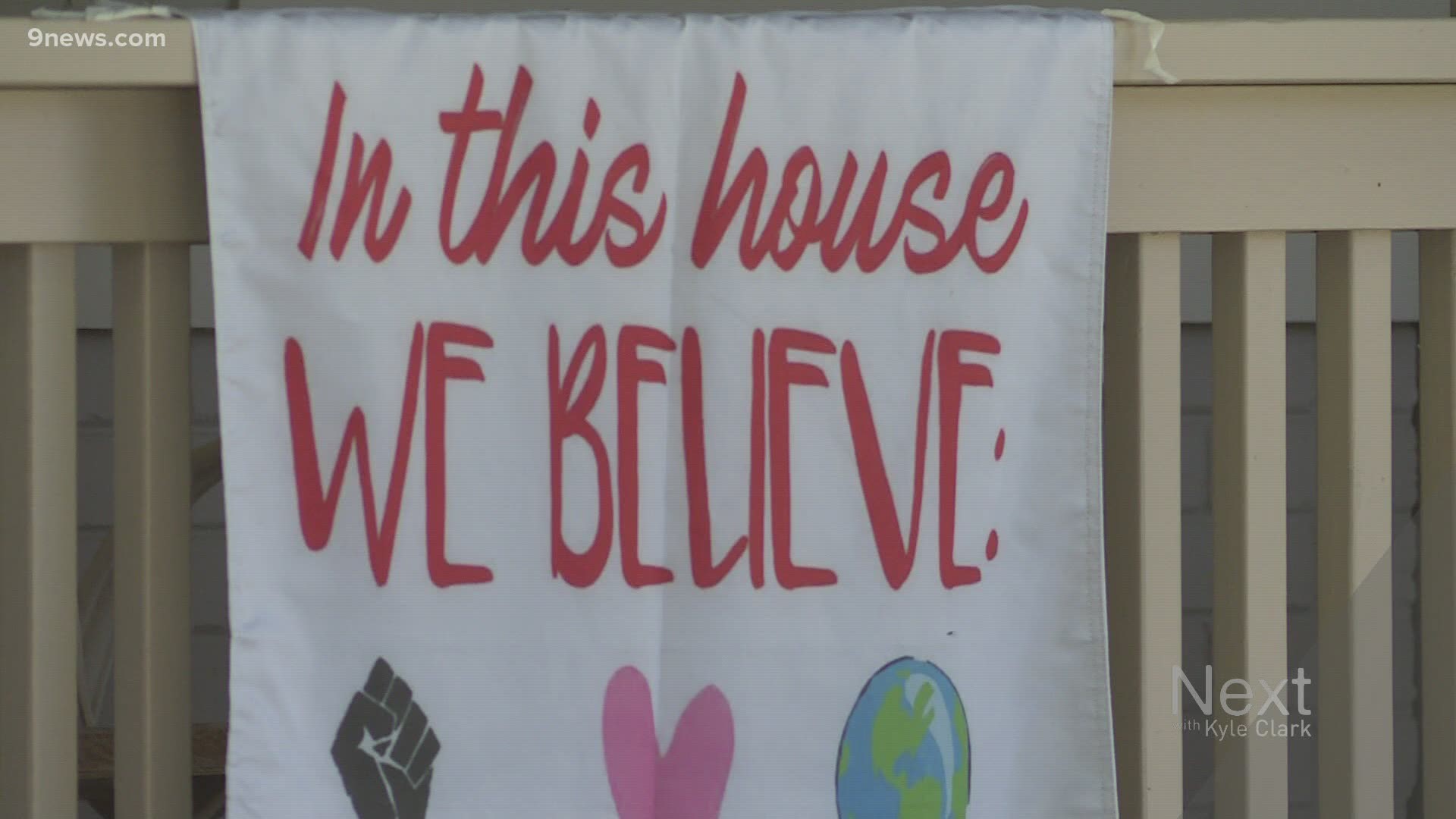 She said, while she can’t give specific legal advice, her team has suggested community associations take this tense political time as an opportunity to explore how their communities feel about the current rules.

“Sometimes documents aren’t reflective of the community at a time so there’s a reason and a need to look at the situation and to explore what the various options are,” she said.

Steele, the homeowner in Lowry, said Tuesday she thinks the signs should be allowed.

“And, of course, there may be signs that come up that don’t fit with these same beliefs and those people should be allowed to share their beliefs as well," Steele said.

“This is a time when we can’t communicate as normally as we did prior to COVID, so I think this is a chance for people to express some of these things that they feel strongly about,” she added.

Under the new policy, signs at homes in the Lowry neighborhood must follow the City of Denver's guidelines:

Political and noncommercial signs are limited to the following types: