Would you like to know what the fracking conversation in Colorado has come to? Well, you'll notice extra security at a state meeting this week to discuss an anti-fracking ballot question. 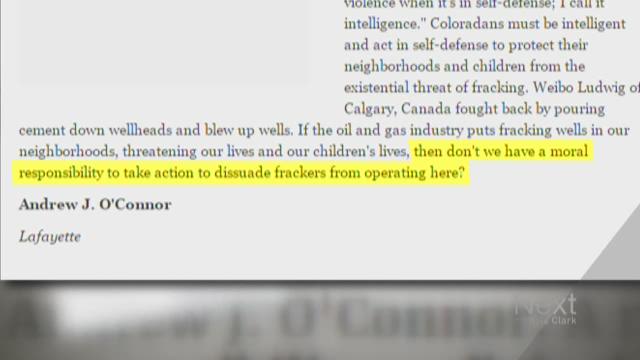 Would you like to know what the fracking conversation in Colorado has come to? Well, you'll notice extra security at a state meeting this week to discuss an anti-fracking ballot question. That question is being pushed by a guy who says it's morally responsible to blow up oil wells and "eliminate" energy workers.

Call this observation biased, if you want, but if you're hinting at killing your opponents, you've probably lost the argument. Anyway...

The Boulder Daily Camera published a letter to the editor from a man named Andrew O'Connor, who finished his argument against fracking with this:

"If the oil and gas industry puts fracking wells in our neighborhoods, threatening our lives and our children's lives, then don't we have a moral responsibility to blow up wells and eliminate fracking and workers?"

"Those workers are the same people who will be in the room at the title-setting process," says Deputy Secretary of State Suzanne Staiert. She has to set up a meeting where O'Connor and the oil industry will both be there, arguing over a tax increase that O'Connor wants to put on the ballot.

That meeting would normally happen at a downtown Denver office building that houses the Secretary of State's office, but Staiert says they have to delay that meeting and find space in a secure building with metal detectors, because of the what O'Connor wrote.

"From this point on, that will be a security obligation that we're obligated to take," Staiert says.

Next talked to O'Connor by phone and said he was not advocating for blowing up people, just the oil wells.

"The only one who would argue that is some Republican, some conservative a**hole from oil and gas ... the Secretary of State is being ridiclous drama queens it doesn't mean that at all."

When he wrote about "eliminating" workers, O'Connor says he meant putting them out of work, not hurting them.

The Boulder Daily camera edited that line of letter, to remove the reference to blowing up things, and the opinion editor there says it was a mistake to publish it the first time. The editor's note says this:

Editor's note: This letter was edited to delete references that may have been construed to expressly advocate violence or property destruction. The Camera does not condone or endorse violence or property destruction of any kind. However, the letter presents a philosophical question the Camera believes is worthy of community conversation in the context of the ongoing discussion over fracking.

Editor Dave Krieger, who wrote a column about this line slipping into the editorial section, also gave Next this statement:

The short version is I screwed up. I process a lot of reader submissions and the final few words of this one just got by me. When something doesn't register in your brain, it's hard to go back later and determine why. It just didn't. No excuses; I screwed up. I acknowledged the mistake in my column and said I regretted it profoundly, which I do.

As to leaving the edited version up, as I mentioned in the column, we took note of the fact that the state Senate considered a bill to increase penalties for tampering with oil and gas facilities. The Lafayette City Council considered an ordinance that would have made illegal acts in defense of the environment legal. With legislative bodies clearly anticipating such activities might take place, the question we wrestled with was whether we should prohibit people from discussing them in our open forum. The answer we arrived at was we should permit discussion of such activities on a philosophical level, but not threats to undertake them. Admittedly a tough line to draw, but when public officials are anticipating the possibility of such things, we couldn't see how it made sense to prohibit discussing them.