You might not know his name, and you probably don’t know his face, but there’s a good chance you know of Jeff McNamara. 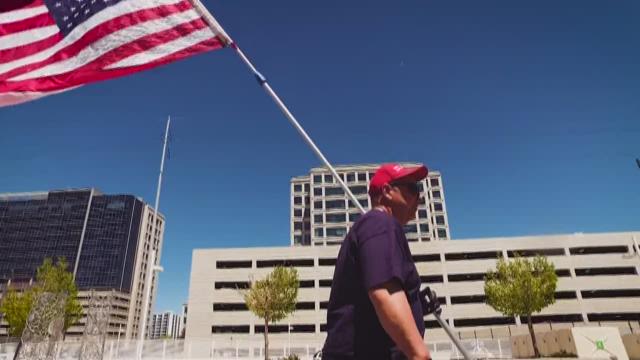 You might not know his name, and you probably don’t know his face, but there’s a good chance you know of Jeff McNamara.

Drive down a highway around Denver and you’ll see him, and his American flag, up above.

“They don’t know who I am. They just know I fly the flag. I can go to any group in this town and mention I wave the flag off of the highways, and half of the people in there have seen me,” he says.

Back in November, as America neared what felt like the election of the century, McNamara wanted to unify his country – or at least the people driving around town. The flag is his way of bringing the country together, no matter who you voted for.

“Somebody told me that if there’s anything you can do to change the outcome of this election, get off you’re dead a** and go do it. I thought, well I could go stand on a highway and wave a flag,” he says. “The Lord told me to do it. It was something positive. I was a little nervous when I first started out but now I go anywhere.”

“Thanksgiving morning was memorable. There was about 60-70 mile an hour winds, and it blew the flag completely off my pole. I was hanging onto it with my hands and when I tried to walk off the bridge it blew me into a fence,” he laughs. “I got the idea that maybe there are some occasions when you’re not supposed to do this. Bent my pole. That was fun.”

This isn’t a full-time gig. Usually, McNamara, who installs water purifiers, strives to make it out a few times a week. He carries the flag in his car for whenever an opportunity comes. When they can, his sons come too.

McNamara never served in the armed forces, but his father did. He has great respect for veterans, and says they seem to appreciate him. He notes that veterans often walk up to him and thank him for what he’s doing.

Reviews from others are mixed. Rarely can a few minutes pass without the sound of car horns blaring in support. McNamara, who – on the day we spoke to him – is wearing a hat in honor of President Trump, says there are plenty of haters, too.

“I had someone try and run me over on the Highway, on 285. That was new,” he says laughing. “I’m sitting here with a flag and my boldness and they’re yelling at me because you know, maybe something bad happened to them. I don’t know their story, right? So I gotta give them the benefit of the doubt. Maybe they’re having a bad day. I don’t know, their dog peed on them. Whatever it is.”

McNamara has no plans to stop for now, as long as it seems the country needs it.

“It’s time to enjoy one another. It’s time to appreciate what we have in common. It’s time to care about each other. Be good neighbors, and I think waving the flag does that,” he says.

RELATED: A few thoughts on what happened after our story about 'the flag man' 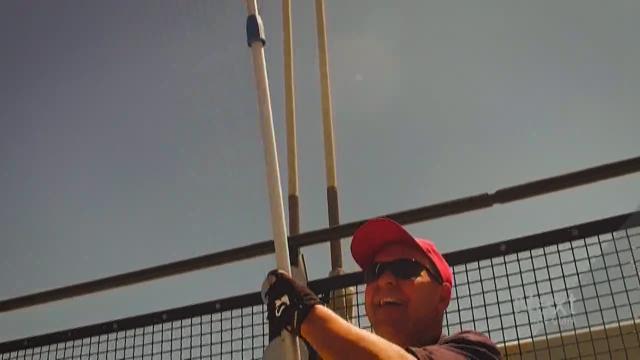