Peters hasn't been seen publicly in Colorado since investigations regarding compromised election software began in August. 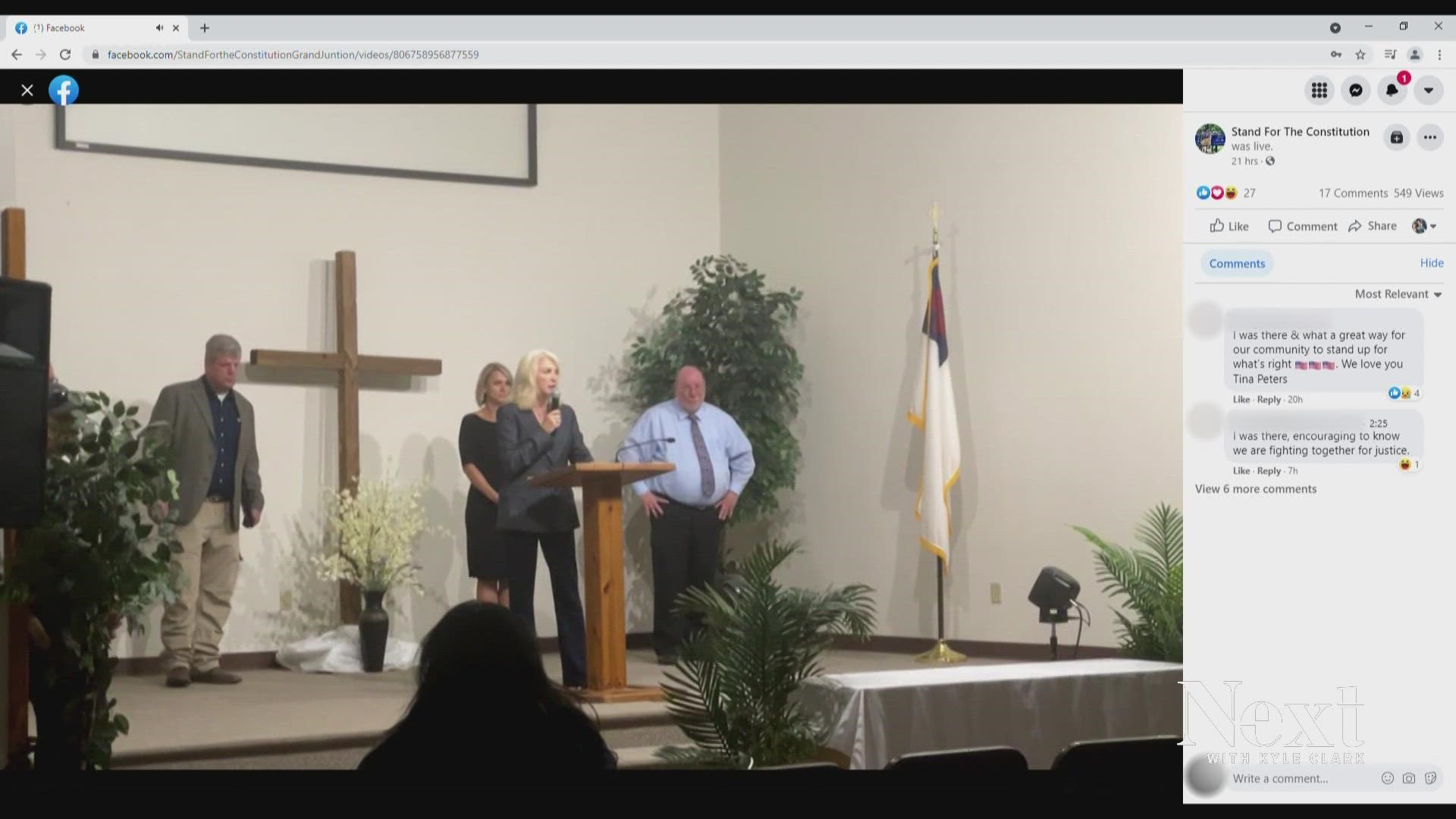 DENVER — Mesa County Clerk and Recorder Tina Peters on Thursday appeared at a public event in Colorado for the first time since investigators began looking into her and her department because of a data breach.

Peters spoke at the event dubbed "Stand With Tina," which was held at Appleton Christian Church in Grand Junction.

"Thank you for being here and welcoming me back home -- our home. Together, we can fight back and take back our county and our country," she told the crowd.

Peters said she has been "working remotely" since last month when the Colorado Secretary of State's (SOS) Office announced the county's voting technology passwords were posted online. Secretary of State Jena Griswold (D) has also accused Peters of being in a secure room with the county's compromised election equipment after hours and with someone who did not work for the department. Griswold said security cameras were turned off at the time.

In her speech, Peters said Griswold is playing politics to prevent audits into the 2020 election and Dominion voting software.

"Some powerful people don’t want us to look at the facts. In fact, they’re trying to remove me as the Mesa County clerk and recorder just for doing my job," she said. "It’s places like Mesa County that can be the catalyst to take back our country, and we need your help, and it starts today."

Peters said her concern about voting irregularities started because of calls from hundreds of worried voters in Mesa County.

She remains under investigation by the SOS, the local district attorney's office and the FBI. She asked people to donate money to support her legal battles at StandWithTina.org.

Before Thursday, Peters was last seen publicly at Mike Lindell's symposium that highlighted voter fraud conspiracies without providing proof of fraud. Lindell, the CEO of MyPillow, has said previously that he was hiding Peters.

The three Republican Mesa County Commissioners voted in late August to get new Dominion machines to replace the compromised technology. They also voted to extend the service agreement for eight years and purchase a "Dominion Ballot Audit Review" service for $3,300 per election.

We are glad Tina is back on the job.  Even though she has been removed as the Designated Election Official by the Secretary of State, she still has responsibilities for the DMV and Recording Division.

Election integrity is important. We continue to cooperate with law enforcement’s investigation into the matter and now that Tina is back we hope she will too.