Mesa County COVID vaccination site was letting anyone sign up

Mesa County recently started filling open appointments with the general public, anyone 16 and older, even before Colorado gets to Phase 1B.4. 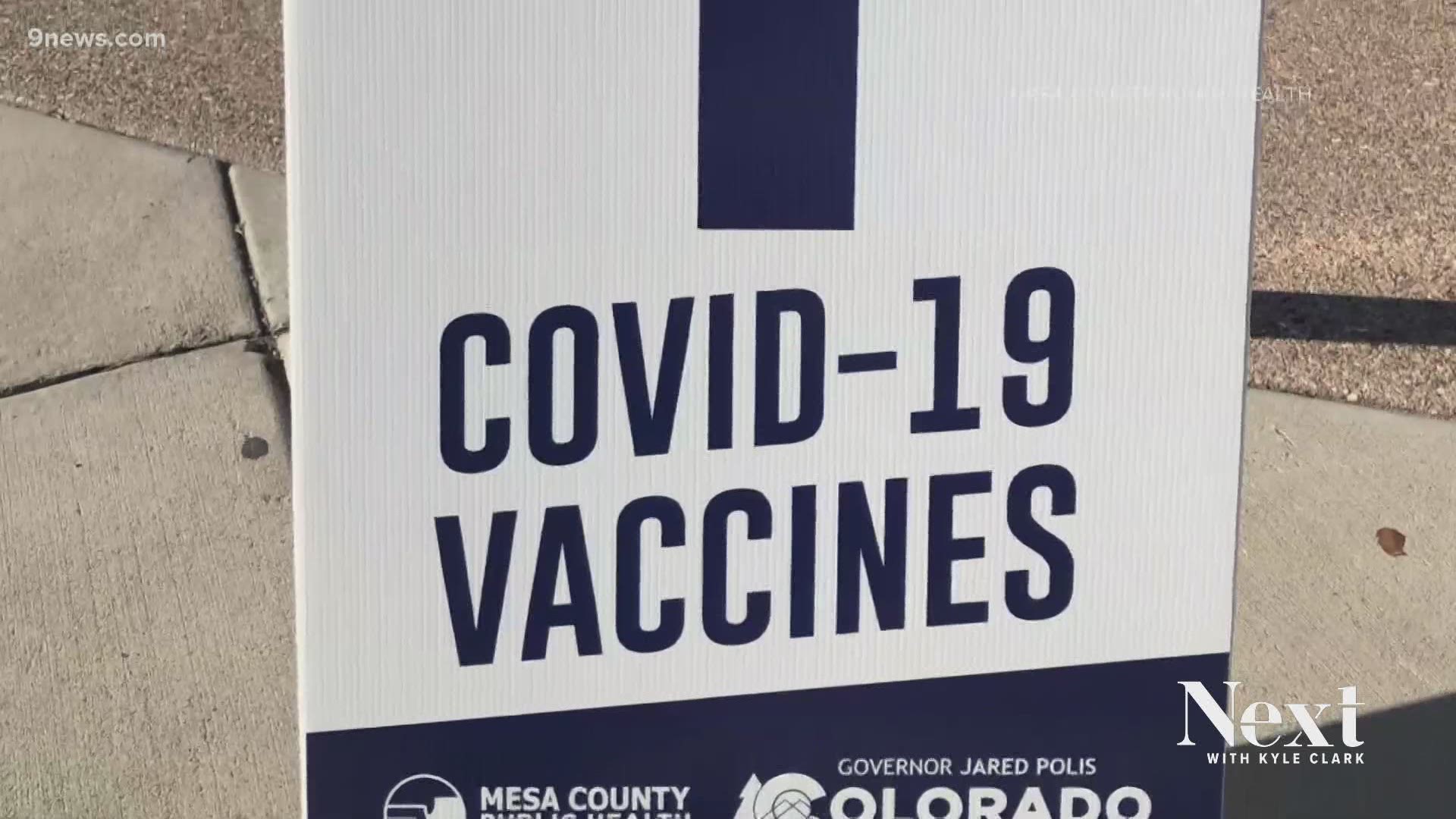 DENVER — As the Colorado Department of Public Health and Environment (CDPHE) prepares to move the state to Phase 1B.4 on Friday, one part of the state had allowed people in the final phase to receive vaccinations.

Friday is when the state moves to Phase 1B.4, which includes vaccinations for an additional two million Coloradans. That list of people includes:

Why is it that Mesa County, on the Western Slope, is already at that stage and beyond?

"We want every single slot filled up each day, so in doing that, we switched between phases," said Mesa County Public Health Executive Director Jeff Kuhr. "We've been in [Phase] 1B.4, and if we've got spots to fill, then we will open it up to Phase 2, most recently."

The Grand Junction Convention Center in Mesa County just became a community vaccination site accessible by anyone in the state.

Five other state-run vaccination sites just opened or are about to open:

The way it's been working in Mesa County, prior to it becoming a state-run site, is that open appointments that hadn't filled days in advance would be given to anyone who wanted a shot at the shot.

"We were filling [Phase] 1B.3 slots with [Phase] 1B.4 people starting last Friday," said Kuhr.

RELATED: Undocumented immigrants hard-hit by the pandemic have few places to go for help. Compañeros in Durango has flipped that around

If appointments were filled, the person would be directed to fill out an "interest form" with their email and phone number. If appointments opened up or were not filling up, the county would reach out to people on the interest list.

"When we need to fill slots, we send them an email," said Kuhr. "For example, for next Monday and Tuesday, if we need help getting those full, we'll send 1,000 people an email with a link to go out and then schedule their vaccine appointment."

The convention center site recently has been administering 1,600 vaccinations each day.

"The entire time it's been an overlap in Mesa County just to make sure that we get those days filled up," said Kuhr.

As a state-run site, it could eventually get to 6,000 vaccinations each day.

RELATED: 'My body was much more fatigued': 2 Coloradans share side effects from COVID-19 vaccine

With Phase 1B.4 starting, there will be approximately 2.5 million Coloradans eligible, so filling spots with anyone from the general public might not be necessary, though the state has already talked to the county about it.

"We do know, however, there are some tighter restrictions when it comes to being a state site, so I don't want to give the impression that we're open to [Phase] 2 because we will have to run now with the levels at which the state is in," said Kuhr.

CDPHE was not happy to learn that Mesa County has been advancing phases.

"If a county wants to expand prioritization because of lack of demand, we are willing to have that conversation because our ultimate goal is to get shots into arms, but that would come after the county has demonstrated a good faith effort to reach currently eligible Coloradans. Right now, only 55% of people 70+ in Mesa County are fully vaccinated," wrote CDPHE. "Phase 1B.4 starts tomorrow and includes frontline workers, people with one or more high-risk conditions, and Coloradans 50 and older, all who are at higher risk whether due to their job, their age or their health conditions. These hardworking and at-risk Coloradans deserve their chance to access the vaccine before we move to Phase 2. We are so close to ending the crisis brought on by this pandemic, and it would be a shame to not act as one state as we vaccinate Coloradans."

"We want to vaccinate as many people as possible, and if it means that we're tapping into another group to make that happen," Kuhr trailed off. "I will mention that we've got efforts that are going on to recruit individuals that are 65 and over."