A study of the health impacts of oil and gas operations in Colorado revealed that risks are below guidelines except in isolated cases.

COLORADO, USA — A new study of the health impacts of oil and gas operations in Colorado revealed that there are short-term negative health risks in extreme conditions.

The study, "The Human Health Risk Assessment for Oil and Gas Operations in Colorado," also found that risks are typically below guidelines, except in isolated cases.

The study is the result of a 2017 recommendation from the Colorado Department of Public Health and Environment (CDPHE) and former Gov. John Hickenlooper's Oil and Gas Task Force.

The 380-page study, released Thursday, is full of technical and scientific language.

It found that headaches and dizziness are possible for people between 300 and 2,000 feet of oil and gas development, during "worst-case" conditions.

"Worst-case" conditions could depend on the type of wind that day and where you're located in comparison to the oil and gas operation.

The study is based on emissions data collected by Colorado State University from 2016 and earlier. The results are based off emissions data from oil and gas operations, weather information, simulated dispersion patterns and chemicals that could be inhaled, and then estimated and calculated into hazards for non-cancer risks and cancer risks.

RELATED: Orphaned well in Broomfield may be source of detected methane

Here's the technical language from the report's summary: "Exposure modeling for most chemicals indicated that acute exposures were below guideline levels for all hypothetical people and facilities. At the 500-foot distance, for a small number of chemicals (including benzene, toluene, and ethyltoluenes), the highest estimated acute exposures exceeded guideline levels at the most-exposed (downwind) locations, in isolated cases by a factor of 10 or more during oil and gas development activities, particularly during flowback activities at smaller well pads."

Basically, that means that based on the data collected, exposure to harmful chemicals was low, except 500 feet away from a small well pad in a specific part of the oil and gas operation in extreme weather conditions.

"This study confirms prior research, as well as our studies out in the field, that there is not an enhanced level of cancer, but that there is a quite infrequent risk of short-term effects, like the dizziness, headaches and nosebleeds. They're quire infrequent, but they're the ones that we take seriously enough that we're going to investigate further," said John Putnam, CDPHE Director of Environmental Programs.

Jeff Robbins, the Colorado Oil and Gas Conservation Commission Director, who oversees permitting of new wells, said he is going to increase the scrutiny he gives new permits beyond the current 1,500 feet from homes.

"You've also heard a lot of terms thrown out there, like 'hypothetical,' 'could be,' 'may happen,' 'worst-case scenario,' all based on modeling. Well, as an industry, what we rely on is actual monitoring," said Colorado Petroleum Council Executive Director Lynn Granger.

The study was based on 5,000 actual emissions samples from prior to 2016. The data was then hypothesized to determine potential health risks in different situations. Picture an analog clock. If the testing one day was happening at 12 o'clock, but the wind was pushing emissions to six o'clock, you wouldn't be getting a complete picture of what's happening at any given time. Since testing can't happen at every point around a well, at every distance, at every second, the data collected is then projected out. It's also based on the health impacts from being near one well pad and not multiple wells.

"Policy needs to be based on real data, actual data, not modeling, not hypotheticals, not theoreticals," said Colorado Oil and Gas Association CEO Dan Haley. "Let's base this on real data instead of models that are theoretical." 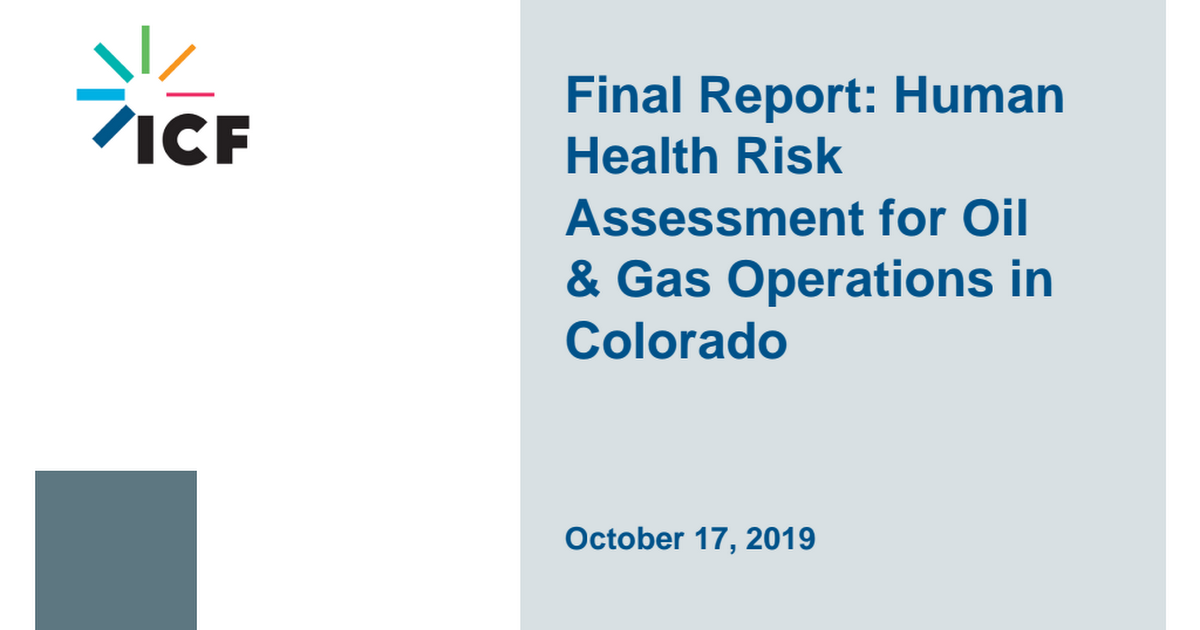 Here are full statements from several organizations about the study:

"This study is the first of its kind because it used actual emissions data to model potential exposure and health risks. It is an important addition to the increasing body of knowledge about the potential health risks associated with oil and gas operations. As we learn more, we have a better roadmap for where we need additional research. However, while we pursue further research, we won’t delay enacting stricter emissions standards for chemicals that cause human health effects, ozone pollution and climate change."

“Working with our partners and CDPHE, we will immediately enact stricter and safer precautionary review measures to protect public health, safety, welfare, the environment and wildlife, which align with our mandate under SB 19-181. Our response is threefold and includes a new plan for permit review, a new plan for testing, and then a plan to use the information from the testing for future regulation and rulemakings. ... SB 19-181 did not tell the COGCC to stop, have a moratorium or ban oil and gas development and nor did it give industry a free pass on permits,” said Robbins. “The COGCC is committed to implementing SB-181, regulating in a protective manner, and will work to ensure that the best data, from CDPHE’s study to the future data-driven studies, can be used to inform these critical decisions that impact all of Colorado."

"The insistence from the state that dangerous exposure to carcinogens from oil and gas is infrequent is concerning. The study looked at exposure from an individual well, not the dozens or hundreds of wells that people are living in close proximity to across the state. The state must look at the cumulative impacts of living near dozens of industrial fracking sites to understand the true impacts of this unprecedented development in our communities.