Next Question: Did you realize there's now an extra $.75 fee on gallons of paint?

Our Next Question is about a fee you may not have realized you've been paying for more than 18 months. 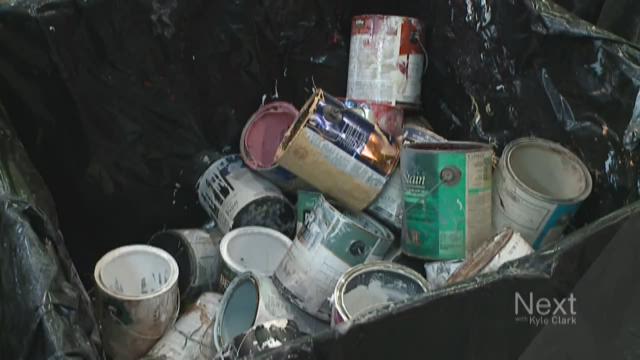 Our Next Question is about a fee you may not have realized you've been paying for more than 18 months.

Jude wrote us the following:

"Did you realize that there is a $.75 fee charged for every gallon of paint sold? The idea is for everyone to be a good paint steward and take their excess paint to a recycle center or drop off that is within 15 miles of their home. Sounds great but has it been effective since its inception in Colorado since 2015? How much money has been charged annually and where is it going? It's true that there are drop off sites within 15 miles of my home, but none of them will take the empty cans and recycle them. Most sites will only take 5 gallons at a time, i.e. 5 one-gallon cans that are partially used. So if you're cleaning out your paint storage area and have more than 5 cans, you'll need to make extra trips or cheat by having your spouse or a friend deposit up to 5 cans. Some places can even charge a "modest" fee for taking the cans of which you've already paid a fee. How many people even realize that they're paying a (PaintCare.org) fee. There is only one location, Green Sheen on Dartmouth in Englewood that will take the paint and empty cans and recycle both. The local recycle company won't take the empty cans. It looks to me like a rip off that was a glorious idea but is really not so great. What's happening to all that money?"

Let's start with the first question. Yes, there is a fee for paint sold in Colorado, but it depends on the size of the container. In 2014, lawmakers passed legislation that required manufacturers of paint to set up and operate a recycling program. The program is managed in Colorado PaintCare, which also administers similar programs in California, Connecticut, Maine, Minnesota, Oregon, Rhode Island, Vermont and Washington, D.C. The fee started on July 1, 2015.

"In the past, before PaintCare, you had to pay to get rid of your paint. Now, the fee is charged when you buy paint and it's free to get rid of at the end of life," said Kevin Lynch, Colorado PaintCare Program Manager.

Jude also wanted to know how much has been charged and where it's going.

"In the first six months, we collected just over $3.5 million in revenue. That money goes straight back into the program," said Lynch.

The program has to file annual reports every March, so the only information we have is the annual report filed last year for July 1 through Dec. 31, 2015.

In those six months, 6.7 million gallons of paint were sold in Colorado, resulting in $3,476,098 in fees. PaintCare had expenses totaling $2,266,974 for operating the program and administrative cost. In those six months, it cost $9.84 to recycle one gallon of paint.

There are 25 metro area locations that will accept your paint for free.

"They do not accept when their bins are full. My job is to make sure that their bins are never full and that they always get picked up on time," said Lynch.

"We actually offer them additional advertising. By putting them on our local drop-off site locator, people can find them," said Lynch.

Because the fee is added to the purchase price of the paint, the state actually taxes you on the fee.

As for Jude's question about not accepting empty paint cans, Lynch has an answer for that as well.

"Our program is a paint recycling program, we're not a can recycling program, that's the way I like to explain it. As long as there's some kind of paint in the can, we take the paint, we recycle it and then we recycle the cans as much as possible," said Lynch. "What we suggest for the empty cans is that you contact your local trash hauler or recycling company in your area."

GreenSheen in Englewood, is one of three locations the recycled paint gets repurposed.

Believe it or not, the paint in each can is separated by color and dumped into a large bin. There could be tens of thousands of different shades of one color in a bin. When there are about 250-275 gallons in the bin, it gets taken a mixer, where it becomes one shade in less than two minutes.

Have a question for us about something? Get our attenton with #HeyNext.