Next Question: Why call the airport 'DIA' instead of 'DEN?'

Why do people, including news people, refer to Denver International Airport as "DIA" instead of its acronym? 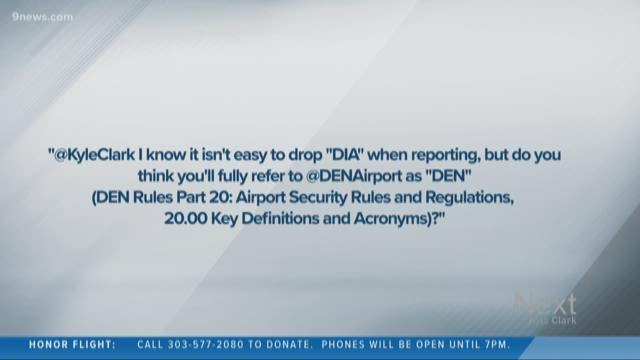 Next Question: Why do people, including news people, refer to Denver International Airport as "DIA" instead of the official "DEN?"

That question comes to Next from Anthony J. Clark, on Twitter.

@KyleClark I know it isn't easy to drop “DIA” when reporting, but do you think you'll fully refer to @DENAirport as “DEN” (DEN Rules Part 20: Airport Security Rules and Regulations, 20.00 Key Definitions and Acronyms)?

The airport has shiny new commercials calling itself by its official call sign DEN, but they're not heavy-handed about what everyone else calls it. Kyle is a conversational kind of guy, so he likes to stick with what most people use.

Kyle explains the reason best, in a way that only he can. So, Anthony, we'd like to refer you to the video above.

Have a question about something around town you'd like Next to answer? Email us at Next@9news.com.