Next Question: Why can't the DMV just understand my middle name is a letter?

One woman says she can't get her ID from the state of Colorado. The problem may be the letter J. 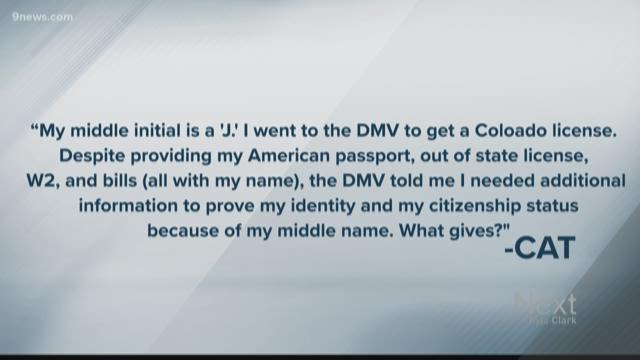 Our Next Question had us asking the DMV for answers. Fortunately we didn't have to visit the DMV to get those answers (or we may still be waiting).

Cat Vielma writes, "My middle initial is a 'J.' I went to the DMV to get a Colorado license. Despite providing my American passport, out of state license, W2, and bills (all with my name), the DMV told me I needed additional information to prove my identity and my citizenship status because of my middle name. They asked me to provide my naturalization papers or birth certificate. They claimed I required 'exception processing.' What gives?"

Today's answer is brought to you by the letter J. It seems that letter is giving Cat Vielma a hard time.

Cat's middle name is J. It doesn't stand for anything. It's just J. She says she chose to legally change her middle name when she became a U.S. citizen. That makes her legal name Catalina J Vielma.

We checked with the Department of Revenue, which runs the DMV. A spokesperson says the DMV must verify someone's full name including a middle name under the REAL ID Act.

The spokesperson says if someone has a letter as their middle name, the DMV needs a birth certificate or other documentation to verify his or her name.

Cat Vielma doesn't have a birth certificate. She says she was born in a third world country and the record is lost.

While her passport is proof of citizenship, many passports don't include middle names.

The Department of Revenue is making her go through another step called exception processing to prove her identity and name. That typically requires additional documentation.

The DOR says this sometimes happens when people go through a name change. The DMV may need a marriage certificate if the person has an out-of-state driver license that has a different name than their birth certificate or passport.

Have a question you'd like Next to find an answer to? Email next@9news.com.