Nearly 4,600 Colorado Republicans changed their party affiliation after the insurrection at the U.S. Capitol

An analysis of Colorado voter registration data showed that most of those Republicans switched to unaffiliated. 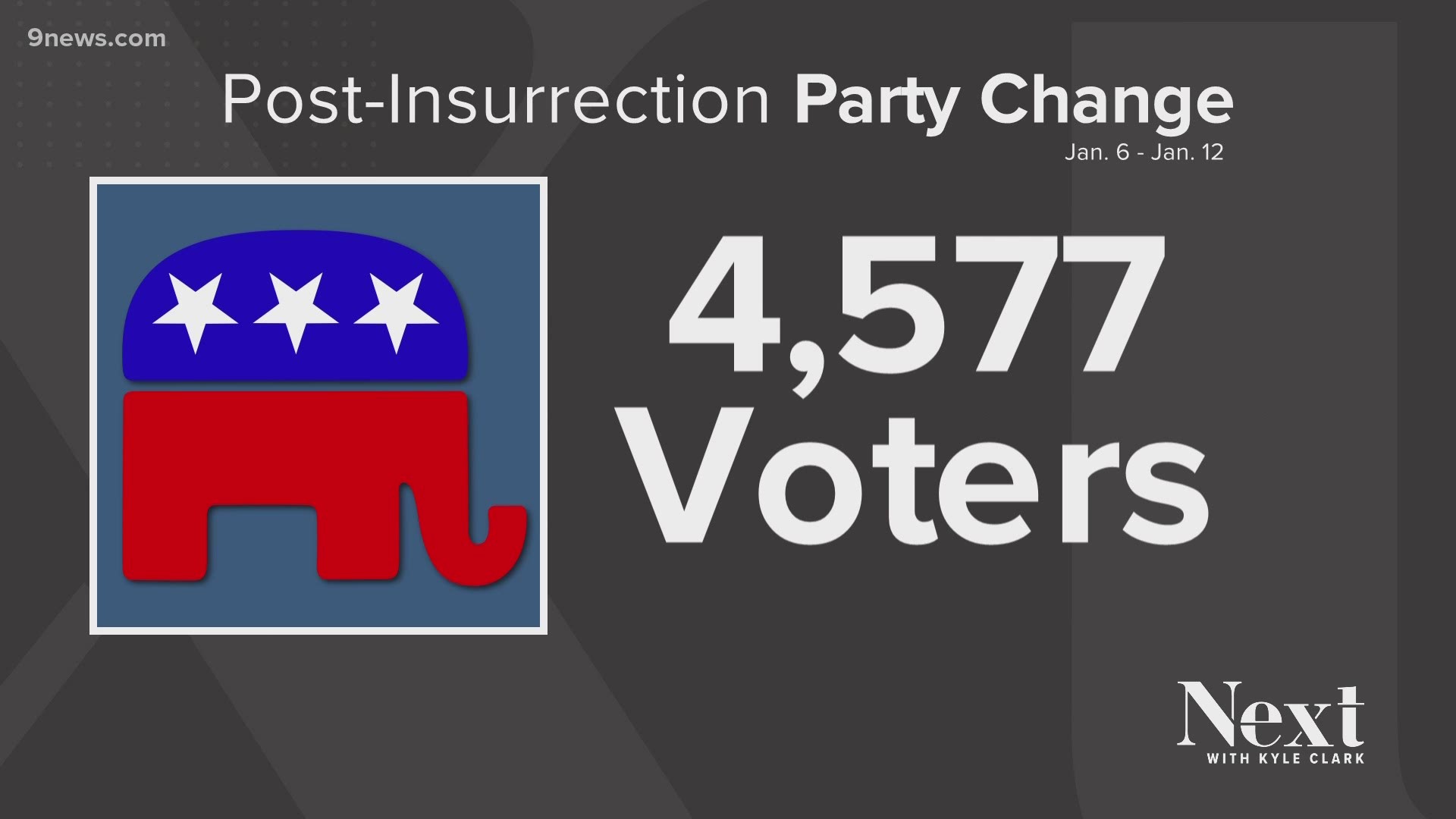 DENVER — Nearly 4,600 registered Republicans changed their party affiliation in Colorado in the week following the insurrection at the U.S. Capitol.

That’s according to a 9NEWS analysis of voter registration data provided by the Colorado Secretary of State’s Office.

Meanwhile, 201 – or 4% -- went from Republican to Democrat. The next most popular choice was Libertarian, but voters also switched to the American Constitution Party, Unity Party, Approval Voting Party and the Green Party.

Next with Kyle Clark requested this data and specifically searched for Colorado Republicans who changed their party affiliation on or after Jan. 6 – the day that supporters of President Donald Trump stormed the U.S. Capitol in a riot that left five people dead.

There were 521 non-Republicans who also switched party affiliation.

At least one Republican voter in 54 of Colorado’s 64 counties changed their affiliation following the attempted coup.

Douglas County had the most, with 759 Republicans making a change.

Arapahoe County had the second-highest number of Republican voter registration changes, with 580, according to the data. In Jefferson County, 519 Republican voters switched parties after Jan. 6.

"I kept holding out hopes that, perhaps, the Republican Party would, in my opinion, come to its senses," said Charlie, a former Jefferson County Republican voter.

He switched to unaffiliated after being a registered Republican in Colorado since July 22, 1980.

"That means in the near term, I will probably have a difficult time ever checking a Republican box," said Charlie. "They have to stop being the party that believes party far above country, that's my perception of the Republican Party on the whole right now." 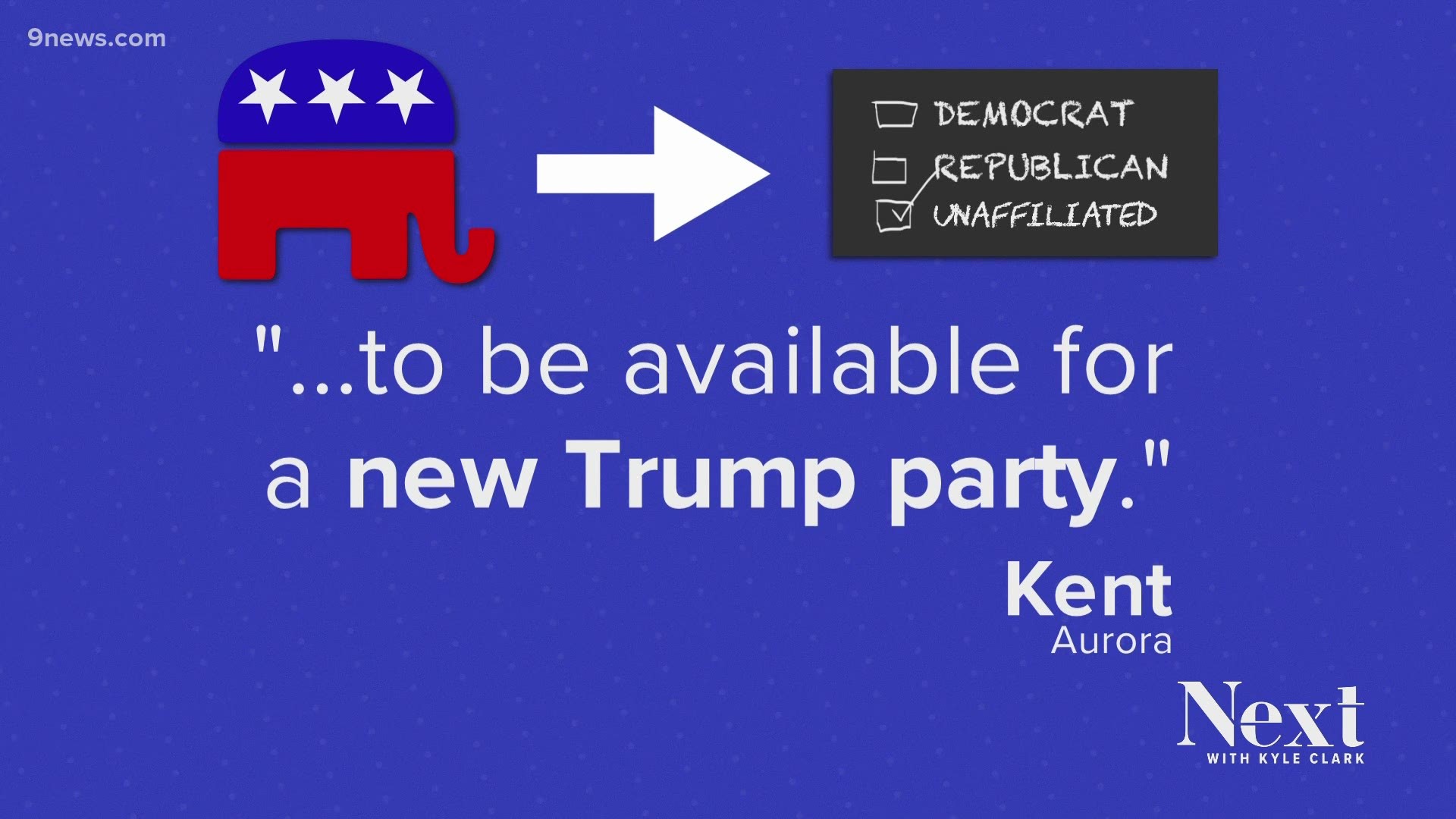 Kent emailed from Aurora and said he switched from Republican to unaffiliated "...to be available for a new Trump party."

A Weld County voter who switched from Republican to Democrat said she is concerned with backlash from her conservative community, but wrote in a text message, "I decided to switch from Republican to Democrat while watching the Capitol riots on TV. My heart was broken watching such a sacred place being overtaken and destroyed by Republicans. As I watched with tears in my eyes, I was embarrassed to be a Republican and turned to my 20-year-old daughter and asked her to change my voter affiliation right then and there. I grew up being a Republican, but as I got older I thought of myself more as an independent, but honestly, these past four years with our former president, I no longer want the word 'Republican' associated with my name at all."

The 10 Colorado counties where no Republican voters changed their affiliation between Jan. 6 and Jan. 12 all skewed rural and conservative.

According to the Associated Press, some Republican voters in states from Iowa to Pennsylvania have changed their party affiliations since this date, but their motivations aren’t necessarily clear.

To put the numbers in Colorado into context, if each of the 4,576 Republicans who switched affiliations after Jan. 6 voted for Trump, they would account for 0.33% of the total number of votes the former president received in the state.

Of the 521 non-Republicans that switched party affiliation, 62 of them joined the Republican Party.

There were 266 Democrats that left the party. Of those, 243 became unaffiliated, while 17 joined the Republicans.

There were 196 unaffiliated voters that joined a party. Of those, 130 joined the Democratic Party and 43 joined the Republican Party.