From QAnon to radical militias: How to talk to a loved one with extremist views

The radicalization of our neighbors extends from everyday Coloradans to elected GOPers. A DU professor working to stop violent extremism has a strategy to help. 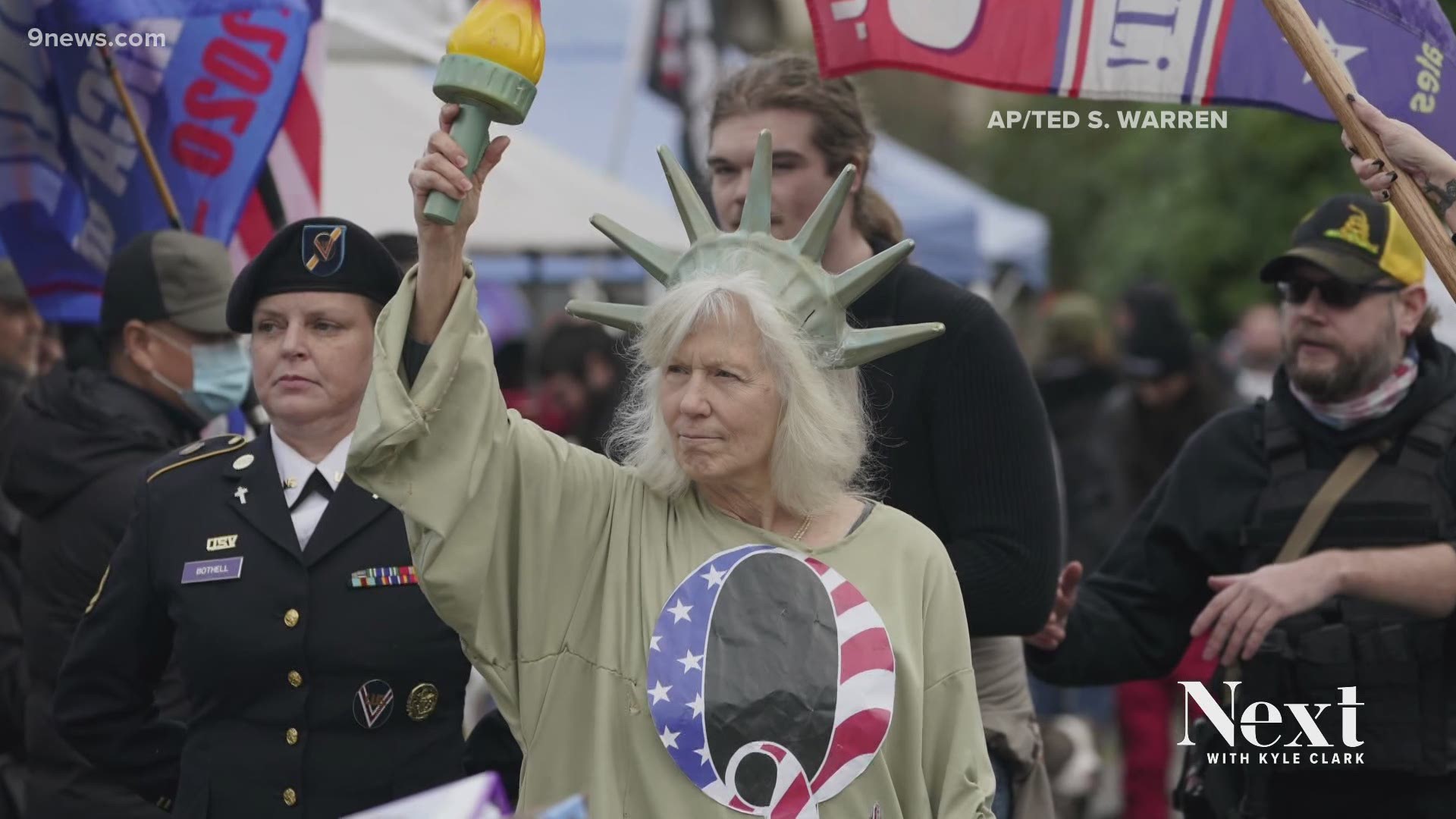 DENVER — As more and more people are arrested for their roles in the insurrection at the U.S. Capitol, we’re learning more about the influences of extremist groups on the events of that day. Among those arrested are believers in the Qanon conspiracy theory and members of extremist militia groups including the Three Percenters and the Oath Keepers.

A common question we’ve received from viewers asks how to engage with friends and family members who have joined these groups and express troubling thoughts. We took those questions to Rachel Nielsen, executive director of the Colorado Resilience Collaborative, a group at the University of Denver (DU) focused on preventing violent extremism through intervention.

How should we engage with people in our lives who have embraced a conspiracy theory or extremist view that we know not to be true?

“Come at it not like you’re crazy for thinking this, but that there’s got to be something at the base of it that you’re really trying to figure out,” Nielsen said. “If you get into this match about who’s right and who’s wrong and who’s information is right and wrong. then you’ll never be able to side with them to the degree that you can influence their thinking.”

Nielsen admits this conversation is going to be anything but comfortable. But she says people too often approach others in an argumentative way, trying to convince them that they are wrong. She says that will never get you anywhere.

“Not getting bogged down in the ideology itself and certainly not arguing that somebody is wrong or that they lack intelligence or they’re not seeing it properly because all you’ll get back is argument,” she said. “Say, you know, I’ve just never heard you say things like this before and I’m curious about what you find appealing about what you’ve been seeing and what you think the issues actually are”

There is no harm in hearing out their points of view, Nielsen said.

“[In] suicide prevention, there used to be this myth that if you talked about suicide and you had the conversation you might actually push someone towards suicide and what we found out is by showing interest and asking questions people make better decisions.”

The same applies here, she says, and it’s important to understand what might be the root of the problem.

What has led to the rise of extremist thoughts and conspiracy theories in the last year?

“The pandemic has been a perfect storm,” Nielsen said. “You have more individuals who are lonely, frustrated, scared about their futures and have a lot of those personal problems.”

“It tends to stem from real economic issues, concerns about immigration, worries about the direction our country is going in, government oversight and overreach -- things we have grappled with throughout U.S. history, but again we can’t have our citizens hurting each other.”

Nielsen said extremism also spawns from human need. Many believers feel a need for identity and a need for belonging, which makes the idea of an extremist group more appealing.

“With the pandemic, a lot of people have more time online and that is their socialization space,” Neilsen said. “So, if you had somebody before that might have been online three hours a day and is now online 12 hours a day and is angry and is having more significant personal problems, they’re more vulnerable to these narratives.”

The pandemic has also created a sense of stress and fear, which Nielsen said can whittle away at people’s ability to sort through misinformation.

Are extremist views a gateway to violent acts like the insurrection at the Capitol?

Not all extreme thinkers turn to violence, Nielsen said. In fact, the vast majority will never act violently. Though, Nielsen said, this doesn’t mean you shouldn’t be cautious about someone speaking about potential violent extremism.

“You never want to believe that this person that you love who’s part of your circle would ever do that, right,” she said.

“In any given violent attack, like an active shooter situation, that there’s on average of three people in that person’s life who have real information about the specifics but they don’t know what to do with it or they didn’t want to take it seriously.”

This doesn’t necessarily mean someone should report their friend or family member to the authorities if they are using inflammatory rhetoric, Nielsen said.

“We can still influence our friends and families. Cops can’t. Law enforcement can’t,” she said.

Nielsen said many members of extremist groups of thought may see violent acts as a sign that it is time to move away from the group.

“You’ll have a lot of people pull away, say that was too much and say, I don’t want to associate with this group anymore. But then you’ll have a number of individuals who are the minority that double-down and become more dangerous.”

Nielsen said isolation breeds these sorts of extremist views and the worst thing you can do for someone in your life impacted by them is to walk away.

“The worst thing you can do to a person is ignore them altogether.”

Rachel Nielsen is the executive director of the Colorado Resilience Collaborative, an initiative that supports those impacted by targeted violence due to radicalism and discrimination. The program offers counseling for people impacted by extremism. To learn more about it, click here.