Radioactive gauge stolen out of vehicle in Denver

"If you were standing by it for 20 hours, that would be the equivalent of a chest X-ray," a Colorado School of Mines professor said of the radiation. 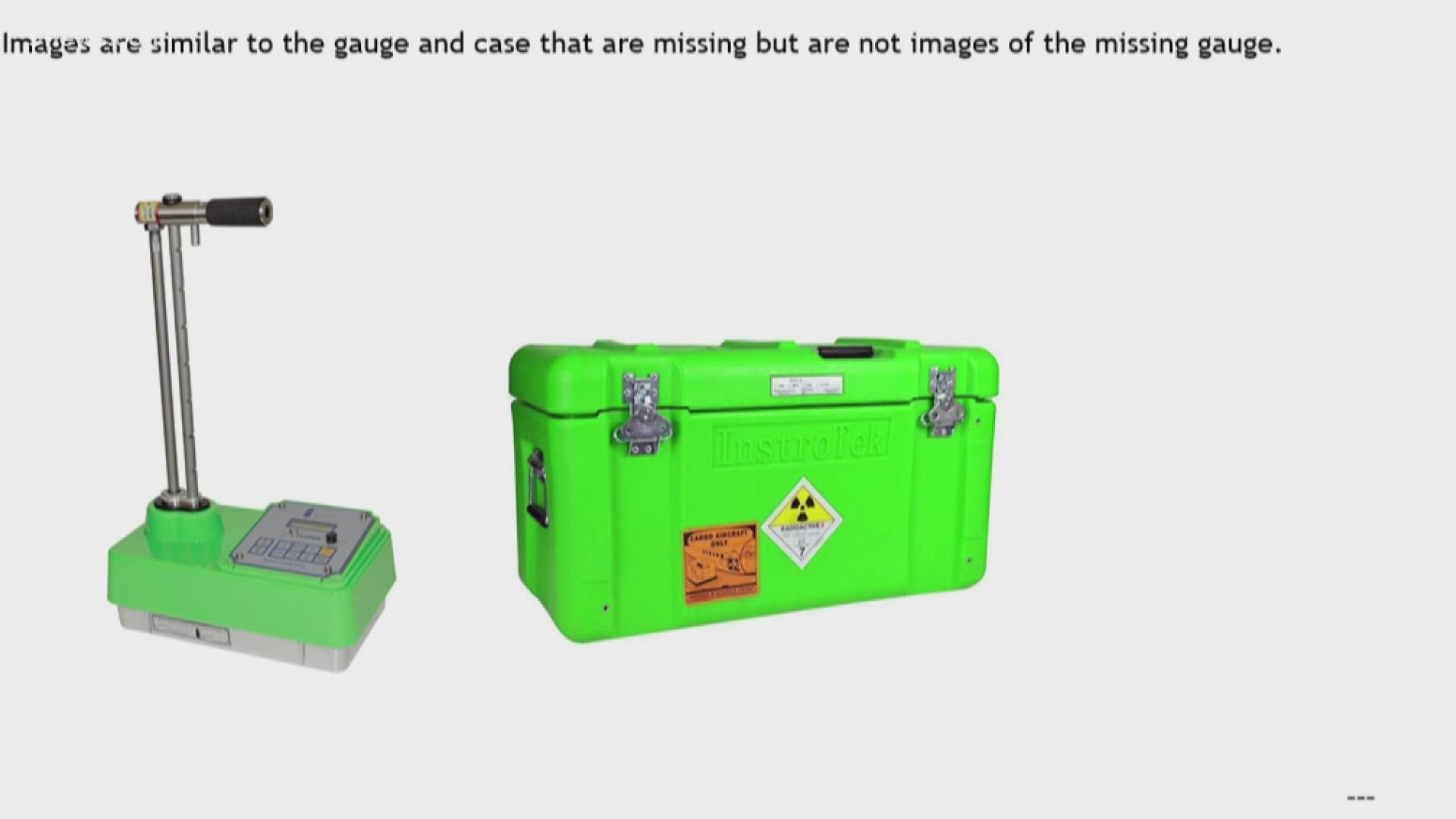 DENVER — Call Marty and Doc Brown, there is missing radioactive material in Denver.

The Colorado Dept. of Public Health and Environment (CDPHE) sent out a news release warning of a stolen radioactive gauge.

"This type of gauge is a portable moisture density gauge. It's used often in road construction to test the moisture content or the compaction density for the paving or repaving operations," said Phill Peterson, Radioactive Materials Unit Leader with CDPHE.

CDPHE is involved because these types of devices need to be licensed by the state.

"This company is required by regulation to notify us when they lose or have radioactive materials stolen," said Peterson.

The company, Geostruct Engineers, Inc., which does business as RMG-Rocky Mountain Group of Colorado Springs, reported the device missing.

It was stolen out of a vehicle near Iliff Avenue and Franklin Street in Denver on Wednesday morning.

A quick search online revealed that this type of device gets stolen often, all over the world.

It's unlikely because of the radioactive materials, but perhaps because it looks pricey since it's locked and in a protective case.

"Quite frankly, the presence of the radioactive material probably makes the resale value a lot less. If you put it up on eBay, someone's going to notice," said Jeffrey King, Director of Nuclear Science and Engineering at the Colorado School of Mines.

Since he's the expert, he helped explain the materials inside the gauge: cesium-137 and americium-241.

"There is americium-241 in pretty much every household in the United States because it's also the isotope that we use in smoke detectors," said King. "And cesium-137 is, often, fairly common as an industrial isotope."

He said the materials would look like small batteries.

"Cesium will probably be some form of salt," said King. "The americium would most likely be a metal or an oxide form."

Based on exposure information provided by CDPHE, King compared the risk to a form of radiation that we might be more familiar with.

"If you were standing by it for 20 hours, that would be the equivalent of a chest X-ray," said King.

Tampering with the case to expose the materials would be quite difficult.

"These sources are double encapsulated and they are built to withstand pretty rigorous and rugged environments," said Peterson. "I have seen one of these gauges run over by a car and the source was not damaged in any way, so I think that it would be a challenge for anyone to actually crack open one of these sources."

The engineering firm is offering a $5,000 reward for information leading to the safe return of the gauge.