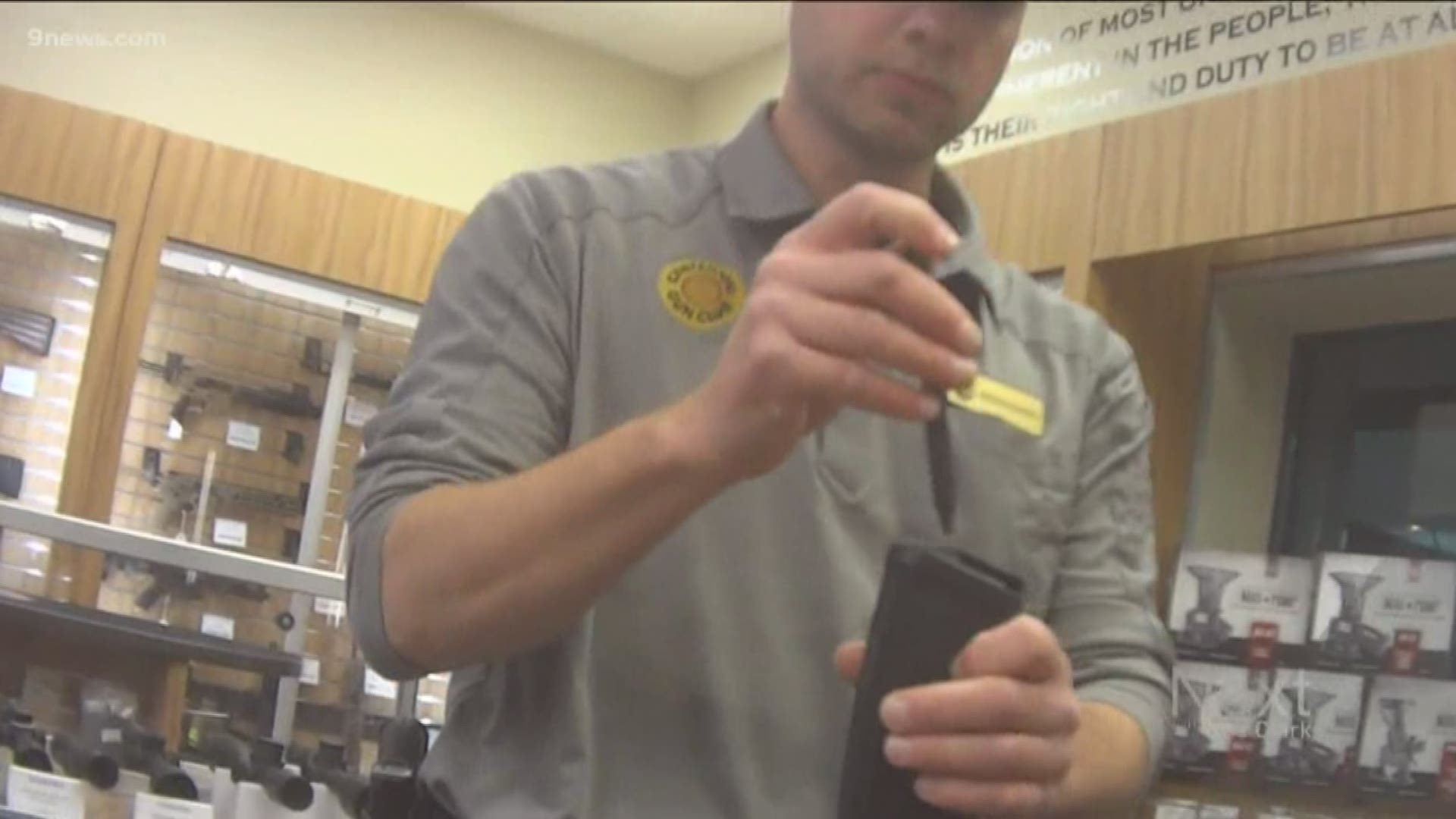 DENVER — Colorado's former governor is touting a law he signed that 9NEWS recently found is not exactly being followed.

He signed the law in 2013 banning the sale, transfer and possession of large-capacity gun magazines, the kind that hold more than 15 rounds of ammunition.

"Everything we sell, as far as mags, are parts kits. This is a 30-round mag, we have to sell it as parts," said an employee at Iron Horse Armory in Douglas County.

"It's a loophole in the wording that they gave that lets us keep selling," said an employee at Centennial Gun Club in Arapahoe County. "As soon as we remove the functionality of it, and take this spring out, it's not a magazine."

Both stores sold disassembled magazines, with the spring taken out of the shell, but with the pieces sold together.

"Based on those videos, man, I'm not convinced that the law doesn't cover that behavior," Brauchler said with a sigh.

Brauchler, a Republican, agreed to watch the video to see what was said by employees as the customers were sold the "kits."

"It's just a plate on the bottom that we're sliding off. We just slide that off the bottom, the spring comes out, you just put the spring back in and slide it on," said the Centennial Gun Club employee.

After reviewing the video, Brauchler said he may have watched an "inchoate crime," the type of crime that involves an attempt, solicitation or act of conspiracy."

"If someone says, 'Listen, we have a large-capacity magazine limitation here in Colorado, but this here fancy kit is a way to beat the system, that makes it much more likely to be one of those other types of crimes, whether it's an attempt or a solicitation or there's a completed act of conspiracy, but I'd like to know how it's packaged, how it's sold and, frankly, I'd like to see the kit as well," said Brauchler.

When the legislature passed the bill in 2013, Brauchler opposed it, while also leading the prosecution in the Aurora Theater shooting case. The Aurora Theater shooting and the Sandy Hook Elementary School shooting were referenced by lawmakers as the reason for pushing the large-capacity magazine ban, since both shooters used magazines that held more than 15 rounds of ammunition.

"I don't think it would have made a single bit of difference in the Aurora Theater shooting, but having said that, the legislature took all those issues up, they passed the law and they put it on the books, so the answer is the law should be enforced until it's proven to be unenforceable, and I don't think we're there yet, or until it's overturned by the Supreme Court or repealed, and we're not there yet either," said Brauchler.

After watching the undercover video, he repeatedly used the same word.

"My guess is, they think what they're doing complies with the law, even if they call it a loophole. I don't know, troubling videos," said Brauchler.

"Right now, with my understanding of the law and having watched that right there, I'm not comfortable with the way that that is going forward, but I would be willing to sit down and have a conversation with the people and see if I can't be made smarter on that, but my reading of the law, I don't know man, I'm troubled," said Brauchler.

Troubled for a Republican who supports gun rights, but also the gun laws passed by the legislature.

"I am conflicted. To me, listening to these people talk, it's clear they don't agree with or like the magazine capacity law. I'm on board with them. I don't like it either. I don't agree with it either. But, what I do agree with is the law and that the law, until a Supreme Court either overturns it or until the legislature changes it, it is the law of the land that we have to abide by," said Brauchler.

Sticking your neck out against gun rights is dangerous territory in Brauchler's judicial district.

"It may be dangerous politically, but I don't think it's dangerous ethically or from a principle standpoint," said Brauchler.

In Douglas County, Republican Douglas County Sheriff Tony Spurlock has become the face of the red flag law that takes effect in January. That law would allow a judge to order the seizure of someone's weapons if they are deemed a threat to themselves or others. Spurlock's stance in a conservative county has led to disagreements with the Douglas County Commissioners and an effort to recall him.

Now that Brauchler has seen and heard the video of what's happened inside two gun stores in his judicial district, what happens next?

"I don't think it's an effective law, but I think it's a law and that's all it requires for me to enforce it, is it has to be a law," said Brauchler. "You heard the guy use the term a couple times, 'loophole.' If that loophole exists, then what they're doing isn't criminal, but I'm not convinced that it exists, at least the way they're describing it. That being the case -- what I don't want to do is go in, forgive the term 'guns a-blazing,' and start to just hook everybody up or scratch out tickets. What I'd like to do is to educate people on how I think the law is written and how I interpret that law and see if we can't come to a common understanding that allows everybody to follow it."