Hickenlooper is vying a U.S. Senate seat. It's a job he said he didn't want and wouldn't be good at after years of executive experience. 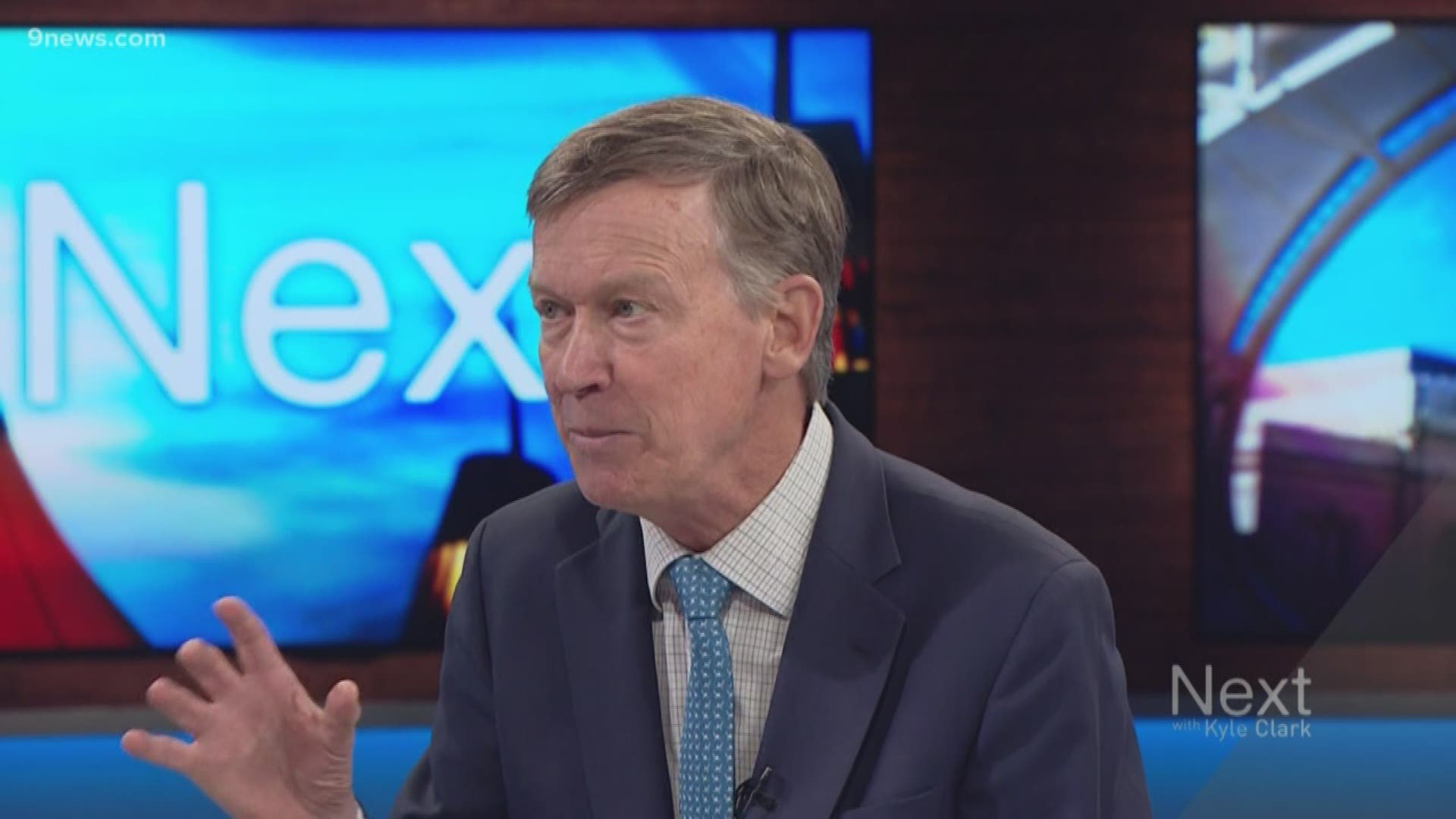 DENVER — Progressive Democrats in Colorado thought they had a real chance to replace Republican Senator Cory Gardner with one of their own.

His entry into the Senate race makes him an overwhelming favorite. even as Democrats nationally and in Colorado move to Hickenlooper's left.

Kyle Clark sat down with Hickenlooper this week. Some highlights from their interview:

Hickenlooper said his failure to launch in the presidential primary wasn't humbling.

KC: You're not used to losing. Was it humbling?

JH: No, I mean, I went into it I think with a realistic perspective. "I think I added value to the debate, to the discussion. I felt that to take on Donald Trump, we needed to have someone with more than just political experience. I have experience in business and as a scientist, a geologist - but also understood how cities worked with states, worked with the federal government, and could talk about those relationships. This was obviously a hard year, though, to get traction if you didn't already have a certain amount of notoriety.

KC: One of your arguments is that you’re best positioned to beat Sen. Gardner because you have won twice statewide in a purple state. What if Colorado isn't purple anymore. What if it's a blue state now, and progressive Democrats don’t have to settle for a centrist candidate anymore?

JH: Well, A, in either case, I need to make my case to the voters of Colorado. And I've got to go out and explain to them reasons why I would be the best person to beat Donald Trump. The highest probability of success, but also how I'm the person to be able to go and change Washington. And really push back against Mitch McConnell and Donald Trump and play a more active role and a more independent role in representing the interests of Colorado.

KC: I think you accidentally juxtaposed the names Cory Gardner and Donald Trump, which is probably a mistake that you don't mind making...

JH: Well, I've been an independent person my entire private life and in my political life.

KC: You haven't been in the Senate, though. I mean the Senate runs a certain way. You would report to Schumer, Schumer would direct the action. How would you be independent?

JH: I have said to anyone who's talked to me at any point that I fully intend to go about this campaign as an independent candidate. I'm a Democrat. I've been a Democrat my whole life, but that doesn't mean you support the party every time. You look at my record as a governor -- you know, once the election's over you want to bring people together and try to get things done, find some common ground you can build on and create progress. I did the same thing when I was mayor. This is probably before your time, but when I first ran for mayor in 2003, the suburbs and the city of Denver hated each other and could never work together. But within a couple of years we were able to find common ground around things like water and transit. We built FasTracks. I mean, we got all 34 mayors to unanimously support FasTracks. That's the most ambitious transit initiative in modern American history...

He struggled to explain how he’d pivot from being an executive with decision-making authority to being part of a caucus in a deliberative body.

JH: I think this is where negotiation comes into play, and this is why I think you have some people that have small business experience in the U.S Senate, in the same way I think you need mayors and former governors in the U.S. Senate. Mayors and governors are the ones who have to implement the policy the Senate makes. And I think that experience has direct relevance to make sure you don't have unintended consequences when you put in place news policies. In the case of Medicare for All, I believe that allowing people the opportunity to buy into some form of Medicare, if they can't get insurance on the private exchanges or they have pre-existing conditions that make that insurance too expensive, that there ought to be a way that they can buy into some sort of Medicare...

KC: I understand that, but the question wasn't what John Hickenlooper the leader, the executive would do, but what would happen when you enter a very different governing scenario, in which you might not get to pick the solution...?

JH: My answer to you was that's when you have to negotiate, and what I said was that you need that experience as a small person business person, and also as someone who's had to implement the policy like a mayor and a governor to make sure you don't have unintended consequences. So that negotiation gets you to a place, you're probably not going to be in either camp...

Hickenlooper indicated Democrats need to stop fighting amongst themselves on climate change (i.e. stop picking on me for being a pro-oil and gas Democrat) when Republicans are doing absolutely nothing about it.

JH: Well, A, whatever backing I had from oil and gas was always somewhat limited. Let me just say there was a great deal of mistrust. all the way from when I first got into public life, even when I was still a mayor. I would hold, what we've done in Colorado in terms of climate change against any other governor or even any other mayor when I was mayor of Denver. We got methane regulations done. We were the only state to be able to actually negotiate and find that common ground, so that the environmental nonprofits... and the oil and gas industry... figured out what is an effective, efficient way to cut methane...

The bigger point to focus on is President Trump, and Mitch McConnel and Cory Gardner, goes along with them, are not only doing nothing to address climate change, which is probably the gravest threat that humanity's ever faced if we're going to be realistic about it and look at some of the unintended consequences that are looming on the horizon -- Cory Gardner's done nothing to push back against McConnell or President Trump. We have a very limited window in which we can act...

>> In the full interview, they discuss gun policy, whether Hickenlooper would hire someone who said they didn't want the job, compromising with Mitch McConnell, and rumors that big-time Democrats are blackballing strategists who work with his fellow challengers.

You can see the full interview, as well as Kyle's sitdowns with other Democratic Senate challengers and his sidewalk exchange with Gardner here.