Some college students want ink! Coffee to stay away after one shop posted a sign saying, "Happily gentrifying the neighborhood since 2014." 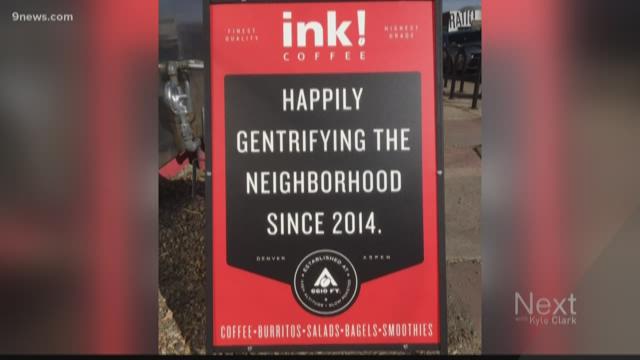 A group of students says plans to bring an ink! Coffee branch to CU Denver’s new wellness center on the Auraria Campus is a slap in the face, considering history.

The Auraria campus was created in the 1960s, when residents of the Westside Auraria neighborhood were displaced to make way for the campus. It’s essentially one of the earliest examples of gentrification in Denver.

Descendants of those displaced by the campus can get a full ride scholarship to any of the schools on the campus.

“Our campus only even exists because of gentrification,” said Christina Hughes, one of the students leading the effort against ink! Coffee.

ink!, if you don’t remember, got into trouble last year after a marketing campaign gone wrong. The chain put a sign in front of its Five Points location saying, “Happily gentrifying the neighborhood since 2014.”

It led to weeks of protests and a summit on the problem of gentrification.

The owner later apologized, calling the campaign a joke. He said he is working to become better educated about the issue of gentrification.

CU Denver decided to build an ink! chain in it’s new Wellness center two years ago, long before that controversy.

“We now have an obligation as an institution with this additional information...to reconsider that position of doing business with them,” Hughes said.

CU Denver wouldn’t give 9NEWS an interview on the issue, rather issuing this statement:

“CU Denver Student Affairs leadership met this past Friday with several students who are petitioning against the ink! Coffee location scheduled to open in the new Student Wellness Center.

Two years ago, CU Denver student government representatives, staff and other members of our campus community selected ink! Coffee as a vendor for the new Student Wellness Center. Soon after the company posted its controversial signage at its Five Points location, CU Denver leadership met with Ink! owners to discuss the relationship going forward. At that time, ink! owners acknowledged their mistake, expressed remorse and conveyed a commitment to increasing cultural awareness within their company and their responsibility to the community going forward.

CU Denver leadership will continue to meet with student government leaders as well as those students who raised concerns last week.”

9NEWS reached out to ink! today. The owner pointed us toward his original statement on the sign.