Four men, including one from Aurora, thought federal testing would clear them in a drug trafficking case. But the charges still stand, even after lab testing, because the results hover around the legal limit that determines hemp vs. pot.

DENVER — The results from federal lab tests, which lawyers hoped would help clear up the hemp versus pot confusion in Oklahoma, have kept their clients in a gray area.

Charges were filed against four men, including Andrew Ross from Aurora, last month when police in Pawhuska, Okla. said they were illegally hauling marijuana across the country. While the men insisted it was legal industrial hemp, everyone had to wait on results from a lab test to prove the case one way or another.

A Drug Enforcement Agency lab in Dulles, Va. tested various samples of the 20,000 pounds of product. For the substance to be considered hemp by federal legal standards, the product must contain 0.3 percent or less THC, the element in marijuana that makes users high. According to paperwork from the lab, the majority of the 11 tested samples were within range of the legal limit, if the margin of error is considered.

Three of the samples tested too high in THC, even factoring in the margin of error. But each sample still contained less than 1 percent of THC, lab paperwork shows. The highest sample was positive for 0.5 percent THC, with a .1 percent margin of error. 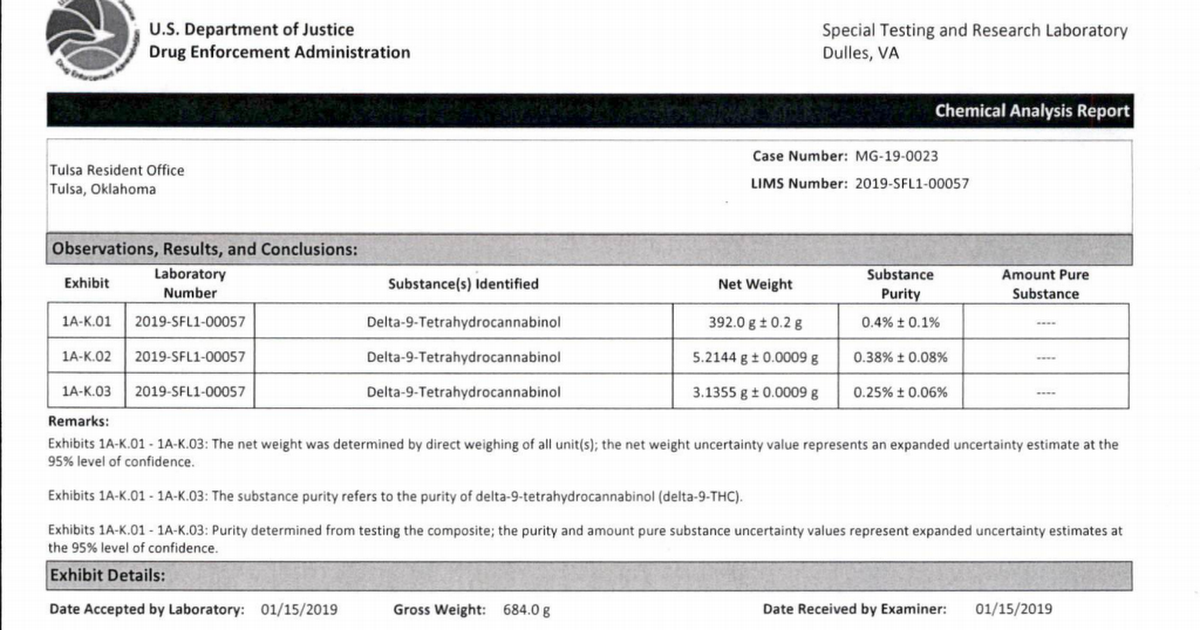 Attorney Matt Lyons, who represents Andrews, shared the results he said he received from the district attorney's office in Osage County, Okla. The results were delayed because of the recent partial shutdown of the federal government.

The 2018 Farm Bill, signed by the president in December, legalized hemp under federal law and allowed for its shipment. Ross was working as a security guard for the truck carrying the substance when police pulled over him and his fellow security guard, David Dirksen, along with the drivers of the truck, Tadesse Deneke and Farah Warsame. Police said the truck and security vehicle ran a red light when officers stopped them on Jan. 9.

Over the phone Tuesday, Lyons said he was hoping the results would have effectively ended the case, but he was told by the DA’s office there will now be another round of testing. Lyons said there could be different levels of THC depending on what parts of the plant were tested and how they were tested.

Each of the four suspects faces the possibility of life in prison for drug trafficking. Ross and Dirksen left jail after about a week on bail. Deneke and Warsame remain in jail.

Michelle Keely, the first assistant for the district attorney's office, told Next with Kyle Clark that the charges for aggravated drug trafficking still stand.

Deneke and Warsame are being represented by attorney Trevor Reynolds and his firm. Reynolds believes the federal lab tests will help exonerate his clients because of the low THC percentages.

“When you look at commercial grade marijuana, you are talking THC content of ten percent and above,” said Reynolds. "If it’s marijuana, it's the worst marijuana known to man."

Reynolds said his firm helped one of his clients sell his car, so he could pay his rent in Alabama while still in jail. He said both men are upset about being in jail for close to a month now.

"They want to know why they can be held over a load they had no control of," said Reynolds via Skype. "All they did was get dispatched to pick it up, and why they are facing charges that can carry 15 to life in Oklahoma?"

Reynolds said that under the Farm Bill, if hemp is found to be over the 0.3 percent THC limit but still under 1 percent, there could be fines for violators, and the hemp would have to be destroyed.

When Next asked the district attorney's office why they're pursuing criminal charges instead of a fine, Keely wrote in an e-mail:

The confiscated hemp was headed to a Louisville, Colo. company called Panacea Life Sciences, which said it was expecting around a half a million dollars worth of hemp. The company said the hemp was properly tested before leaving a certified farm in Kentucky, and their results showed the product was hemp.

RELATED: One federal law regarding hemp; Up to 50 different variations of the rules

RELATED: There's a new law about hemp, and a man accused of drug trafficking thinks more people need to know about it