As many as 35,000 Coloradans belonged to the organization during its peak in the late 20s, according to Bob Goldberg, a professor at the University of Utah. 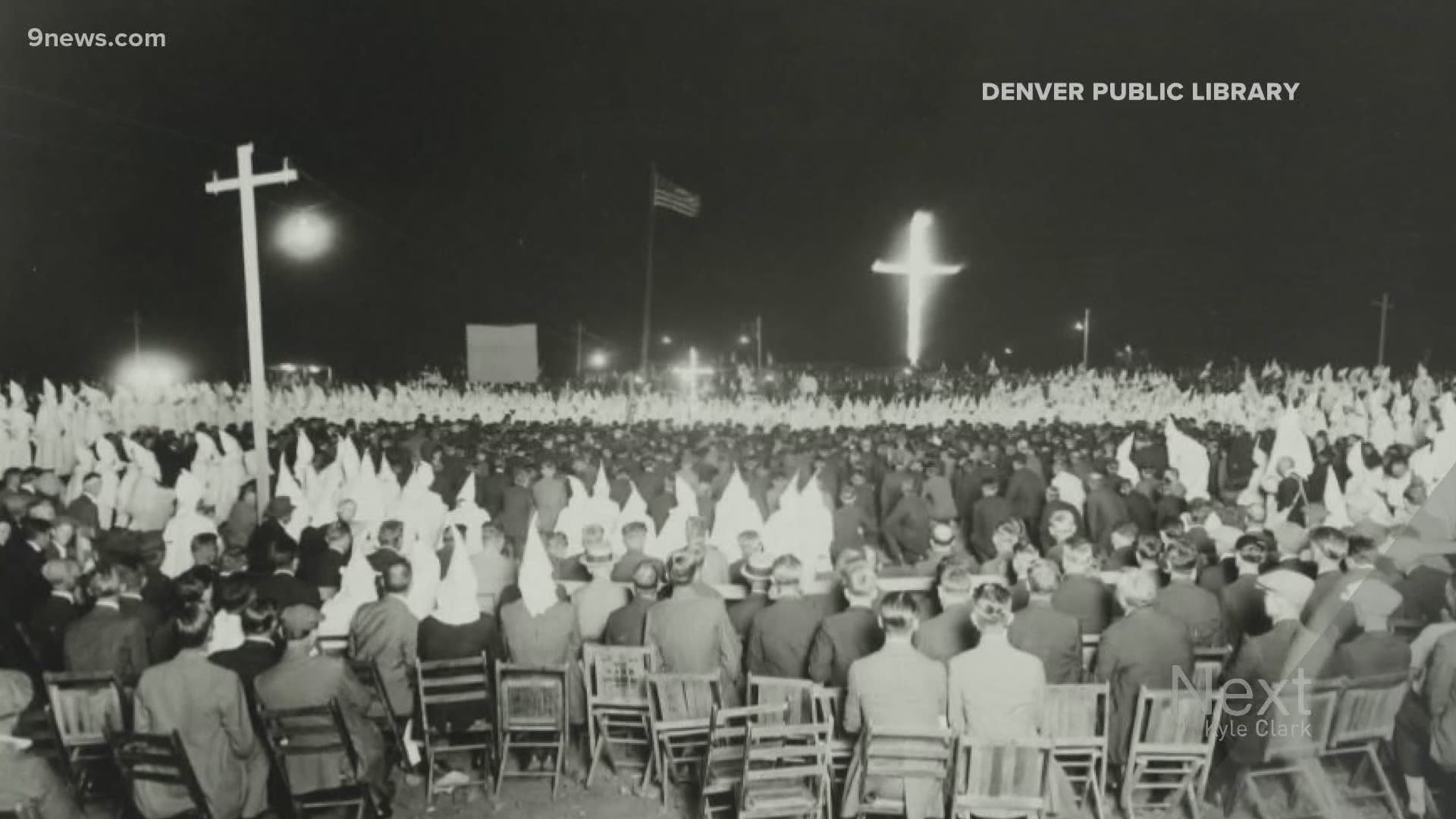 DENVER — The decision by a Denver neighborhood to strip the name of a former Denver mayor tied to the Ku Klux Klan is a reminder of the power the KKK had in Colorado for a short period less than a century ago.

Mayor Benjamin Stapleton, a member of the Klan, was elected largely because of the influence of that organization in the early 1920s.

“They were operating more or less openly and they weren’t quite the lynching, night riding Klan we think of, but they were every bit as hateful,” Trembath said.

Trembath said the organization wasn’t in the shadows then as it is today.

“Some people might have viewed it as a social club,” he said.

As many as 35,000 Coloradans belonged to the organization during its peak in the late 20s, according to Bob Goldberg, a researcher and history professor at the University of Utah, who wrote a book called “Hooded Empire: The Ku Klux Klan in Colorado.”

“In my mind, the Colorado Klan was the second most powerful Klavern or organization in the United States in the 1920s after Indiana,” Goldberg said.

Goldberg said this movement of the KKK was the second movement in the group’s history. The first focused predominantly on the persecution of black Americans following the Civil War. The third, after World War II, had a similar target.

“It was anti-African American,” he said. “It was for white supremacy.”

“But its larger proponent, its larger issues were in regards to Catholics, Jews, immigrants and the issue of law and order and based on that cafeteria of appeals, the Klan was able to attract many people.”

He describes a Klan that was an economic and political machine, working to uphold Protestant white values to an extreme.

“So they were very anti-Catholic, very anti-immigrant,” researcher Trembath said. “They would try to push bills through the state legislature to ban sacramental wine.”

“[The movement] was able to elect the governor, lieutenant governor nearly all the statewide officers in 1924, two United States senators one of them was a member of the Klan and then the Klan had power locally in towns and cities throughout Colorado,” Goldberg said.

PREVIOUS: The history of 'Stapleton,' a neighborhood named for former Denver mayor and KKK member

It asserted that political power by directing members how to vote, regardless of party, according to Goldberg.

“The Klan would vote in bloc for a candidate,” Goldberg said. “As John Galen Locke, the grand dragon of the Colorado Klan said ‘we are not Republicans, we are not Democrats, we are Klansmen’. And you were expected to vote the Klan ticket from the top to the bottom.”

And the Klan tried to control the economy, driving businesses toward white Protestant business owners and away from Jewish and Catholic business owners.

“The Klan made sure you were able to put a sticker on the front of your store a sticker that had the letters K.I.G.Y., it stood for “Klansmen, I greet you” and that’s how you knew you were on the favored Klan list,” Goldberg said.

As for why Colorado drew such a Klan stronghold, Goldberg says it has a lot to do with a diverse number of issues in the 1920s and the fact that Locke, the grand dragon at the time, was a charismatic leader.

He also said the Klan was drawn to Denver because it was awash with crime from prostitution to bootlegging during prohibition. The Klan promised ‘law and order,’ which eventually became its downfall.

After Klan leaders got caught up in political scandals, accused of breaking laws, the hate group’s power began to fade near the end of the 20s.

Though Goldberg believes some of the hate from that era reverberates today.