A crowded field of Democrats piled on to the debate stage in Miami Wednesday for the first night of two presidential debates. 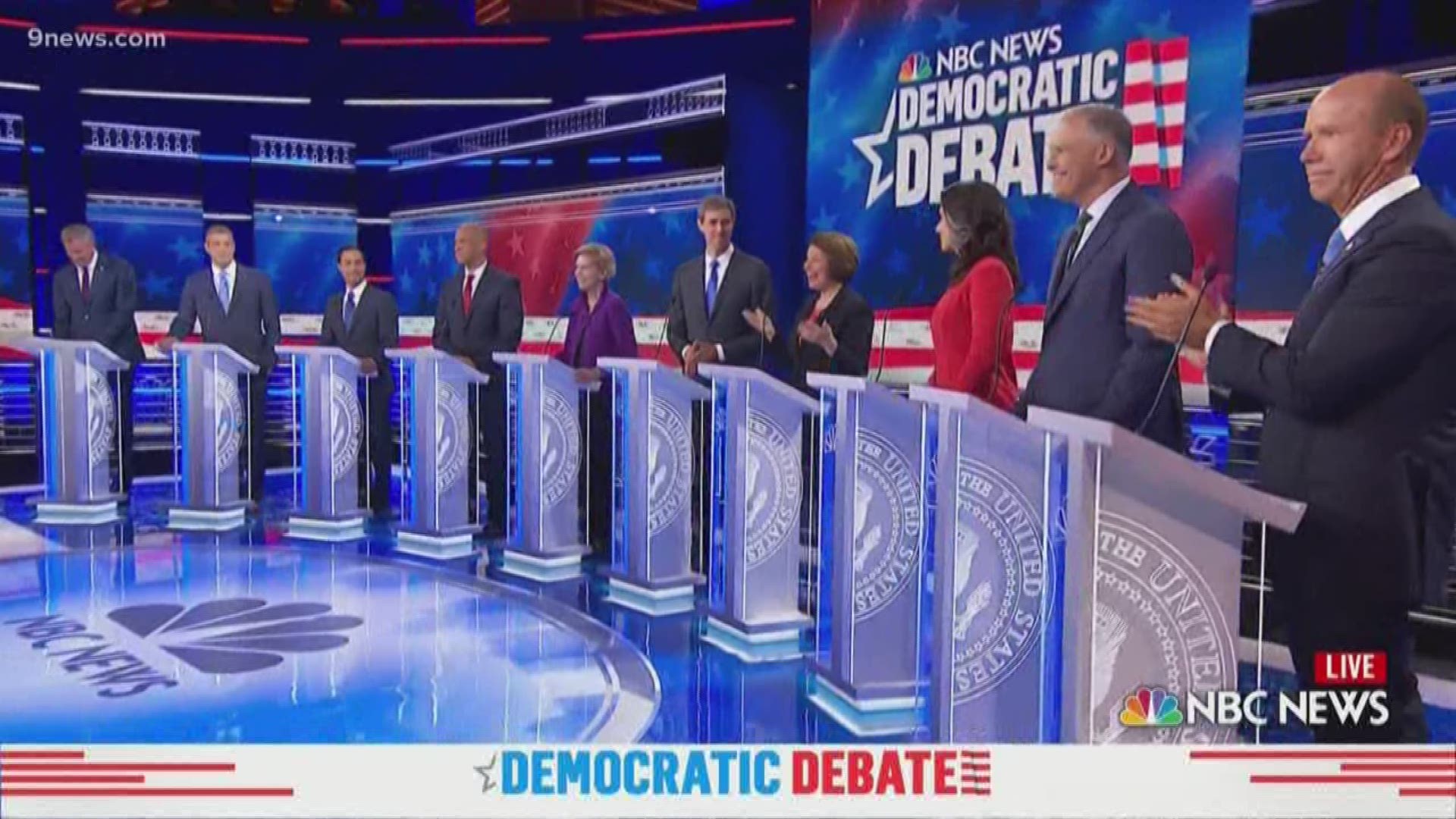 MIAMI — We came all the way to Miami to cover the NBC News Democratic Debate and watched it no differently than if we stayed in Denver.

The media is not allowed inside the debate hall during the event. We were given 30 minutes to check it out Wednesday morning. Instead, a "spin room" is set up in the opera house across from the performing arts center that was transformed into a debate space for 20 candidates over two days.

The second night of the NBC News Democratic Debate will have 10 candidates, just like the first night, but 20 percent of the candidates will be from Colorado.

RELATED: Democrats, including Hickenlooper and Bennet, in Miami for first debates: What you need to know

"It’ll be interesting to see how the moderators manage it, be able to see how strict they are on time limits," Bennet told 9NEWS after he arrived in Miami on Wednesday afternoon.

He said he doubted there would be anything he could see on Wednesday night that would alter what he's practiced.

"If you discover that every question was a 'yes-no' answer or that they asked for hands to be raised or whatever, you would adjust for that," said Bennet.

Hickenlooper hasn't been in a candidate debate since 2014 when he debated Republican gubernatorial candidate Bob Beauprez on his way to winning reelection as governor.

"I look back at who I was in 2014 and it seems very, very distant. This is like getting a Ph.D. in America in a year," Hickenlooper told 9NEWS before he arrived in Miami. "Not only is my command of policy dramatically increased but how I talk about policy. I used to just talk about ideas and it didn't matter how many words I used (or) how long I took."

He said the idea of debating nine other candidates with millions of people watching did not make him nervous.

"They're humans. They're people. And the bottom line is that 20 normal, everyday human beings are all competing to be something that's bigger than anything a person can be, to be President of the United States," said Hickenlooper. "I'm not in any way nervous or anxious. At least, I don't feel that way now. Maybe when all the bright lights are on, I don't know."

"I think there are a lot of people in America that I haven’t had the chance to meet, who haven’t met me, and I hope to have a favorable impression. I hope they’ll see me as somebody who is willing to tell the truth even when it’s inconvenient," said Bennet.

He last got nationwide attention when he shouted at Sen. Ted Cruz (R-Texas) on the Senate floor earlier this year, in an argument that became C-SPAN's most-watched Senate floor video in less than eight hours.

"I didn’t bring Ted Cruz with me, so I don’t think I’ll have a 'Ted Cruz moment' tomorrow. And I think it is unrealistic for anybody to expect that," said Bennet.

"The real focus for me is to be who I am and to be concise and to speak out that socialism is not the solution," said Hickenlooper.