Union Pacific is selling some land called Barnum Yard, and the Colorado Department of Transportation wants to buy it. The purchase could mean changes to I-25. 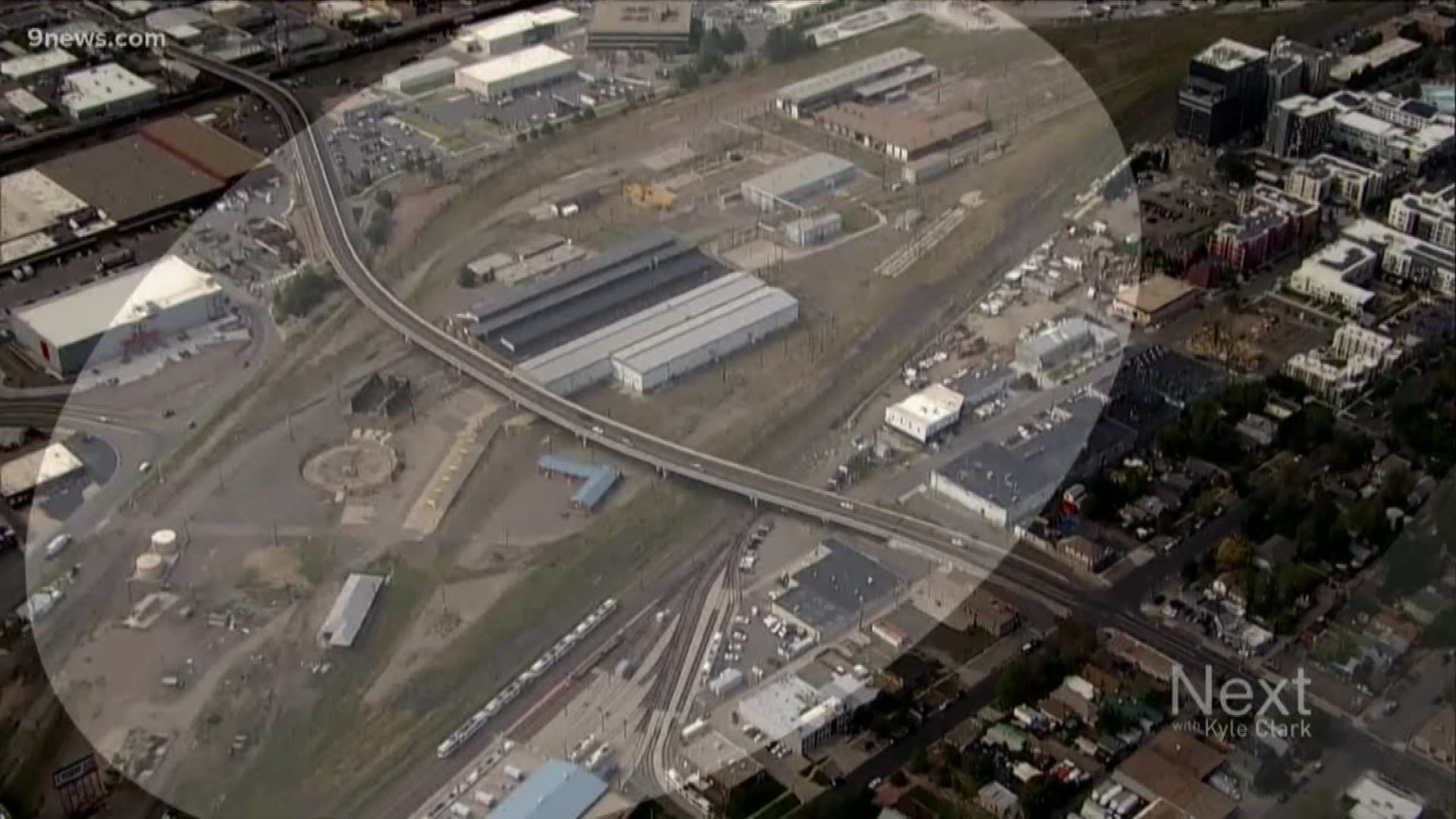 DENVER — If I told you to imagine the traffic on Interstate 25 between Santa Fe and downtown Denver, do you think about weekday rush hour or Saturday at 11 a.m.?

Is there even a difference?

That stretch of I-25, known to the Colorado Department of Transporation as "Central 25," is the next span of a major highway to soon be improved. Perhaps.

CDOT's looking at five different options - one of which is leaving it as it is - that could change I-25 and help reduce congestion, but making those adjustments would also mean changes to the land around it.

WHAT IS BURNHAM YARD?

CDOT wants to buy Burnham Yard to help facilitate improving that part of I-25.

If you're one of the 250,000 daily drivers between Santa Fe and 20th Street, you drive by Burnham Yard constantly.

It sits east of I-25 between 4th and 13th avenues and is currently for sale.

Union Pacific owns the 61 acres and if CDOT buys the land, it could help expand I-25, add light rail capacity for RTD and possibly provide a high-speed rail line for a future train from Fort Collins to Pueblo.

And what does that have to do with I-25? Since the interstate is pinched between the Platte River on the West and the existing rail lines on the East, it provides space.

CDOT thinks Union Pacific may sell the property by early 2020, according to spokesperson Matt Inzeo, but plenty of factors are still at play when it comes to a potential sale, including environmental studies, funding and public support.

WHAT ARE THE FIVE OPTIONS?

CDOT is proposing five different ideas to fix Central I-25.

Option 1: Doesn't really do much. It shifts the rail lines slightly to the east and allows the proper shoulder width on I-25 (approximate cost: $163 million).

Option 2: Doesn't utilize Burnham Yard and moves southbound I-25 to the west of the Platte River from Sixth Avenue to Alameda Avenue (approximate cost: unknown, but more than $400 million).

Option 3: Constructs a double-decker highway with southbound I-25 being built directly over the current highway which would become only northbound I-25 (approximate cost: $694 million).

Option 4: Moves I-25 to the east of the current railroad. The highway would run through Burnham Yard, parallel to the RTD light rail tracks. This option would give RTD the opportunity to add two additional light rail tracks (approximate cost: unknown, but more than $500 million).

Option 5: Shift the railroad to the east through Burnham Yard. Moving the rail line to east would give CDOT the flexibility to expand I-25 from where it sits know to where the rail currently sits. This option would allow RTD to add two additional light rail tracks and the possibility of a future high-speed rail track (approximate cost: $426 million). CDOT has revealed that this option is preferred.

Watch the video above for a visual explainer.

"The cost doesn't necessarily drive which option you come up with. We know that from Central 70, there [were] least costly options that we did not choose because they weren't least impactful," said CDOT Chief Engineer Josh Laipply.

RELATED: Full weekend closure of I-70 at I-270 begins Friday

"The preferred option is always the least impactful and most [beneficial] to the public," Laipply said. "Any option that we do is going to have some kind of impact, whether it's taking somebody's land through a right-of-way acquisition, which that's never fun, that's never something that we want to do, or trying to stack a highway on top of itself, which that has impacts and costs that are real as well."

Moving the highway west of the Platte River or east of the current railroad would encroach on current businesses.

"Mostly an industrial area. Yeah, they're businesses. Those have big impacts, not only to the business owners and the local people but also the tax base, as well," said Laipply.

The idea of shifting the current railroad could also have impacts on Alameda Avenue and Kalamath Street, where the rail crosses at grade level and forces drivers to wait multiple times a day.

"Maybe you're on Alameda or you're on Kalamath, and you're sitting there waiting for a train to go by, wouldn't it be great to make those grades separated?" said Laipply.

Depending on the option that CDOT ultimately decides for Central I-25, an additional toll lane could be added. Though, CDOT prefers the term "managed lane."

"We want to provide a lane that gets you to where you're going in a reasonable amount of time, that you can predict. Because you can't do that now on I-25," said Laipply.

It's possible a toll lane could start around Santa Fe and connect north to the current toll lanes through downtown to 120th Avenue, and vice versa.

"Ideally, someday, you'd have a managed lane that you could get from Colorado Springs to Fort Collins," said Laipply.

But don't take that to mean there will be a free lane converted to a toll lane to create that network, especially through the Denver Tech Center and north to Broadway.

"We're never going to take away something the public had and charge you for it," said Laipply. "You pay one way or the other. You pay with money to get in a managed lane to get there when you expect to get there, or you pay with your time in the other lanes."

Laipply pointed out CDOT is more than just widening highways. The idea to purchase Burnham Yard could lead to other means of transportation.

"The interstate can't take everybody that's coming here, we've already seen that happen. And so, we're trying to look at more and more options to create that multi-modal decision point," said Laipply. "A lot of people say, 'Oh, you're just about widening roads,' but that's not true. We run a bus service, and this is an extension. Transit-oriented development is the way that we're going to have to go and more transit ridership is where we have to go to get people through this city because there are so many people coming."

"What we're laying out is the right-of-way for that to happen, whether those rail lines get installed or not is up to RTD," said Laipply. "If we're mindful, as we go through projects like this, to preserve some right-of-way that they could do that, it kind of takes bites at that elephant that seems like it's too big to tackle, to try to get some progress on multi-modal options."

Next with Kyle Clark reached out to RTD's involvement in CDOT trying to purchase Burnham Yard.

"We have long had plans to purchase the Burnham Yard to add capacity to our light rail system. Several light rail lines pass through the 10th and Osage Station area. We want to increase capacity in the future to three or four tracks, if possible. We have funding to buy the property and will then look to expand in the future. A key area for us," said RTD spokeswoman Pauletta Tonilas.