The history of 'Stapleton,' a neighborhood named for former Denver mayor and KKK member

Colorado is not exempt from the renewed attention on white supremacy groups.
You may not realize that a popular neighborhood is named after Denver politician, who also was a member of the Ku Klux Klan. 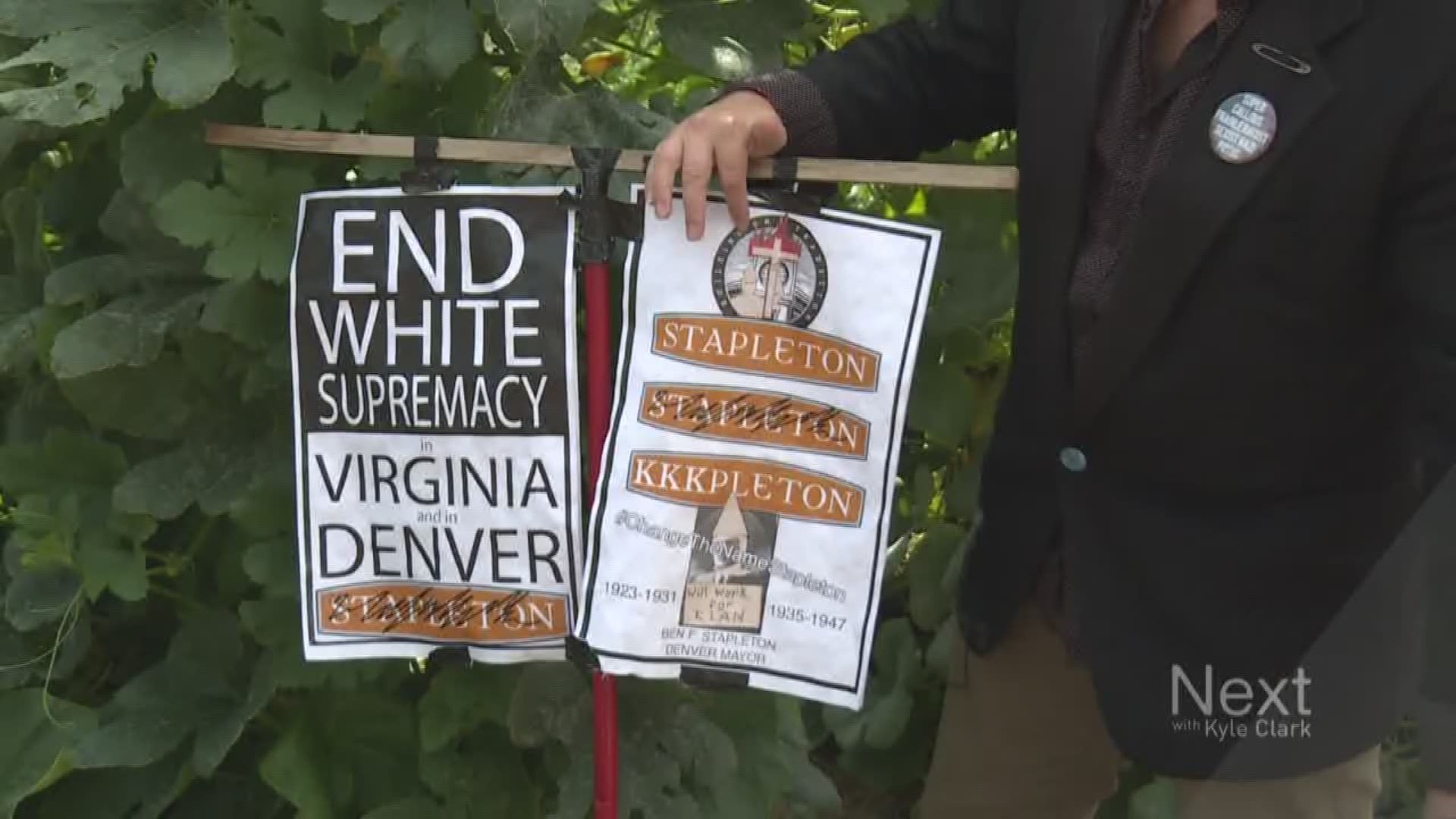 Colorado is not exempt from the renewed attention on white supremacy groups.

You may not realize that a popular neighborhood is named after Denver politician, who also was a member of the Ku Klux Klan.

"If they're not going to officially change the name, I'm going to stop using what I call the 'S' word and I'm going to call it 'KKKapleton,'" said activist Aaron Johnson, who interviewed with us in his backyard in the Valverde neighborhood of Denver.

"Nobody denies that Ben Stapleton comes with a lot of baggage, and I think that makes for a really healthy debate that gets people focused on their history. The Klan certainly endorsed a slate of candidates and he was one of them," said Hanson. "Stapleton is recognized for the same reasons that we have Speer Boulevard and the Webb Building. He was a mayor who left a major impact on Denver during his time here."

Stapleton is also credited with the construction of Red Rocks Amphitheater and the start of what would become Interstate 25.

Newspaper clippings from History Colorado that are from August 1924 editions of the Denver Post, show evidence of Stapleton's support of the KKK.

"When he was campaigning for election, (he) gave a speech to the Klan assembled on South Table Mountain outside of Golden, and told them that he would work with them and for them," said Hanson. "That's a quote from the newspapers of the day."

The developer of Stapleton is Forest City.

Forest City spokesman Thomas Gleason said that when it was selected in 1998, it agreed to develop new names for individual neighborhoods, schools, parks, pools and retail centers. He provided a list of those names, which we've included below.

Gleason also said that Stapleton is a geographic locator within Denver, no different than Washington Park or Park Hill.

"Why then is Forest City spending all this money to create a website, create a logo, put that branding on wine glasses, make radio advertisements that I keep hearing?" Johnson asks.

We asked Forest City why its website has Stapleton in the name and why it produces materials with Stapleton, if it's simply a geographic locator.

"The use of the name Stapleton in the items you refer to is all part of the marketing of this property, which is necessary for the project to succeed," said Gleason.

According to Amanda Allshouse, the president of the Stapleton United Neighbors association, a survey was conducted this past spring and the majority of residents who participated are OK with the Stapleton name.

The city said that any attempt to "memorialize" a change to the Stapleton name would need robust community conversation and a City Council resolution.

Streets:
Most streets on the former airport property, such as Martin Luther King Blvd., carry the same names as the streets in the surrounding communities. In some cases, new streets, such as Central Park Blvd. and Prairie Meadows Parkway, were added.

(Provided by Denver's Department of Community Planning and Development)

Census tract boundaries are established with the intention of being maintained over a long time period so that comparisons may be made from census to census. Where changes must occur because of population increases, annexations or changes in physical features, boundaries are retained or tracts are subdivided whenever possible.

The evolution of Denver between 1960 and 1970 required some changes.

Example: changing some tract boundaries to add small areas annexed to the city, or to adjust for revised physical features like Hampden freeway. Other boundary changes occurred when tracts were consolidated or split due to population drops or gains.

Before this delineation, a variety of different geographic systems had been developed by multiple local agencies, preventing the coordination of research, or historic comparison within and among the geographic areas. For example, in the 1960s, the city was divided into “residential” and “non-residential areas” for data purposes, but demographic and other changes made this an ineffective delineator, and it was changed around 1972.

Neighborhoods were delineated based on U.S. Census tract boundaries, but planners recognized that census tract code numbers did not readily evoke identifiable locations. To overcome this problem, individual tracts, or aggregates of up to four tracts, were assigned names corresponding to area “neighborhoods.” Neighborhood names were derived from some familiar internal feature, such as a well-known geographic or institutional feature (Bear Valley, Civic Center, University). Some were based on original subdivision names. The Stapleton “neighborhood” was delineated and named in 1972 based on the fact that it was almost completely comprised of Stapleton International Airport at the time.

WHAT'S IN A NAME?

Other: Others are names or nicknames that gain conventional use as the city changes. LoHi is a relatively new nickname for an area recently dubbed “Lower Highland” by some. “Ballpark” caught on after Coors Field was established in the 1990s, and is now the name of a corresponding historic district. According to the Denver Post, then-Denver-Post-columnist Dick Kreck coined the expression LoDo in a column he wrote on Nov. 2, 1983. Some names are floated but never catch on.