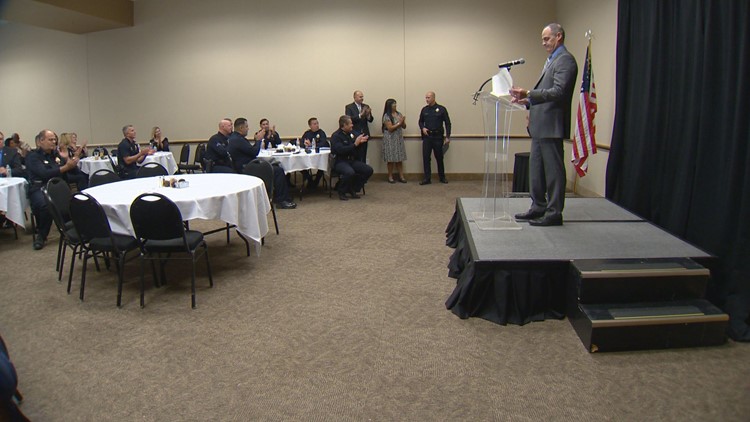 “It’s humbling, it’s quite an honor,” said Officer Day Lapira. “Practically every officer could have been nominated or could have received this award.”

Officer Lapira has a degree in Psychology and has also been a Crisis Intervention Training Instructor for the department for the past 12 years. She says officers go through at least 40 hours of training to learn how to recognize and handle people who are mentally ill.

“We ask them to be open-minded and express more empathy and compassion to whatever situation,” said Lapira.

Because there are a lack of treatment options in Colorado, people with mental illness often end up in the criminal justice system, according to the department. DPD said they want to be able to suggest resources to those in need of help as opposed to sending them to jail.

“I’ve known officers that would spend an hour talking to an individual about their options or showing their compassion towards the citizens,” said Lapira.

In addition to being honored, the officers also received some words of advice from another fellow first responder - Pastor Jomo Thomas, Chaplain for DPD.

“When you work in an environment where your life is on the line and you’re in environments where people don’t trust you, it’s very difficult on your emotional well-being because you’re going to work to protect people who don’t always value you,” said Thomas.

He said he wants the officers to think about their own mental health as they respond to situations like people suffering from depression, suicidal thoughts and road rage.

“Usually with mental health calls, the person is heightened emotionally, they’re unstable, they can’t communicate…you’re really trying to figure out the best way to handle this while staying safe,” Thomas said.

The department has also been increasing the number of squad cars carrying first responders who are social workers trained to de-escalate people in crisis.

“We need to know how to communicate, we know the difference between a person just acting rebellious versus someone who is maybe schizophrenic and off their meds,” said Thomas.

The luncheon was put on to honor the 14 officers, show how much they are appreciated and how they are an inspiration to the people they work with.

“That inspires me because they’re willing to go the extra effort to grow, and you can’t help but to have admiration for that,” said Thomas.