This might be hard to believe, but Colorado isn't really a rectangle

If you can pull yourself together after learning that fact, take a few minutes to read the story behind Colorado's borders. 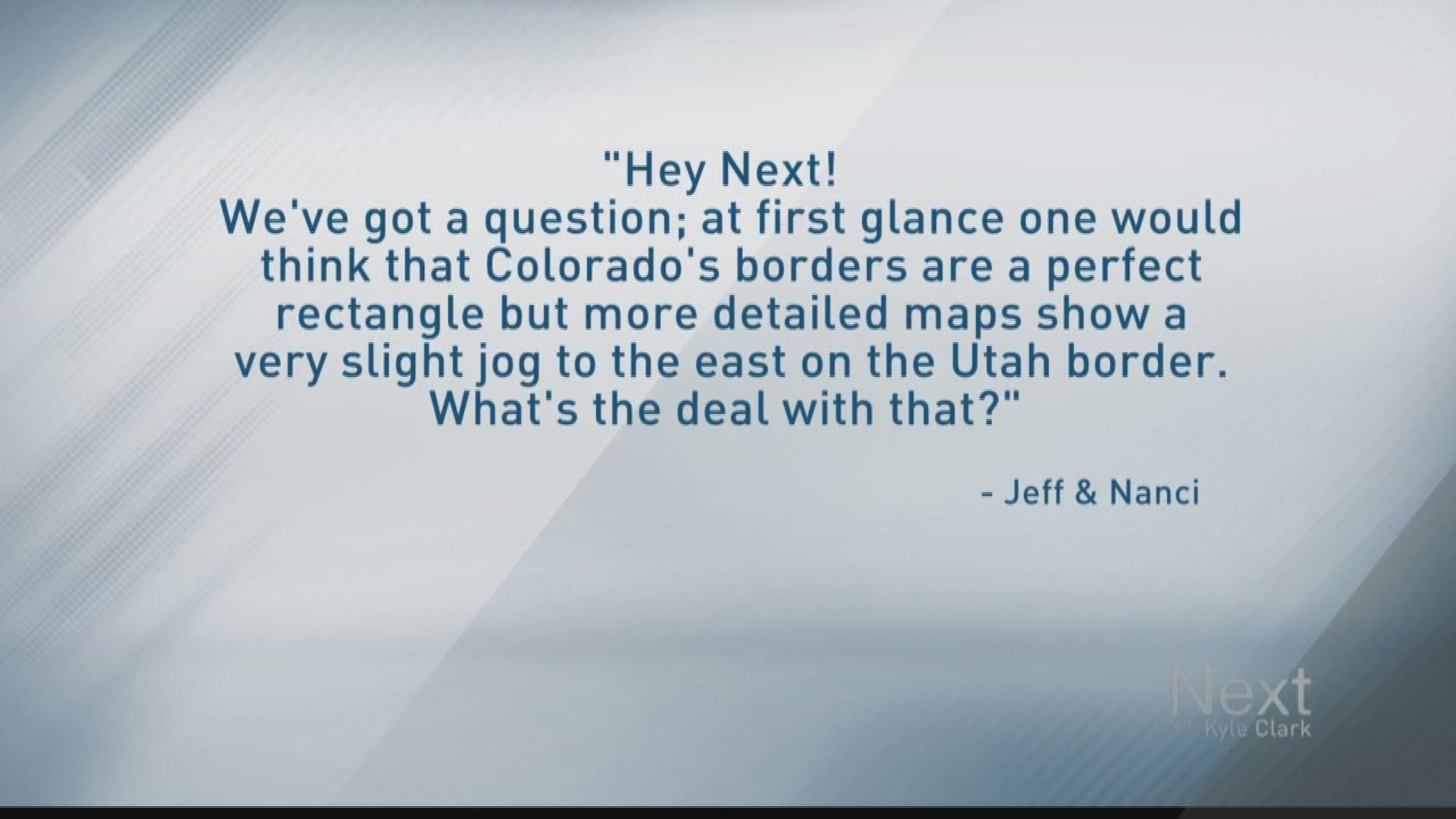 DENVER — Christopher Lane’s eyes squint with focus and light up with intrigue as he studies a map of Colorado that’s nearly a century old.

“What I like about antique maps is they show you what the people at that time understood about their world,” says the owner of Philadelphia Print Shop West in Cherry Creek.

Christopher Lane&rsquo;s eyes&nbsp;light up&nbsp;as he studies a map of Colorado that&rsquo;s nearly a century old. &ldquo;What I like about antique maps is they show you what the people at that time understood about their world,&rdquo; says the Philadelphia Print Shop West owner.

The story this, and many other old maps of the Centennial State tell isn’t exactly what the authors had in mind - in this case, the authors being the 36th United States Congress back on February 28, 1867.

It was that day when they declared the area of land bound on the North and South by the 37th and 41st parallels of north latitude, and on the East and West by the 25th and 32nd meridians of longitude west would be known as the state of Colorado.

"It was originally designed to be a rectangular state," Lane, who has studied maps for nearly 40 years, says. "Although it wouldn’t be quite rectangular because the lines of longitude converge as they get to the North."

Christopher Lane&rsquo;s eyes&nbsp;light up&nbsp;as he studies a map of Colorado that&rsquo;s nearly a century old. &ldquo;What I like about antique maps is they show you what the people at that time understood about their world,&rdquo; says the Philadelphia Print Shop West owner.

Essentially, the longitude lines we learned about in social studies class curve a bit because, ya know... the Earth is round.

But that alone isn't why Colorado is a little misshapen. Plotting out the exact boundaries without modern technology was no easy task.

“They would try to follow a line north,” explains Lane, “and they would run into a river or a canyon. They had to go around and figure out how to line themselves up."

Older methods like triangulation and using astrological sightings were used. These techniques resulted in some slight errors on the northern, western, and southern borders of Colorado.

"In 1879, Rollin Reeves did a survey, and he started at four corners (the intersection of Utah, Arizona, Colorado and New Mexico). And the intent was to head straight [north] until he hit the boarder with Wyoming," Lane explains. "As he was going on, he got up about 81 miles north of 4 corners and realized he had gone astray a bit. The problem was they were only paid by the miles, and he didn't want to go back to where he screwed up."

And that's why the most noticeable jagged line is just south of Paradox, Colo. on the Utah border.

“The border is about a mile to the west further than it should have been,” says Lane. “We’re talking about a mile difference after about 260 miles of surveying.”

Not bad for the late nineteenth century.

Something similar happened on the southern line when the survey was done in 1868. The only straight border Colorado has is to the East, Lane says.

At one point, New Mexico sued over the zig-zags, but it was ruled that the original survey would stand.

Colorado is not a rectangle. Thanks for showing us the way, Google Maps.&nbsp;

Today, the hiccups can be spotted using GPS based maps, but the discrepancies were so minor most map makers at the time didn’t bother to depict them. The tales the mistakes tell, and how they take you back to a different time; that’s what Lane finds interesting

“Yea there are a lot of interesting stories.”