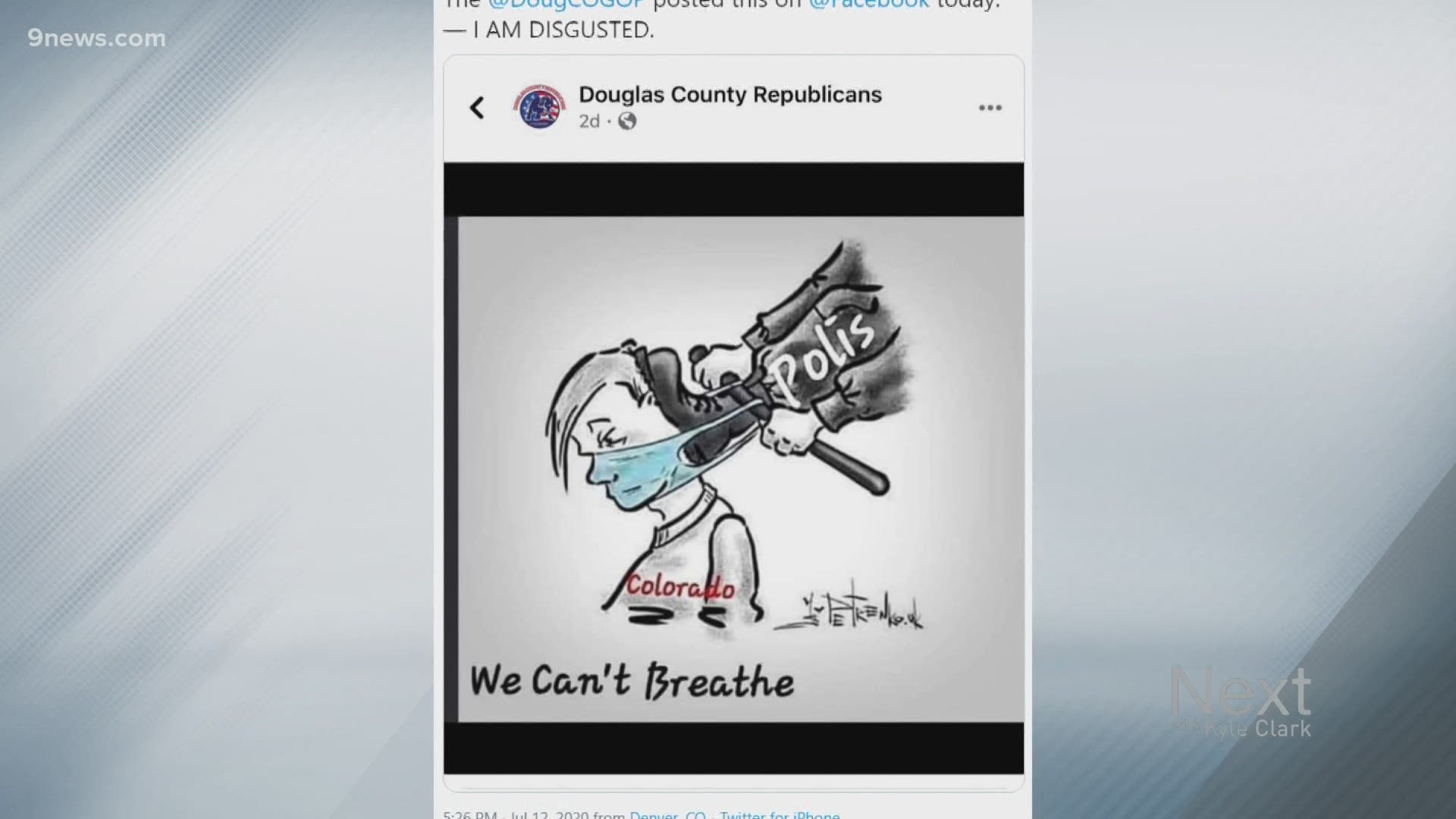 DENVER — It seems that the Tri-County Health Department (TCHD) does not accept the apologies made by the Douglas County Republicans for a Facebook post made over the weekend.

The now-deleted photo post compared Colorado Gov. Jared Polis' stance on masks during the COVID-19 pandemic to the death of George Floyd. The post showed a cartoon police officer labeled "Polis" stepping on the neck of a man and holding a mask to the man's face with a police baton.

The cartoon included the caption "We Can't Breathe," echoing the words said by Floyd, who died in May after a Minneapolis police officer held a knee to his neck.

"At Tri-County Public Health Department, we are sickened by the political cartoon that was recently placed on the Douglas County GOP’s Facebook page that likens a facemask mandate to the murder of George Floyd," TCHD said in a statement posted to its Facebook page on Tuesday. "Not only does this episode further polarize public discourse over responses to the worst pandemic we have faced in this country in over a century, but it also embodies exactly the kind of racial insensitivity that contributes to the burden of systemic racism in our country."

Tri-County Health Department
At Tri-County Public Health Department, we are sickened by the polit... ical cartoon that was recently placed on the Douglas County GOP's Facebook page that likens a facemask mandate to the murder of George Floyd.

Douglas County Republican Party Chairman Stephen Allen apologized for a second time for the post on Tuesday. An original statement expressed an apology to "anyone who was offended by the post." A new version omitted those words.

"As Chairman I am responsible for the content of our social media and I apologize for the post. We are currently reviewing our editorial policies with regard to content and access to our social media platforms," the statement said.

While Polis has urged Coloradans to wear a mask, he has not issued a statewide mask order.

TCHD issued a mask order for Adams, Arapahoe and Douglas counties last week, though Douglas County, as well as some city governments in TCHD's jurisdiction, have expressed intent to opt-out.

RELATED: 'The complacency needs to end': Polis asks Coloradans to keep their guard up in fight against COVID-19