We Truth Test ads in Colorado's Senate race: one about the Great American Outdoors Act by Republican Cory Gardner, and a healthcare ad by Democrat John Hickenlooper. 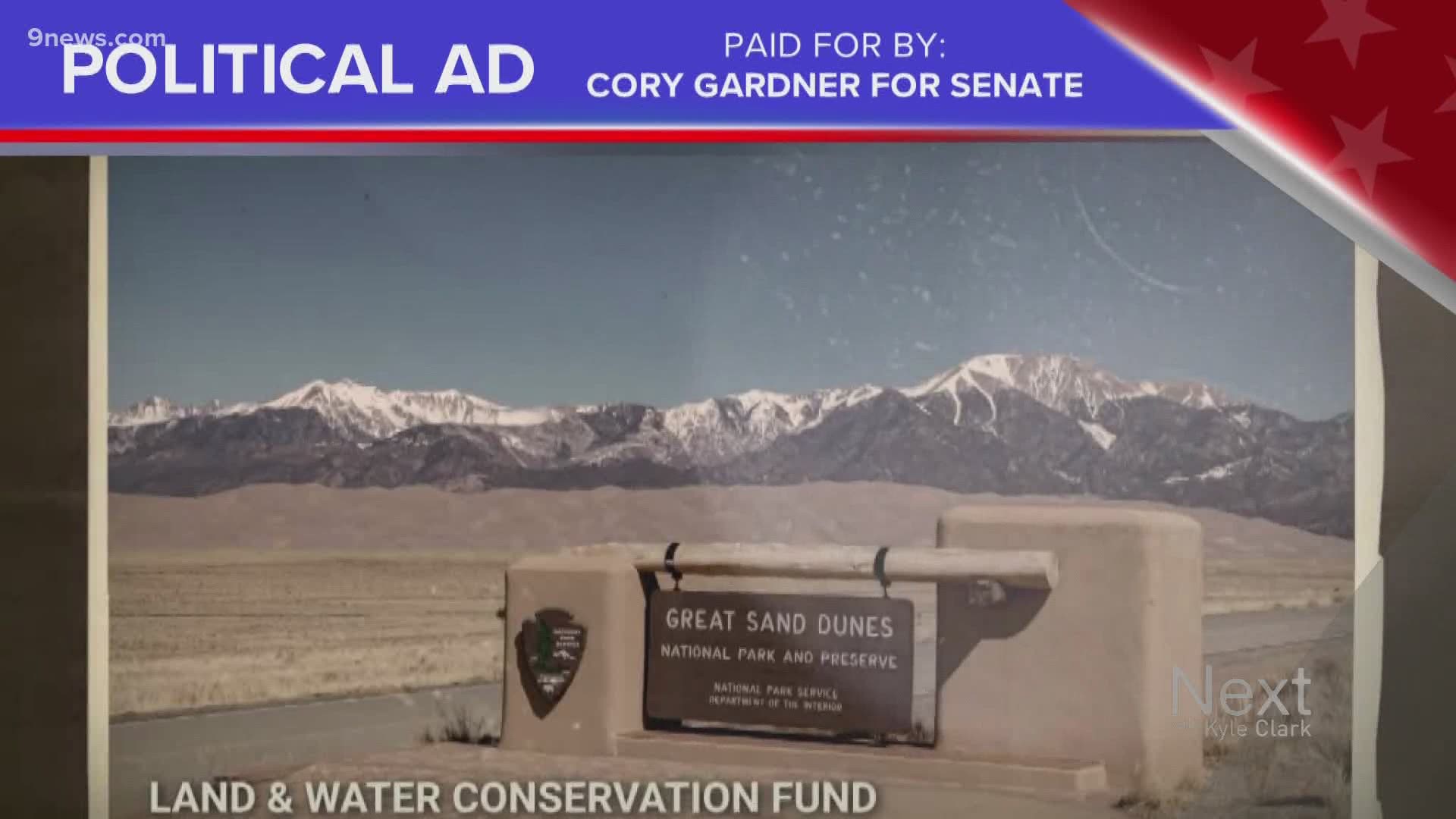 DENVER — Viewers have asked for Truth Tests of a few claims made in political ads in Colorado's U.S. Senate race: one paid for by incumbent Sen. Cory Gardner, a Republican, and one from his Democratic challenger, John Hickenlooper.

Hickenlooper: Get to Work

Hickenlooper's ad is called "Get to Work," and focuses on health care.

The claim that Next with Kyle Clark viewer Nancy asked about is this one:

AD CLAIM: "When I was governor, we got health coverage for 500,000 more Coloradans."

The claim that 500,000 more Coloradans got health coverage first relies on the Affordable Care Act getting passed by Congress and signed by President Obama. Neither of which relied on the governor of Colorado.

However, Hickenlooper did sign bills allowing for the provisions of the ACA to take effect.

The ACA required the expansion of Medicaid.

But, the United States Supreme Court ruled that states must choose to participate in the Medicaid expansion.

In 2013, the Democratic-controlled legislature passed Senate Bill 200, which expanded Medicaid eligibility in Colorado. Hickenlooper signed the bill into law. That allowed 400,000 additional people in Colorado to be eligible for Medicaid. It was a provision put in place by Congress that was allowed to happen in Colorado through this legislation.

In reverse, had the state legislature not passed this bill, and had Hickenlooper not signed it into law, you'd likely see a political ad saying that he prevented 400,000 people from having health insurance.

OVERALL: The wording of the claim is nuanced enough to be accurate and yet still need context. The insurance expansion would not have been possible without the Affordable Care Act, but at the same time, because of the Supreme Court ruling, states needed to act for people to receive the benefits of expanded Medicaid.

The ad paid for by Cory Gardner for Senate is entitled 1964 and is about the Land and Water Conservation Fund and the Great American Outdoors Act.

It starts by talking about Congress creating the Land and Water Conservation Fund in 1964.

AD CLAIM: "And for the next five decades, they stole its money, raided it for everything but the environment."

VERDICT: This is a stretch.

Over the last 55 years, Congress did use the Land and Water Conservation Fund money for the environment, just not all of the money it could have used.

The Congressional Research Service produced a report in 2019 detailing the history and spending of the Land and Water Conservation Fund.

The Land and Water Conservation Fund isn't an actual fund, where money is set aside. Consider it a placeholder for the spending of $900 million a year on federal land acquisitions and state grants. Except, Congress only spent $900 million twice since 1965. In 1998 and 2001, the appropriations by Congress were more than what Congress was authorized to allocate. In 1998, Congress spent $969 million and in 2001, it was $995 million. The next highest spending by Congress was $805 million back in 1978.

The money for the Land and Water Conservation Fund mainly comes from oil and gas leases on the Outer Continental Shelf. The Department of Interior's Bureau of Ocean Energy Management defines the Outer Continental Shelf as the submerged lands, subsoil, and seabed, lying between the seaward extent of the States' jurisdiction and the seaward extent of Federal jurisdiction.

Since 1965, Congress could have allocated $40.9 billion for federal land acquisition and state grants, but instead, it has only given the OK to $18.9 billion.

Since the Land and Water Conservation Fund isn't a separate piggy bank, it's not like the money is just sitting there not being used. The money is part of the Treasury Department, and Congress just chose to use it for other purposes.

AD CLAIM: "They'll never be able to do that again."

VERDICT: This is true.

Colorado has received $72 million for 1,030 projects from the Land and Water Conservation Fund.

Colorado Parks and Wildlife keeps an accounting of the spending and projects.

According to CPW, nine of Colorado State Parks have been acquired with assistance from that fund, including Barr Lake State Park and Golden Gate Canyon State Park.

In September, Montbello Open Space will open, which received $250,000 from the fund. That open space includes 4.5 acres restored to a prairie habitat area in the Montbello neighborhood of Denver.

The end of the ad refers to it as "Gardner's Law."

He was the main sponsor of the bill. There were 59 co-sponsors out of a 100-member Senate, including Gardner's colleague in Colorado, Democratic Sen. Michael Bennet.