Colorado's public health orders are as clear as mud with different rules for different places. Boulder and Weld counties have their own policies. Erie is in both. 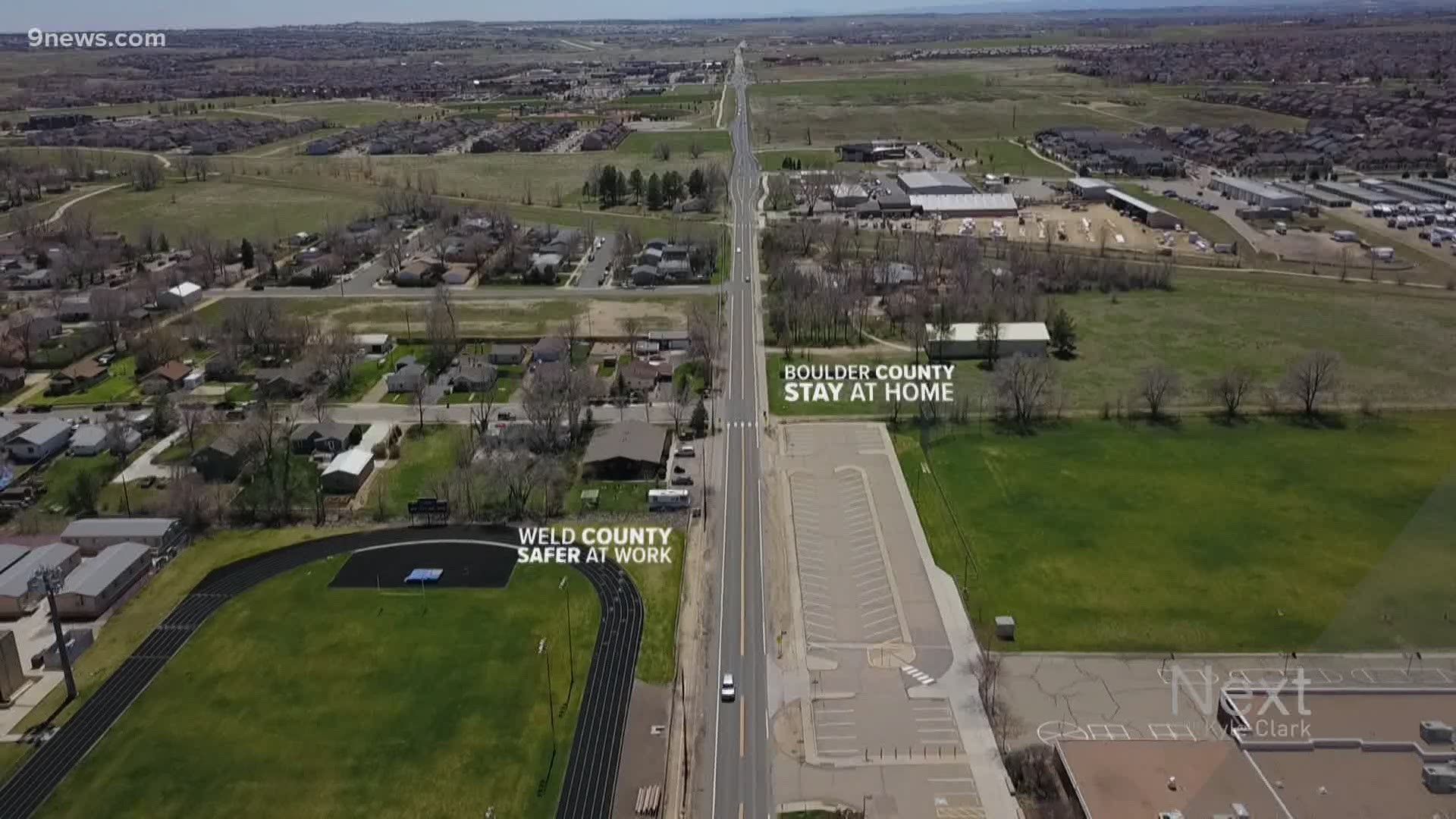 ERIE, Colo. — Colorado's public health orders are as clear as mud, especially with different rules for different cities and counties.

On April 27, the state of Colorado transitioned to "Safer at Home," where businesses can gradually re-open on a specific timeline.

If your county hasn't enacted more stringent public health orders, retail stores can start offering curbside pickup and real estate showings can start again. On May 1, retail and personal services can open up while practicing social distancing -- this includes salons and massage therapy. On May 4, non-critical offices can re-open at 50 percent.

Until May 8, Boulder County will stay with the stay-at-home order that Colorado has been used to for more than a month. The same with Denver, Adams, Arapahoe and Jefferson Counties.

Weld County, however, has taken the "Safer at Work" method, with commissioners saying that the county hasn't told businesses to close, so they are not the ones to say when businesses can or cannot open.

The town of Erie is divided by County Line Road. The west side of Erie is in Boulder County and under "Stay at Home" guidelines, while the east side is Weld County, which follows "Safer at Home."

On Tuesday, Town of Erie Trustees will vote on a resolution to have the Weld County side of the town -- the downtown side -- abide by the state's "Safer at Home" order.

"That way, if there are any lawsuits, we can point to a legal piece of paperwork that we have put together in order to state our intentions," said Haid.

During his Monday news conference, Gov. Jared Polis showed a graphic with the three options counties can abide by:

Eagle County has already received permission from the state to be more lenient with re-opening businesses. Mesa County is in the process of being approved also.

"These are areas that are able to, because of their great success in implementing public health and safety measures, can go further in loosening restrictions than the rest of the state," said Polis.

Weld County has not submitted a county suppression plan to be more lenient.

"Weld County is not yet there, they are a viral hotspot. They have not yet had 14 days of decreasing virus count in Weld County," said Polis. "They have to show either a very low number of cases per day, zero or one, very low, counties that haven't had a case in a week or two, or cases declining for the past 14 days, one of those two, and they need to show that they have an early warning system to swiftly detect and address an increase in community spread so we can be on it quickly."

He warned business owners that they could be risking their business licenses if they open faster than the state's guidelines, without permission.

"Businesses, as well, who are disregarding these safety regulations, will be issued a cease and desist order and can also have their licenses removed," said Polis.

Polis also said that counties will risk COVID-19 preparedness grant funding if they allow businesses to open too quickly.

In an email on Monday night, a spokesman for the Colorado State Joint Information Center said that COVID-19 preparedness grants are money from the Centers for Disease Control:

"Through the Public Health Emergency Preparedness (PHEP) grant program, the Office of Emergency Preparedness and Response received about $9 million last January from the Centers for Disease Control (CDC). The CDPHE kept 3.5 million to put toward internal response expenses and indirect costs. The remaining $5 million was distributed to local public health agencies to support their response. Typically counties are eligible for the funding, and the grants are not competitive -- we work with counties to develop their statements of work, put a contract in place, and allocate funds fairly according to a set formula. Regular PHEP grant funds are awarded to states on July 1, and those could be impacted by the information included in this Executive Order."