Knowing the number of people still waiting for a vaccine as of mid-February isn't an exact science for providers, as many Coloradans signed up for multiple lists. 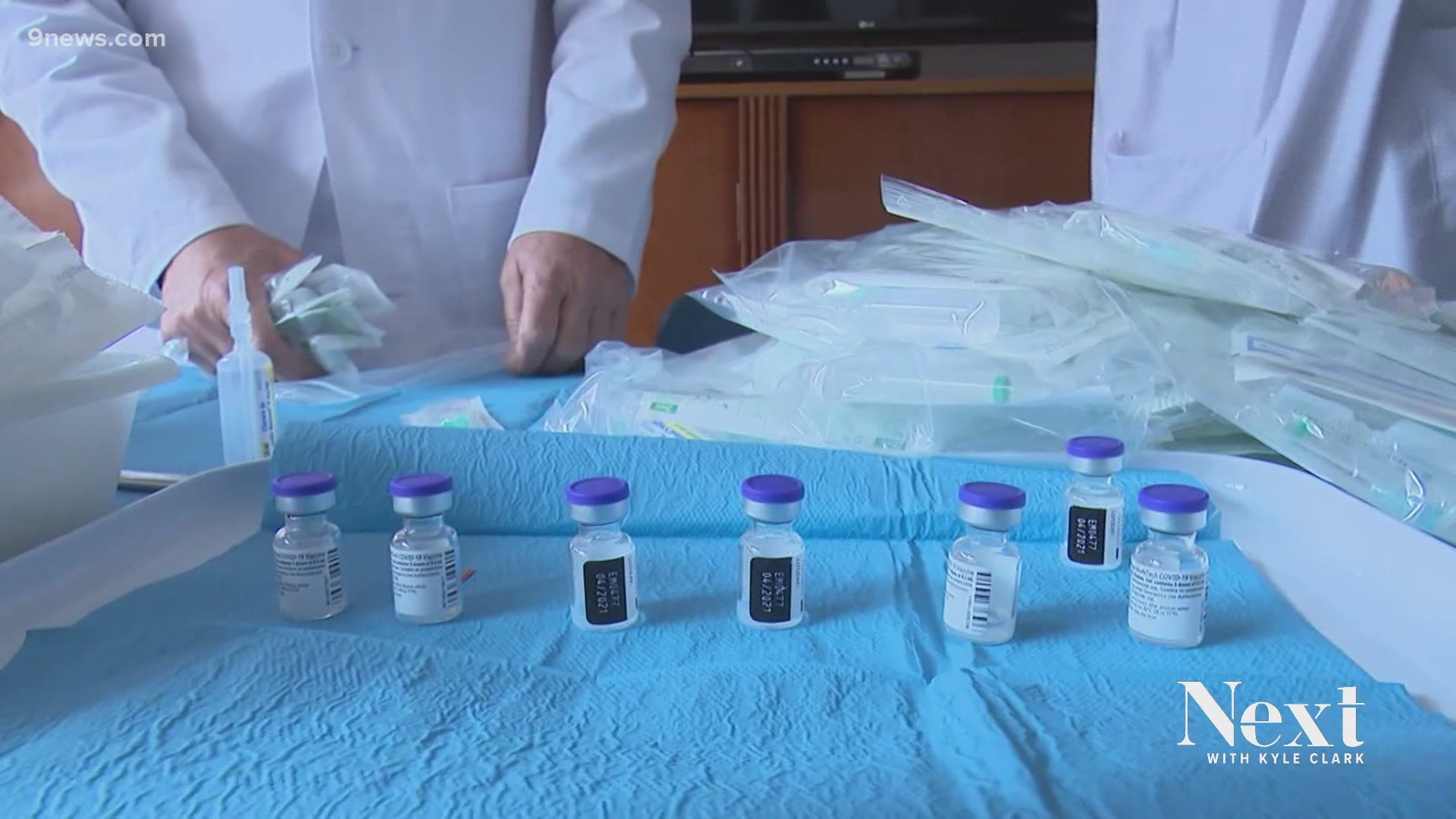 CENTENNIAL, Colo. — Rich Aylsworth, 85, should have no trouble getting his COVID-19 vaccine. But he just can’t seem to get the call for an appointment for his wife and himself.

“We signed up at Kaiser, Centura Health and UCHealth. And we haven’t gotten anything back from any of them really,” he said.

Aylsworth is one of quite a few seniors who reached out to 9NEWS frustrated over not being able to schedule a vaccine appointment as the state opens the pool of eligibility.

Last week, Colorado opened up vaccine eligibility for people older than 65 and people who work inside schools. As state leaders made that move, they reminded vaccine providers to continue to prioritize people over the age of 70 who were in the previous phase.

Only two of the metro area’s vaccine providers were able to give an estimate of how many people over age 70 were still on waitlists when 9NEWS reached out Monday.

SCL Health had 5,800 people over 70 on its list, according to spokesman Gregg Moss. Moss said the health system believes many of those people may have already received the vaccine from another provider and didn’t remove themselves from SCL Health’s list. He said all 5,800 would get a phone call to see if they still were seeking a vaccine appointment.

Kaiser Permanente of Colorado said as of Monday approximately 40,000 people over the age of 70 were on its list, according to spokesman Nick Roper.

RELATED: 'People with intellectual and developmental disabilities have been forgotten': Council pushes for vaccine priority for high-risk group

It’s difficult to say whether all of those individuals still need a vaccine. As people rushed to find appointments earlier this year, many signed up for multiple lists. Most providers have no way of knowing if people still on their lists have been vaccinated elsewhere.

Roper told 9NEWS Kaiser Permanente runs its waitlist against the state’s vaccination database to remove people from the list who have been vaccinated through other providers.

But representatives for Denver Health, National Jewish Health, Centura Health and UCHealth don’t follow that same procedure, so the unknown amount of already vaccinated individuals on lists doesn’t allow those systems to estimate how many people are still waiting.

UCHealth sees additional people sign up for its vaccine list each day, according to spokeswoman Jessica Berry. Berry said UCHealth has sent invitations to most people 70 and over who have signed up for online accounts and signed up for the phone list.

When the state shifted vaccine priority allowing people 65 and over to be vaccinated, Denver Health changed the sign-up form on its website, eliminating the 70+ category and leaving only 65+, according to spokeswoman April Valdez-Villa. That change makes it difficult to estimate how many people in the 70+ category are still in line, she said. Before the priority change, she said it was becoming difficult to fill clinics with only people in the 70 and over category.

Centura Health could not provide a number of people still on its waiting list either, according to spokesman Kevin Massey.

“Centura Health is continuing to use a randomized, equitable system for extending invitations to members of our communities who are eligible for COVID-19 vaccination based on phasing guidelines from CDPHE,” Massey said.

Use the form below to submit your vaccine-related story idea or question.

But some feel like they can’t win with the current system.

Tamara Monroe has been trying to help her 83-year-old parents find shots through their health system. Her mother has lung disease and her father is diabetic.

She said they have signed up through online lists for their health provider, UCHealth, and have doctor's appointments nearly every week.

“We can’t figure out how to get them at the top of the list,” Monroe said. “They’re always told ‘you’re on a list…we’ll contact you,’ and they just never get contacted.”

Karen Pellegrin feels similar frustration. Her father turned 78 Monday and has been unable to secure an appointment. She said she can’t believe the state opened up the pool to more people.

“You haven’t even finished the 70 and above,” she said. “It just feels like a fiefdom.”

Pellegrin is part of a growing list of people wondering why Colorado didn’t centralize the registration process for vaccines.

“Why we don’t have a consistent system,” she said “We have you in the database for driver’s licenses and IDs but we can’t get you set up for a shot.”

Contact 9News reporter Steve Staeger with tips about this or other stories by e-mailing steve@9news.com.