Vice President Mike Pence came and went from Colorado this summer, and law enforcement in Aspen wanted to be reimbursed for their time working the event. 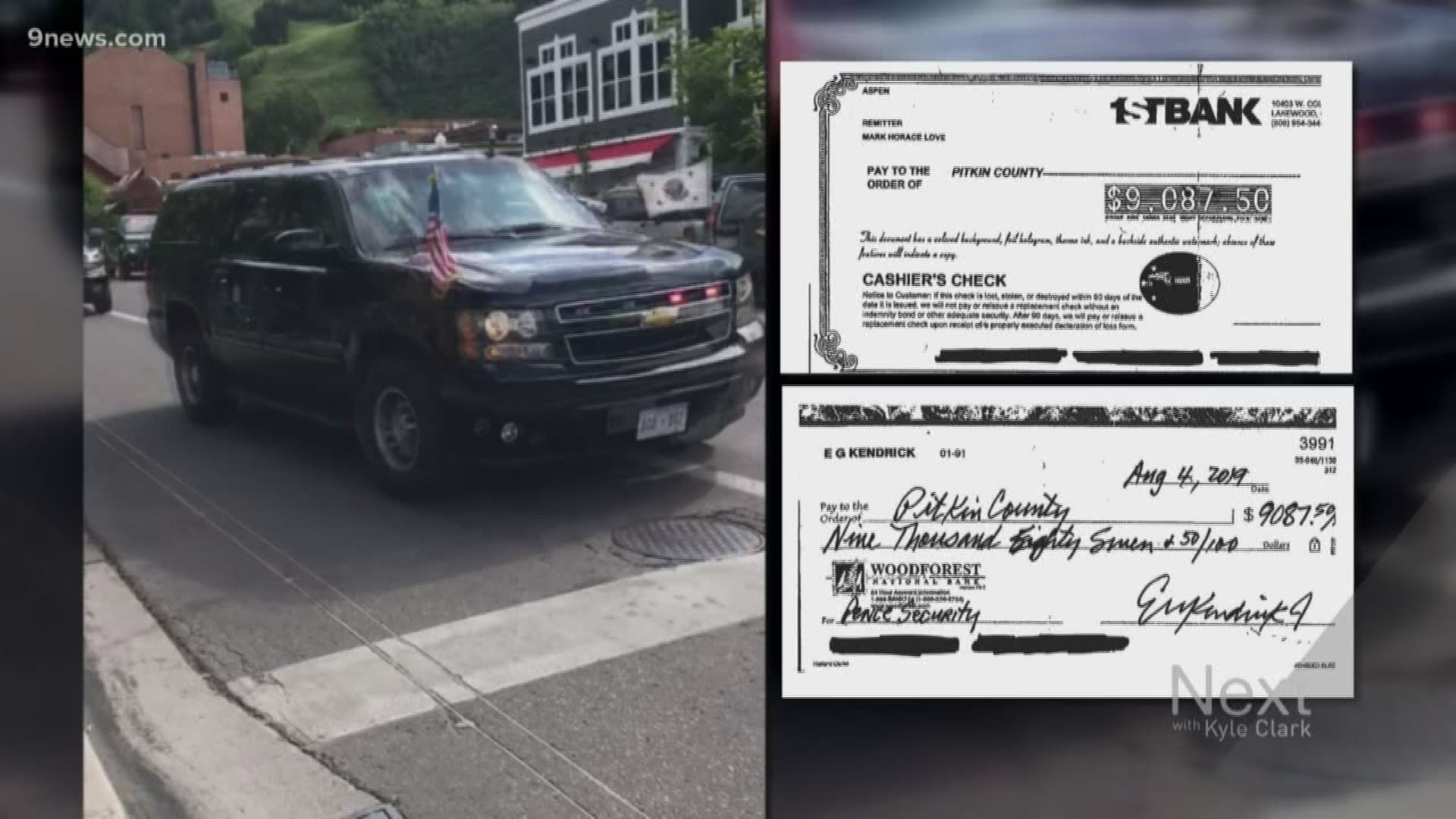 PITKIN COUNTY, Colo. — It's common for local law enforcement to help the U.S. Secret Service protect the president or, as we saw in Colorado in July, the vice president.

What's not so common is how the security tab from that day was reimbursed to Pitkin County and the sheriff, Joe Disalvo.

Long story short, a baseball executive pinch-hit for the hosts of a private fundraiser held in Aspen for Vice President Mike Pence.

Long story long, DiSalvo wanted to be reimbursed for the time his deputies spent helping protect the vice president on July 22 because there was no public component to the event.

"If you were a gun-toting cop, we put you out there," said DiSalvo.

DiSalvo had trouble finding the host of the party, but ultimately got paid last month.

"I don't know who really invited Mr. Pence here, I just know who paid us for his visit," said DiSalvo. "We got paid in two checks by two donors that preferred to be anonymous."

Except they're no longer anonymous because of public records. Next with Kyle Clark submitted a public records request and received a copy of the $9,087.50 checks from Mark Horace Love and E G Kendrick. Kendrick is the managing partner of the Arizona Diamondbacks.

"Usually, we don't have this much trouble. And we do ask way in advance, so it doesn't usually come as a surprise to the hosts," said DiSalvo. "I usually use that time to contact the hosts and say, 'this is an impact on my small department, and it does cost a lot of money, could you please reimburse us?' I've never really had a problem, and I'm not saying that this is a problem this time because we did get reimbursed, but it was kind of uncharted waters for me to have to dig and dig and dig just to find out who the host of this party was, and I still don't know."

Earlier that day, Pence had visited Windsor for a private fundraiser benefiting Republican Sen. Cory Gardner's reelection. After he landed, Pence greeted people at the airport and stopped to talk with reporters.

DiSalvo said that if Pence had done something public like that in Aspen, he wouldn't have wanted reimbursement for the private event's security.

"If he would have walked the rope line, I wouldn't have charged," DiSalvo told Next.

There is no requirement that the president or vice president reimburse local law enforcement for visits, even if they're political and not official visits. If someone pays, it's usually from a campaign account.

Since the payment came directly from individuals and not the Trump campaign, it isn't tracked by the Federal Elections Commission. Whereas contributions Kendrick made to Gardner's reelection campaign and former Congressman Mike Coffman's 2018 campaign are searchable. Those contributions were made to the campaigns and recorded with the FEC. These payments were not.

Weld County Sheriff Steve Reams did not charge for his deputies' time when Pence was in Windsor earlier that day. He said he was asked to private security by Secret Service, and he considered that part of the job.

"I think Sheriff Reams' budget can absorb that, I can't," said DiSalvo. "I understand a lot of people may think Aspen has money to burn, they're wrong. So, $18,000 to my constituents, I think, is a lot of money, and I think they deserve to be reimbursed."