Do not drink and bid. 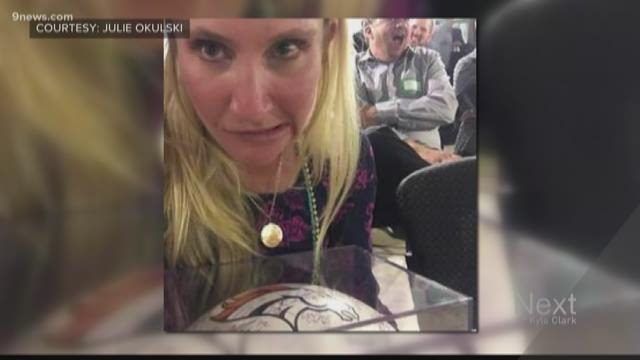 There are a few cardinal rules of alcohol.

Number 1: You do not get behind the wheel after drinking.

Number 2: Don’t go to Taco Bell. You’ll wake next to some Cheesy Gordita Crunch wrappers and feel a truckload of shame.

2A: But, part of you will be really happy you had the Taco Bell.

This is your wallet.

And this is your wallet on booze.

Juliana Laitos, in Denver, forgot to remember rule No. 3 over the weekend.

Laitos was at a live auction at the McNichols Center, to raise money for a local elementary school. Since it was a Friday evening, she decided to enjoy herself.

One thing led to another, and Laitos ended up bidding $890 on various items, including professional pet portraits, a vacation to Colorado Springs and an authentic Broncos football, signed by the 2017 team.

Bids for the football started around $100, but the numbers kept going up because of the competition.

"There was an aggressive woman bidder who kept outbidding me, and I was like, ‘Lady, I’m going to beat you,'" Laitos said.

Eventually, she got up to $675 for the ball, and it was SOLD! It didn't take long for Laitos to second-guess this decision.

"Oh, no. My husband is going to kill me," she remembers thinking.

So, she attempted to sell the thing on the NextDoor app, saying:

"Seeing as how I don't even have kids attending said elementary school, or in general, and no one in my household is a football aficionado, an autographed football makes about as much sense as a giant squid playing the piano."

No one has made any gangbuster offers... yet. It will sit on the mantle for now, but she says she's also open to looking for other school auctions she can donate it to.

In the meantime, Laitos has some free advice: