A viewer emailed Next with Kyle Clark encouraging us to take a deeper look into the term as it relates to equity and social justice. So we did. 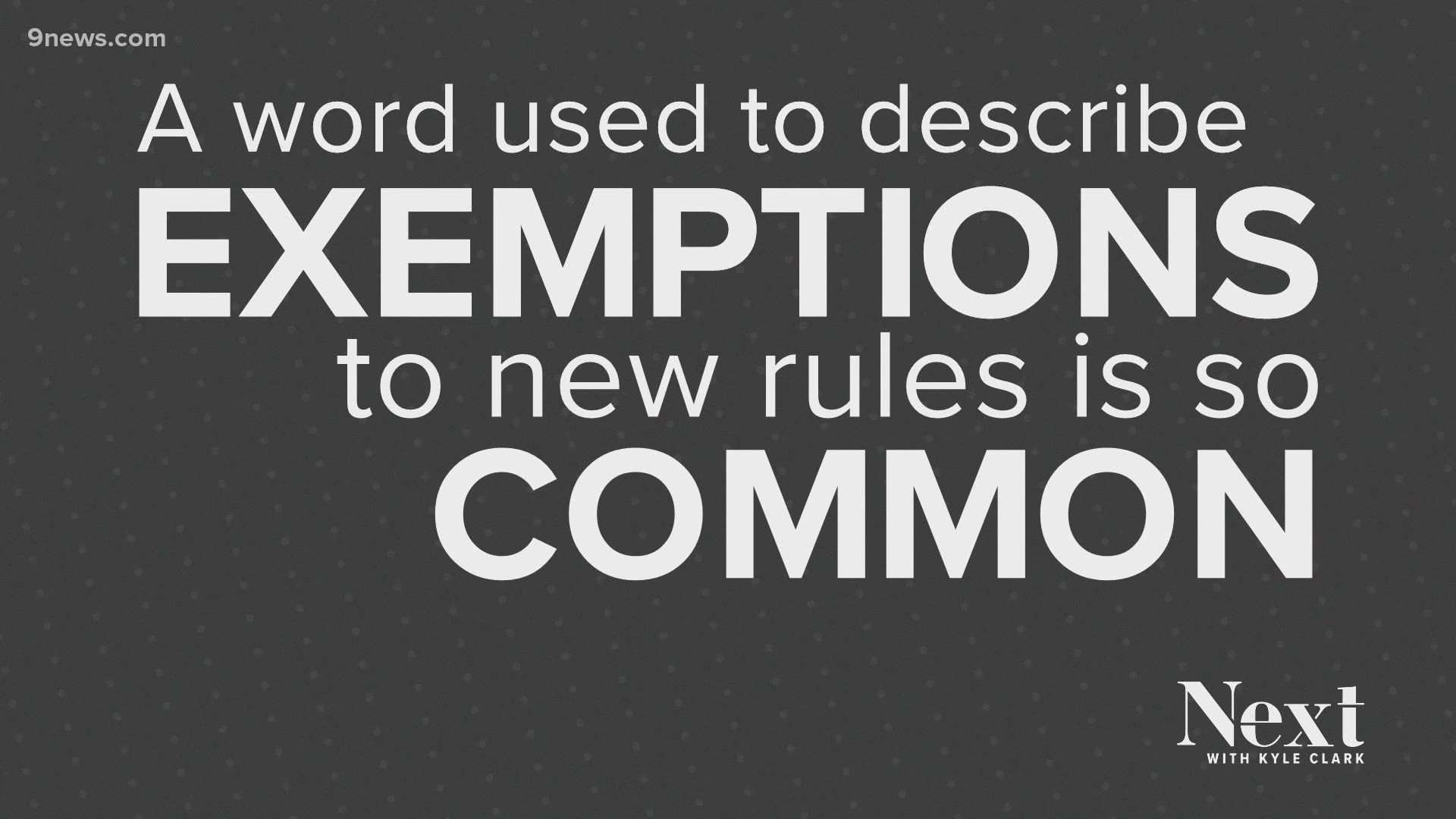 DENVER — A common term used to explain exemptions is going to be less common in this space.

On April 22, the Boulder County District Attorney filed more charges in the case against the Boulder King Soopers shooter. Ten of the new charges were for possessing a large-capacity gun magazine.

As part of that story, we explained under what conditions someone could legally have a large-capacity magazine in Colorado. One of the exemptions is if the large-capacity gun magazine was owned prior to July 1, 2013. We used the term "grandfathered" when explaining the exemption.

Jennifer emailed Next with Kyle Clark encouraging us to take a deeper look into the term as it relates to equity and social justice.

In 1870, the states ratified the 15th Amendment, which prohibited racial discrimination in voting.

Some states added laws requiring the passage of literacy tests or the paying of poll taxes to vote. "Grandfathering" gave the right to vote without a literacy test or having to pay a poll tax for a person whose grandfather had been eligible to vote. A requirement no African American could meet.

"Rules like 'grandfathering in' provided an exception even for whites who may not be able to qualify," said Allen.

RELATED: Fill in the Black: CU grad's card game is about learning, not winning

"We worked to make sure there was grandfather language," Dillard wrote.

"I like to fancy myself somewhat of a wordsmith," said Dillard in an interview. "But I had to find myself, checking myself, when you were doing your research for your story because it's a term that I've been casually using in a legislative sense."

For the rest of this story, Dillard is not representing the Denver Elections office, just perspective from a 50-plus year Denver resident.

"Words can be triggering. Acronyms can be triggering," said Dillard. "I used to work for Senator Ben Nighthorse Campbell, and every once in a while, we had to interface with the National Indian Gaming Association. Think of that acronym."

Dillard has words of his own that he would like to see reconsidered.

"If you really dig down into origins of a lot of words, some of them do have racist connotations. When we're talking to our realtor friends, things like the use of terms like 'plantation shutters.' "That's what they're called, but it makes the hair stand up on my neck a little bit," said Dillard.

"I am still amazed at how often plantation still comes up in American life," said Allen. "Whenever you talk about 'plantation shutters,' having a 'plantation-style wedding,' that is extremely offensive to the people who were oppressed and forced into labor on those plantations."

"I also like to talk about another term that gets used very frequently and thrown around, and that's the 'peanut gallery.' The 'peanut gallery' also has connotations from the Jim Crow South, where that type of segregation occurred, like in theaters," said Dillard.

"Peanut gallery" refers to the cheap, top section of a theater.

"My husband, actually, grew up in the segregated south and had to sit in the balcony, in the so-called 'peanut gallery' that was reserved for 'colored people,'" said Allen.

With the Denver real estate market booming, other terms with deeper meaning are likely used regularly without much thought.

"Terms like the 'master bedroom' or the 'king-size bed,' that's really focused on the wealthy, most affluent class. When you talk about 'master bedrooms,' you're talking about the bedroom of the master that has its roots in enslavement," said Allen.

An alternative could be "primary" bedroom or "main."

"As we continue to have these conversations about racial equity and justice and bias, we always have to allow the space and grace to grow," said Allen.

An alternative for "grandfathered" could be "legacy."

"There are going to be lots of terms that people are not familiar with that are felt and viewed as discriminatory, offensive or as microaggressions to the groups that are impacted by them," said Allen. "We say things like, 'I had to Jew them down,' which is anti-Semitic. We say, 'I was gypped.' We say things like 'the paddy wagon.' We have to be mindful that these terms are rooted in racism."

"Even during the protests that happened after the George Floyd murder and those, you know, what's the colloquial term we use when law enforcement brings the big vehicles to round people up? They're called 'paddy wagons,' And then you're like, 'well, wait a minute, what do our Irish brothers and sisters think about the way that term gets thrown around?'"

Inevitably, someone will read this and respond that "it's just a word!"

"I am, certainly, never one of those people who is just going to inject race into every single moment," said Dillard. "But words can be harmful, and there are a lot of terms that we use just as our society, and as Americans, that sometimes people may not be aware of the origins of the words."

"It's OK where you are. It's just not OK to stay there. Once you learn better, do better," said Allen. "This is not the time to defend it, to say I didn't mean it, to say you're too defensive, it's to stop."

"Given how divided our country is right now, people just need to take the extra beat, that extra second when using certain terms, and then just determine if they could have, maybe, used a better one," said Dillard.

Even the experts in this area find themselves learning about the meaning of words they did not previously know.

"I thank the person, apologize, ask for forgiveness and never use the term again," said Allen.

RELATED: US will no longer call migrants 'aliens' under Biden