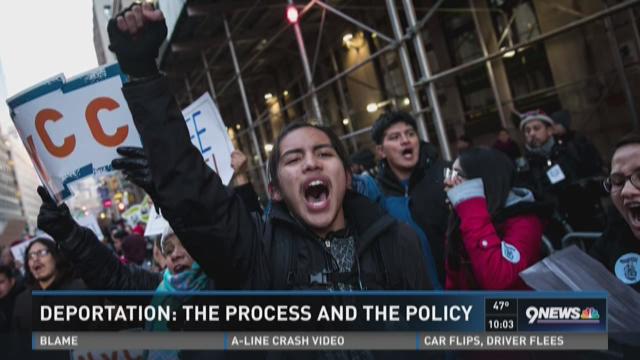 For others in the immigrant rights community it's a reason for fear.

Renewed focus on this issue is leading many to ask questions about deportation, including a record number of deportations under President Obama.

The trend has been going on for decades. The Department of Homeland Security reports a fairly consistent trend upwards of people being deported since the 1990s. The trend continued when President Obama entered office, hitting a record in 2013. Around 434,000 thousand people were deported.

Then the deportation numbers started to go down.

The Pew Research Center attributes the decline in 2014 to a shift in focus to deporting at-large convicted criminals. And on more state and local law enforcement agencies not honoring immigration authorities request to detain people in jail set for deportation.

President Obama prioritized deporting people deemed a national security threat or people convicted of a crime, including felonies, or convicted for being a part of a street gang.

The same DHS statistics reported by the Pew Research center shows more than half the people continuing to be deported did not have a criminal history, dating back to 2001 through the Obama Administration immigration changes.

As for President Trump, he's also focusing on national security, but his priority list broadened to include people who "committed acts that constitute a chargeable criminal offense" and "have been charged with any criminal offense, where such charge has not been resolved," according to the executive order.

The order also saying defrauding the government would make someone top priority to be deported.

The feds know people are in the country illegally but haven't deported them. Part of the reason why is federal agencies have limited resources and simply can't remove everyone, already spending around $2 billion a year on immigration detention alone, according to César Garcia Hernandez, the Assistant Professor University of Denver Sturm College of Law.

It would take an act of congress to expand the Department of Homeland Security budget. Though President Trump's executive order says he wants to hire 10,000 additional immigration officers.

His policies spark a loud reaction from those in support of keeping families together, and those who have made America home for decades and don't pose a security threat.

On the flip side, others are worried people here illegally are working for lower wages in sub-par conditions, affecting job opportunities for U.S. Citizens.