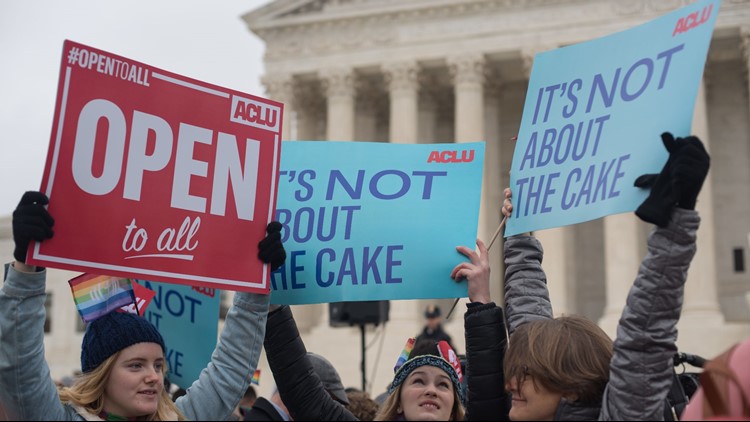 Photo by: MARI MATSURI
People gather outside the US Supreme Court before Masterpiece Cakeshop vs. Colorado Civil Rights Commission is heard on December 5, 2017 in Washington, DC.

How the supreme court could decide the cake shop case

The U.S. Supreme Court's coming decision on whether a Lakewood baker discriminated against a gay couple by refusing to make their wedding cake could have a far-reaching impact.
Author: Anna Staver
Published: 5:32 PM MDT May 31, 2018
Updated: 8:32 AM MDT June 4, 2018

KUSA - The U.S. Supreme Court is inching closer to a decision about whether a Lakewood baker discriminated against a couple based on their sexual orientation when he refused to make them a wedding cake.

A decision in Masterpiece Cakeshop v. Colorado Civil Rights Commission could come as early as Monday.

How the nine justices decide this case could change how thousands of wedding vendors across the country do business, or they could leave all the local laws in place just as they are now.

To understand all the different ways the court could rule in this case, 9NEWS interviewed Craig Konnoth, a law professor at the University of Colorado.

Konnoth wrote an amicus brief for this case that was cited by the couple’s lawyers, and he was at the Supreme Court during oral arguments.

Before we get into how the case could be decided, here’s a quick recap of the facts:

In 2012, Charlie Craig and David Mullins went Masterpiece Cakeshop to talk about ordering a wedding cake. The owner of the shop, Jack Phillips, turned the couple away.

Phillips said he believes marriage is only between a man and a woman and said making the gay couple a custom cake would go against his Christian beliefs.

Phillips appealed the decision, claiming Colorado’s law violates his First Amendment right to free speech because baking a wedding cake for a celebration that goes against his religious beliefs is “compelled speech.”

This is one of the simplest possible rulings to explain, but it would have a significant impact. It would allow any kind of business to turn people away based on religious belief.

Konnoth thinks this outcome is unlikely because even the court’s conservative justices appeared concerned that a broad ruling could undermine decades of civil rights protections.

NO EXEMPTION FOR RELIGIOUS BELIEF

This is the opposite of the previous example.

In this ruling, the court would decide that Phillips and all business owners have no right to deny any services or goods to people based on their sexual orientation.

A RULING THAT ONLY IMPACTS COLORADO

One of the arguments made by Phillips’ lawyers was that a commissioner on the Civil Rights Commission displayed an anti-religious bias.

The court could send the case back to Colorado or invalidate the commission’s findings without commenting on the constitutionality of the state’s anti-discrimination law.

“It would simply say this commissioner applied the law in an unconstitutional way,” Konnoth said.

That would mean another baker, photographer or florist would have to bring another case to the court to decide whether refusing services to a gay couple is protected speech or discriminatory.

Konnoth said he thinks this might be what happens because he thought Justice Anthony Kennedy – who is the swing vote on the court -- seemed “really upset” by what one of the commissioners said.

“Tolerance is essential in a free society,” Kennedy said during oral arguments. “And tolerance is most meaningful when it's mutual. It seems to me that the state in its position here has been neither tolerant nor respectful of Mr. Phillips' religious beliefs.”

A RULING FOR MASTERPIECE BUT AGAINST OTHER BAKERS

The court could also decide that Colorado’s anti-discrimination law is valid, but the case against Phillips was “infected” by anti-religious bias, Konnoth said.

That means Craig and Mullins would lose their case, but it would be a victory for gay couples in general.

A RULING FOR ALL BAKERS

In this situation, the court would decide whether baking a wedding cake is compelled speech, but it wouldn’t expand the decision to other businesses.

For example, the court could decide a custom cake isn’t speech, but leave the door open to a photographer or musical group.

“You would have a whole bunch of other cases coming up,” Konnoth said.

The court’s liberal justices appeared to take issue with having to decide this case repeatedly.

“You have a view that a cake can be speech because it involves great skill and artistry. And I guess I'm wondering, if that's the case, you know, how do you draw a line?” Justice Elena Kagan said. “How do you decide, 'Oh, of course, the chef and the baker are on one side … versus the hairstylist or the makeup artist?' I mean, where would you put a tailor, a tailor who makes a wonderful suit of clothes? Where does that come in?”

That’s the crux of the problem with this kind of decision, Konnoth said. The court would have to decide what kinds of jobs are artistic enough to merit free speech protections.

A RULING THAT DEPENDS ON WHERE YOU LIVE

This kind of ruling would hinge on whether plaintiffs had other options for wedding cakes.

In rural parts of the country, there might be one or two businesses that bake cakes or take wedding photos, which means a couple could be out of luck if someone turned them away.

“In that case the government’s purpose to protect couples against discrimination means we could compel the baker to make that cake,” Konnoth said.

That means courts would eventually have to decide how far is too far to travel for alternative vendors.