Jared Polis, Donna Lynne, Cary Kennedy and Mike Johnston debated the issues important and argued why they should be Colorado's next governor in a debate on 9NEWS Monday night. 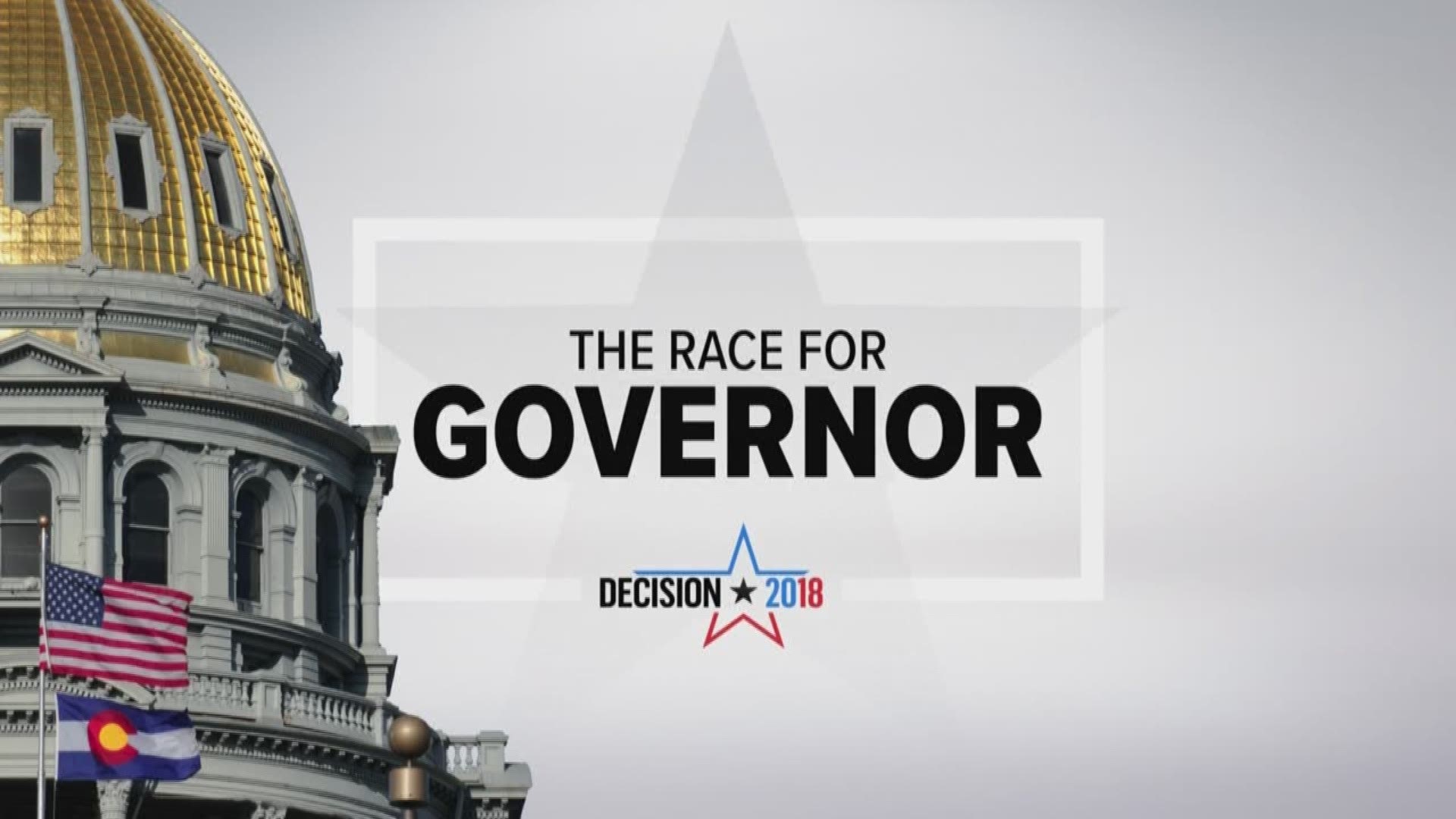 All four Democratic candidates for Colorado's next governor agreed to participate in 9NEWS’ last Democratic gubernatorial debate before the June 26 primaries. The candidates discussed a number of topics selected by 9NEWS. Anchor Kyle Clark and political reporter Brandon Rittiman moderated the debate.

For the first time in the state's history, unaffiliated voters are allowed to vote in either the Democratic or Republican primaries - not both.

RELATED | Colorado’s June primary election: what you need to know

The GOP gubernatorial debate is at 7 p.m. on June 7 (this Thursday).

At the March 6 Democratic caucus, Kennedy came up with a surprise 49.2 percent at last tally, higher than previous front-runner Polis at just 32.7 percent. Johnston came up with 8.8 percent of the vote. Lynne did not participate in the precinct caucuses statewide and instead made the ballot through the petition process.

PREVIOUS DEM DEBATE | What happened during the Democratic gubernatorial debate

PREVIOUS GOP DEBATE | What happened during the Republican gubernatorial debate 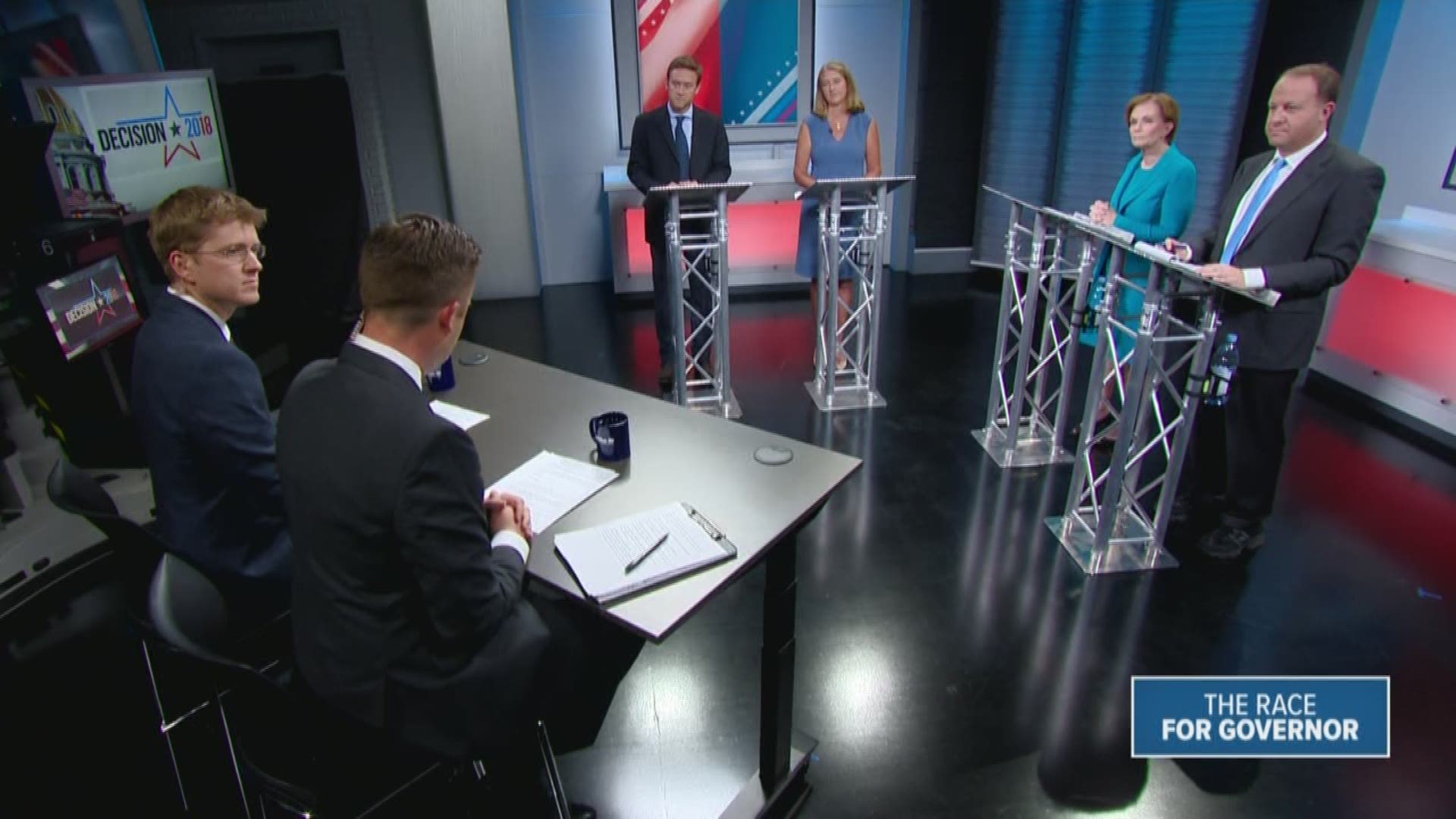 Justice Anthony Kennedy was stern in his rebuke of the Colorado Civil Rights Commission's actions toward Jack Phillips, the owner of Masterpiece Cakeshop who refused to bake a cake for a local gay couple's wedding.

The four candidates all disagreed with the Supreme Court decision and voiced support for gay couples.

Lynne and Kennedy pointed out the court's decision was narrow and that this was not a landmark case with wide-reaching implications.

Editor's note: Part of the format for this debate involved a simple show of hands to let voters quickly understand where candidates stood.

All candidates - Johnston, Kennedy, Lynne and Polis - were against forcing churches to perform gay marriages.

Every candidate was for signing a bill that would ban assault-style weapons from Colorado.

None were for a retroactive ban on assault-style weapons or high-capacity magazine ban. A retroactive ban would not only criminalize sales of such things but also force anyone who had them to return them to their local law enforcement. 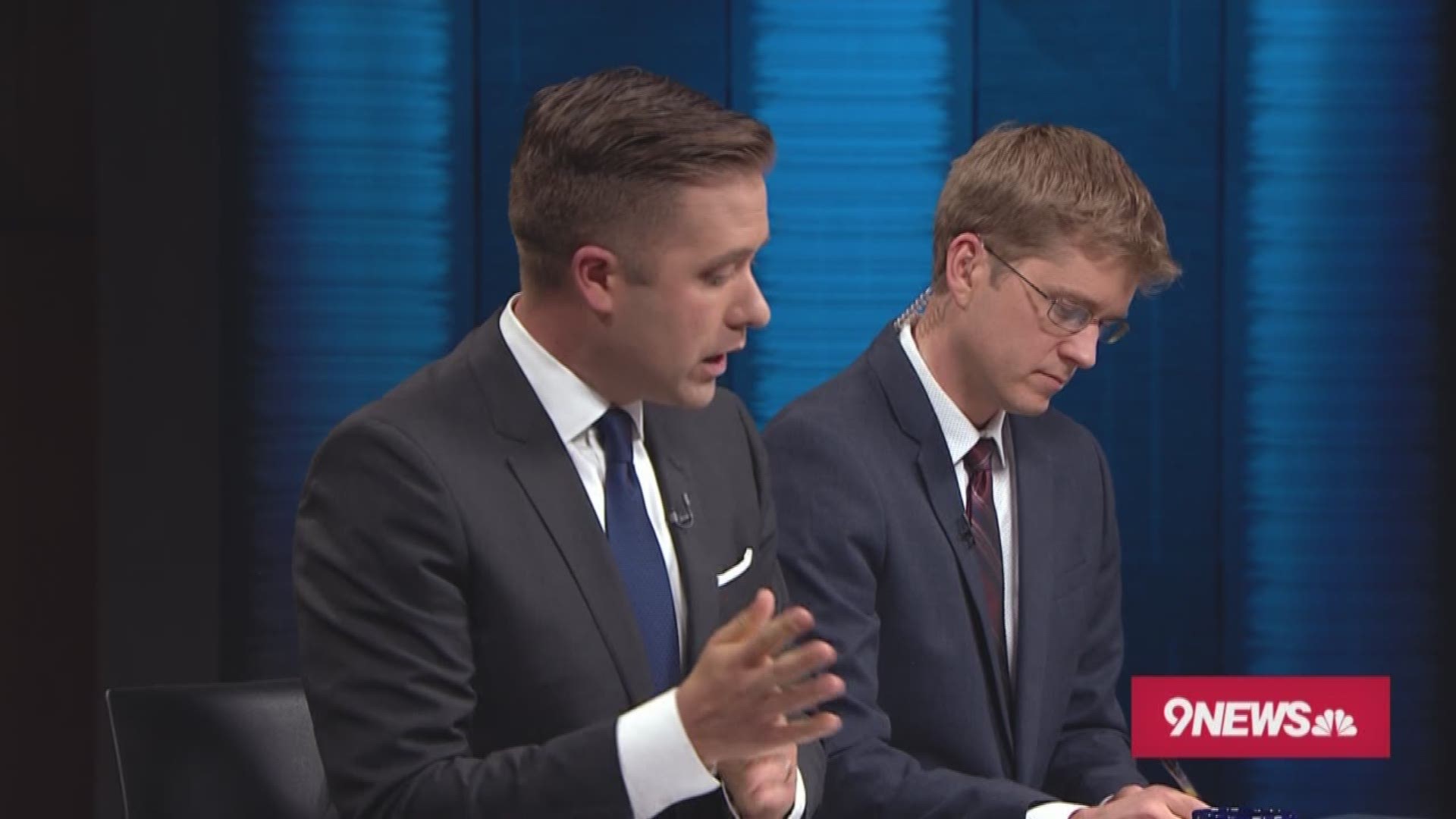 Both Polis and Johnston were for criminal liability in specific cases. Polis didn't want to put undue stress on hunters and those who have guns for self-defense.

Johnston explained that parents who don't secure their guns from their children would likely face criminal liability, but a gun owner with roommates whose roommate used their weapon in a crime the gun owner wouldn't be liable.

Lynne, who told a voter at the 9NEWS political speed-dating event she was afraid of guns, explained that just because she would never want to hold a firearm doesn't mean she couldn't understand the Second Amendment.

She compared it to a common personal preference, like what music people like. She said guns were a protected right of the Constitution.

Gun control as discussed by Johnston and Polis

Both Johnston and Polis started the discussion of gun control. Polis said he'd been taking on the NRA since he was first elected and Johnston said that he was a statewide advocate for gun control.

Then Johnston doubled back and said he supported state legislation to ban "assault" weapons but Polis came out publicly against it, killing Colorado Democrats' support for the bill.

Polis' deep cash reserves and what it means 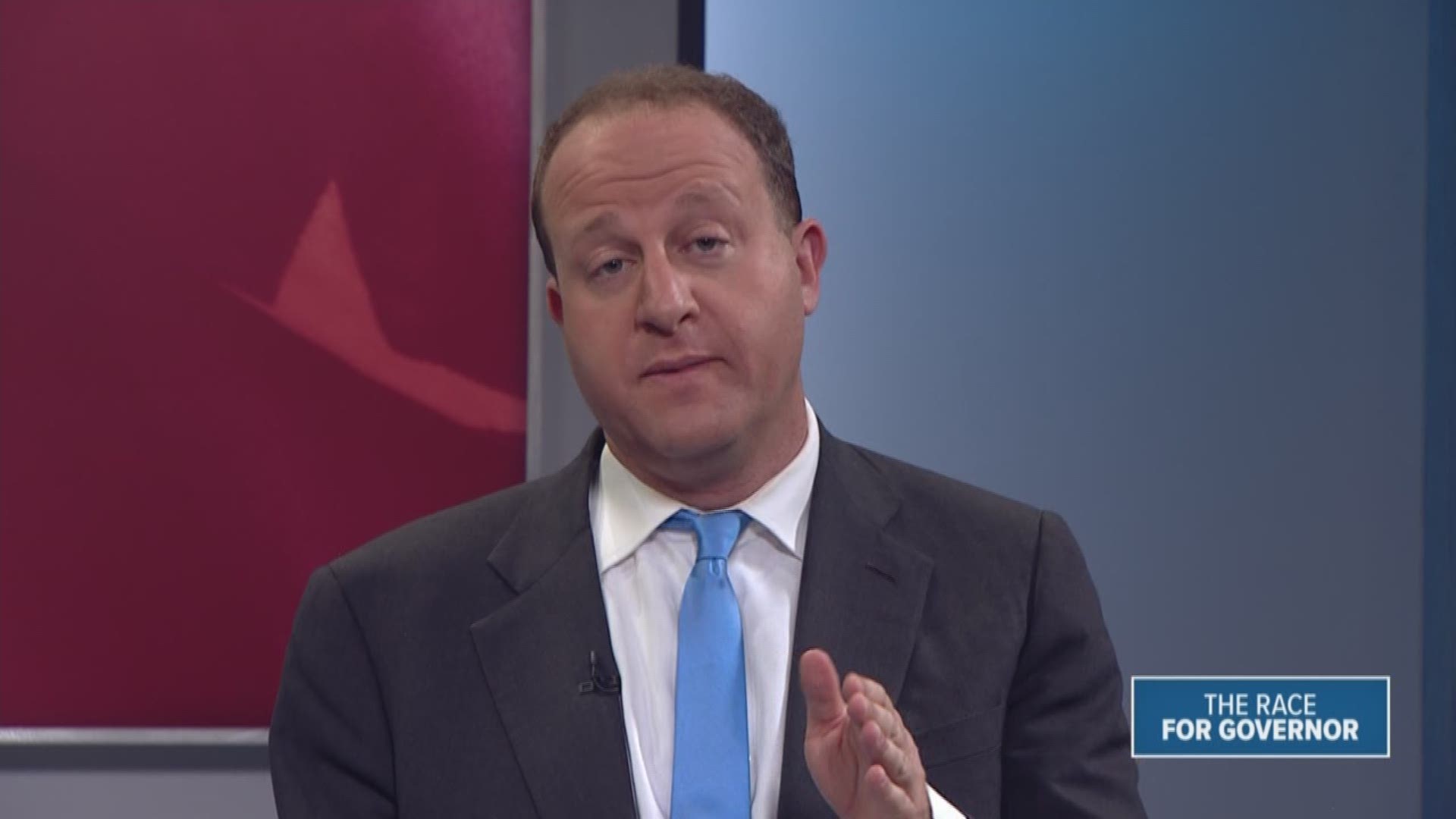 When Polis was asked about his deep cash reserves - he is funding his campaign and capping any donations at $100 - he told our moderators that it was a feature, not a bug.

Lynne said she was the only candidate not to take $1 million from anyone and Rittiman, a 9NEWS political reporter, interrupted her to ask if anyone had offered her that much money.

She countered that she had been in talks with some people but worried there was too much money in the race already. 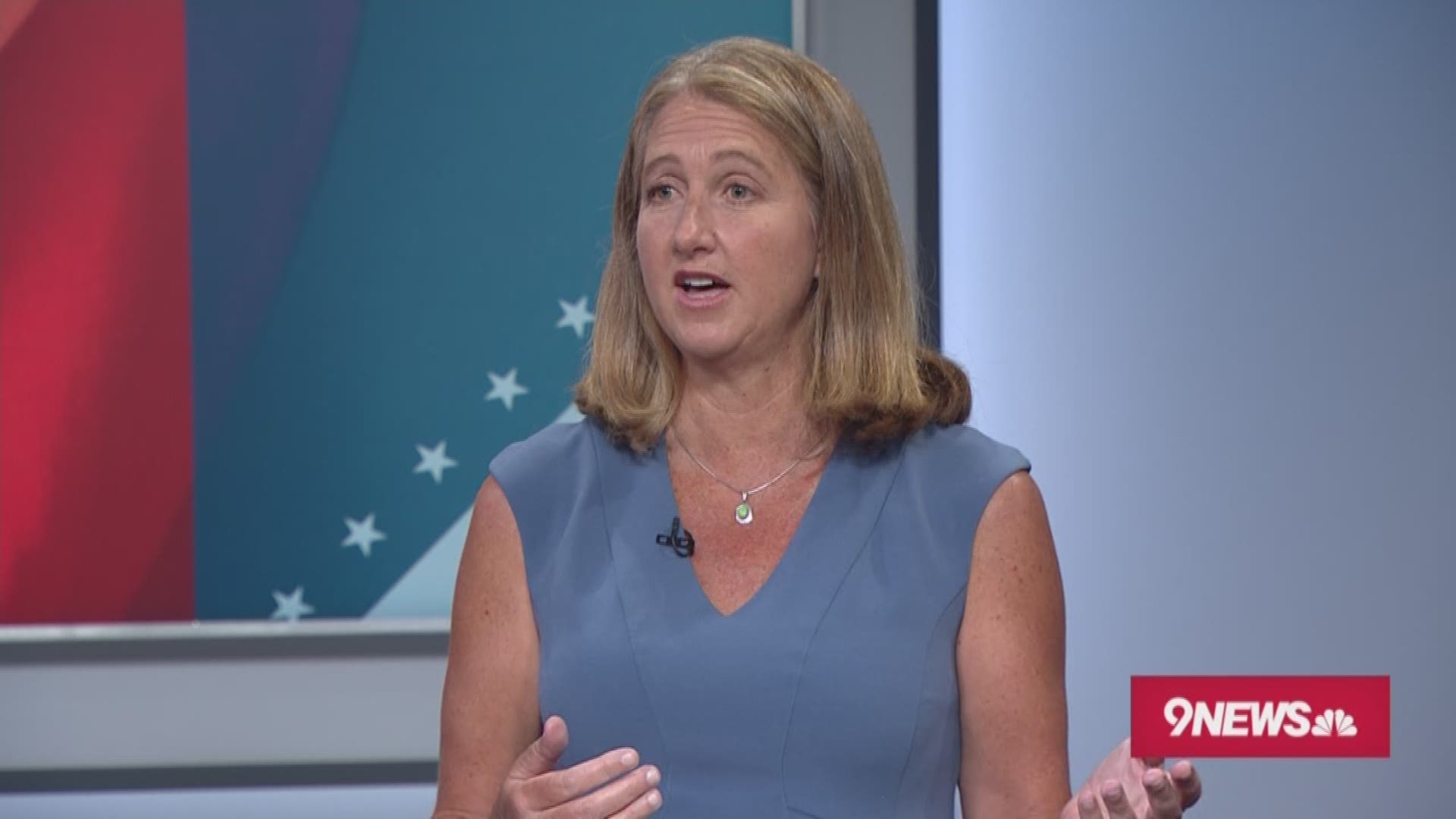 Our moderators then switched gears and talked about how Kennedy had the support of Colorado's largest teachers' union.

She said she was proud to have the union's support and said she believes the state has fallen behind in its support of public schools. She supports what the teachers were fighting for when they demonstrated outside the Capitol in Denver; higher pay, more funding and support for their pensions.

She was only one to speak during that round of questions.

Charter schools, vouchers and what the candidates think 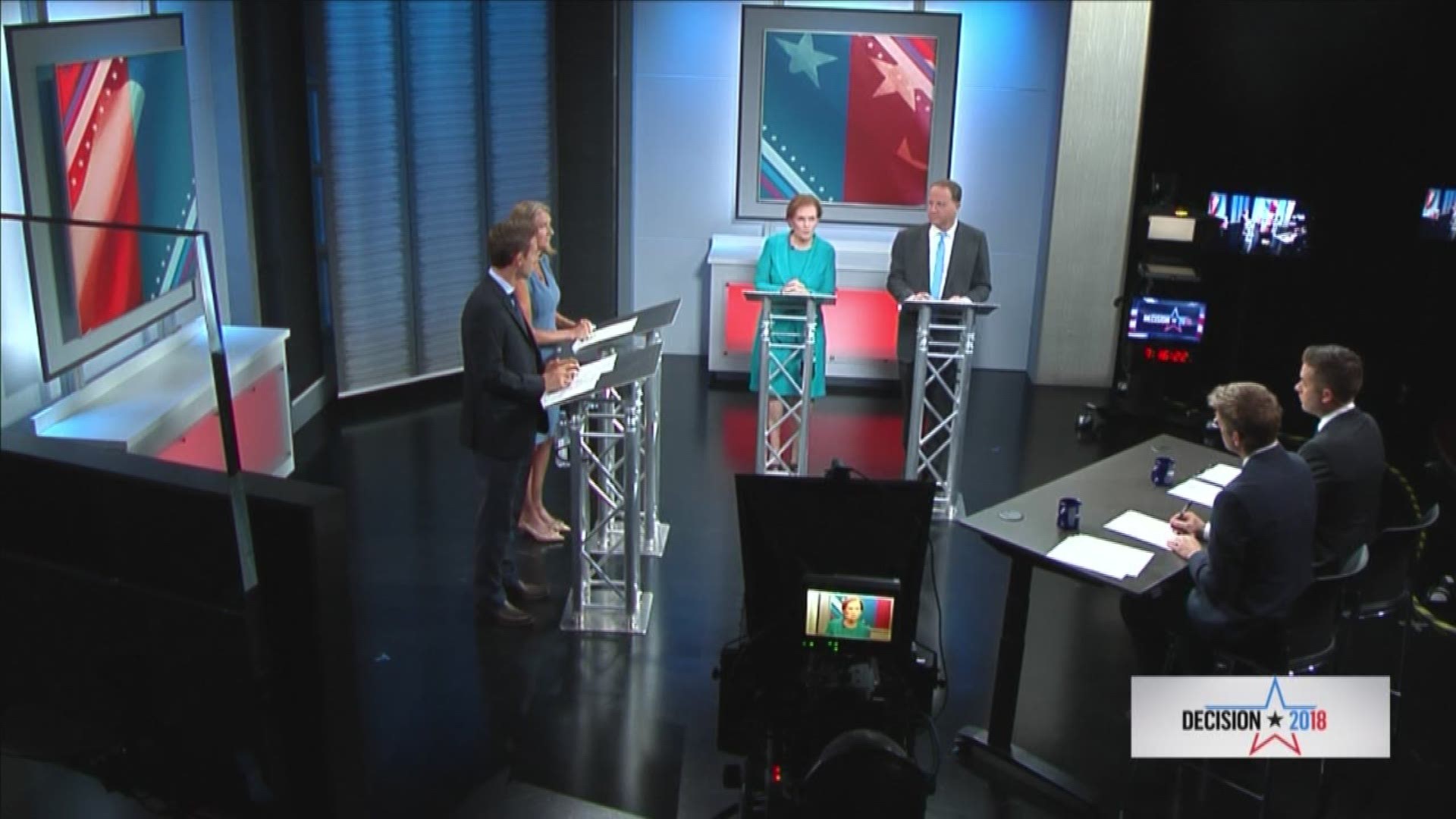 None of the four candidates were fond of private school vouchers for students in public districts.

Lynne said she thought the question of charter schools got at a deeper issue of inadequate school funding. She supported more money for schools.

Polis said that school vouchers would be decided at a local level - not by the governor. He also added that his focus is ending decades of underinvestment in schools and said he was taking on current Education Secretary Betsy DeVos who is a proponent of both charter schools and private school vouchers.

Johnston doesn't like vouchers and said he supports charter schools as long as they are held to the same standards as public schools.

Kennedy decried an education system that would pave the way for the success of some schools at the expense of others. She said she didn't think public money should be taken out of public schools. 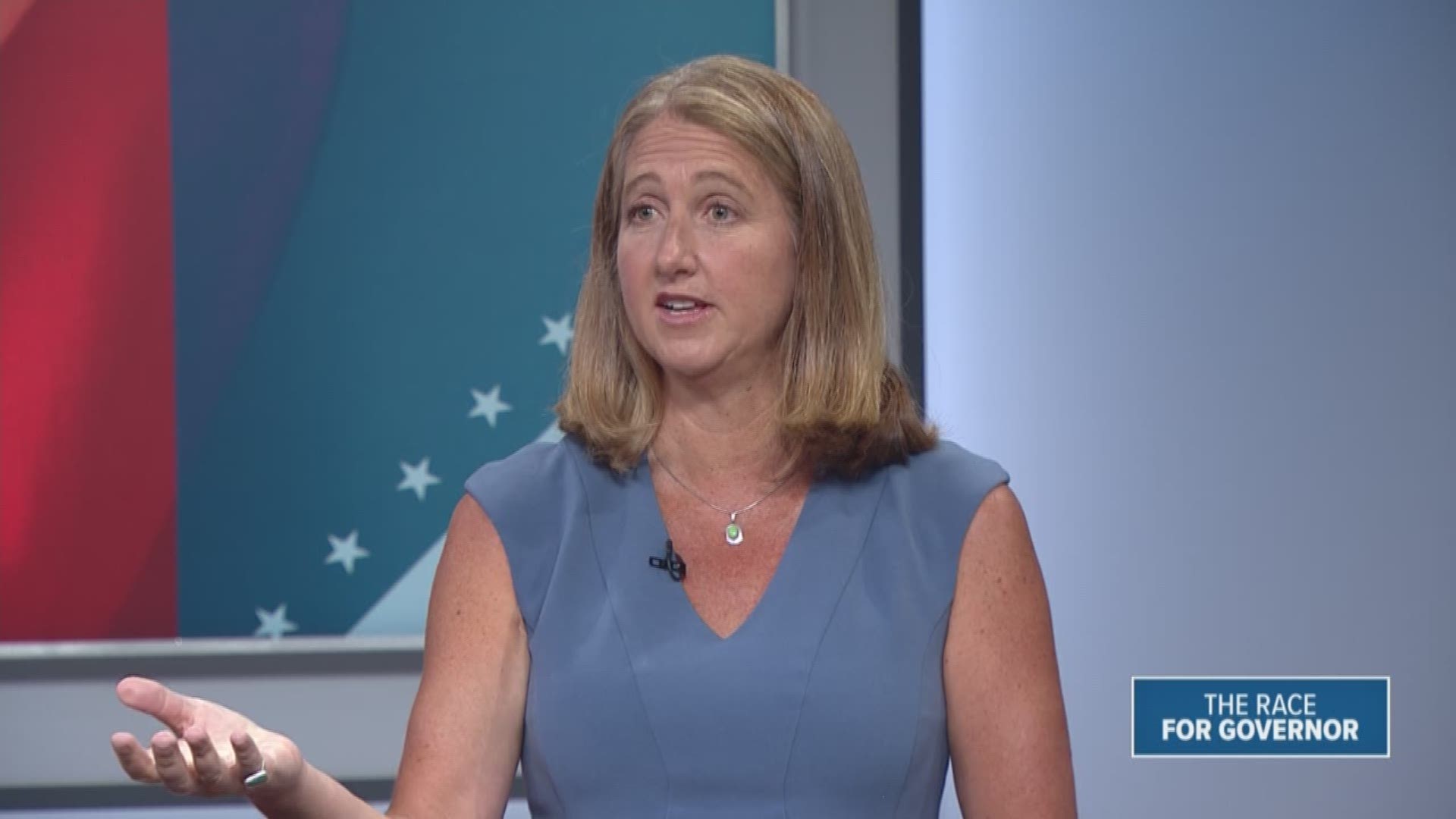 On May 29, a group called Teachers for Kennedy released an ad painting Polis and Johnston in a negative light when it came to supporting educators.

Both Johnston and Polis said she could denounce the ad if she cared about the Clean Campaign Pledge that was first put forth by Hickenlooper back in 2010.

Kennedy fended them off by saying if she told the Super PAC to take down the ad she would be violating campaign finance laws. 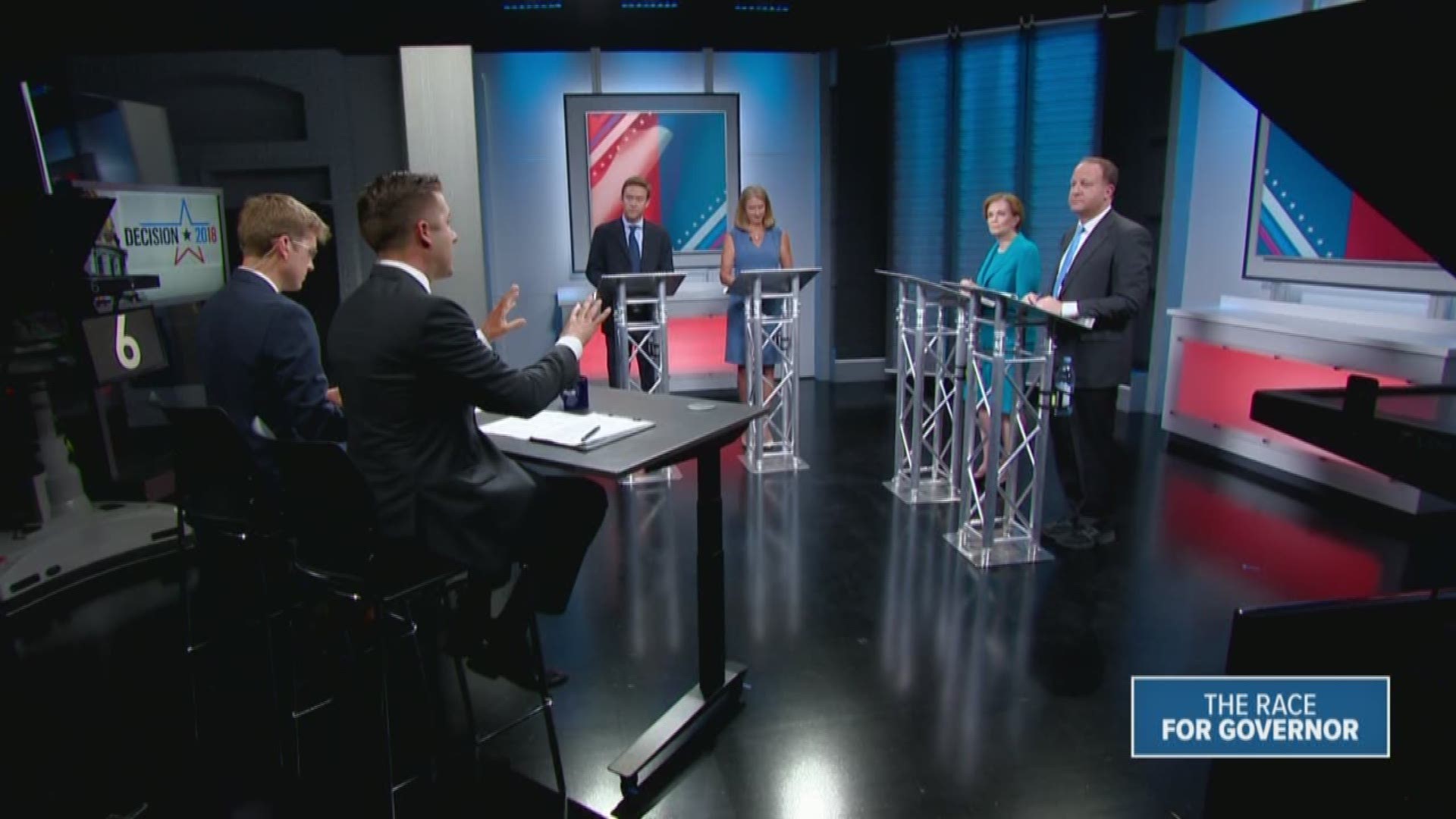 A program the Hickenlooper administration supports is trying to lure Bay Area Californians to move to the Centennial State.

Kennedy and Polis both said growth in the state hadn't been managed properly and were not for the ad campaign.

Lynne wanted to focus on educating local Coloradans to enable them to take tech sector jobs.

While Johnston supported the ad campaign to keep larger companies from leaving to find the employees they need, he said during the debate he wanted to make computer science classes available to Coloradans in high school. 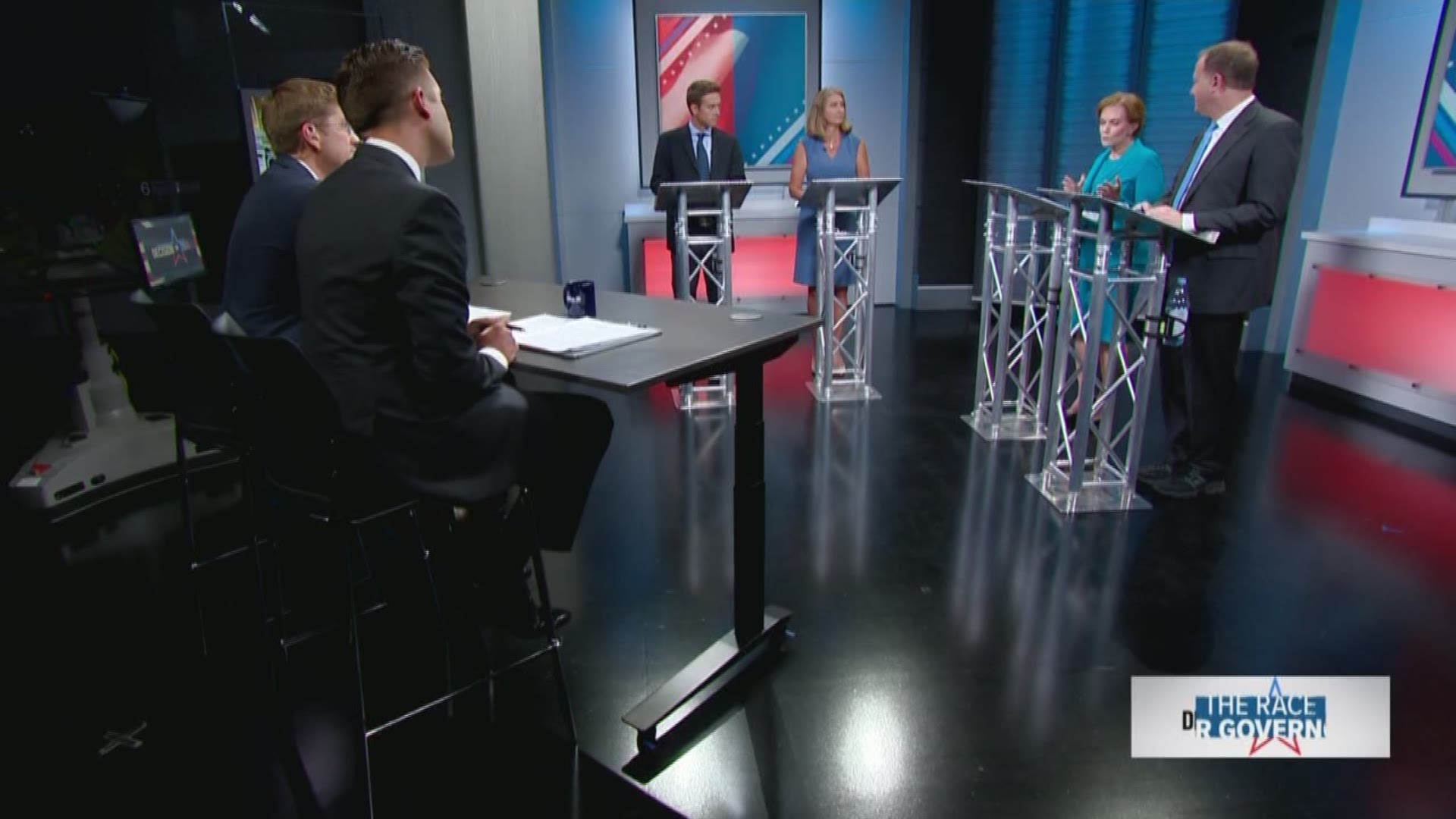 Johnston supports a change to the income tax that would not only have higher earners paying more, but paying a higher percentage. He pointed to the voters not supporting it, however.

Kennedy also supports the change to the income tax, adding that Colorado's economy is booming while education funding is lacking due to the current structure.

Lynne said that voters would support more measures to pay for the state's needs if they were put forth in a more clear and direct way.

Polis said that to get education funding up, a coalition across the aisle would have to be built and stressed that he could build such a group.

Kennedy and Johnston both supported the state's Chamber of Commerce's proposal to increase the state's sales tax to pay for infrastructure improvements.

Lynne supports a gas tax hike to pay for our roads.

Polis believes the state's general fund could be used to pay for infrastructure improvements to rail, biking and roadways.

Bring the Olympics to Colorado? 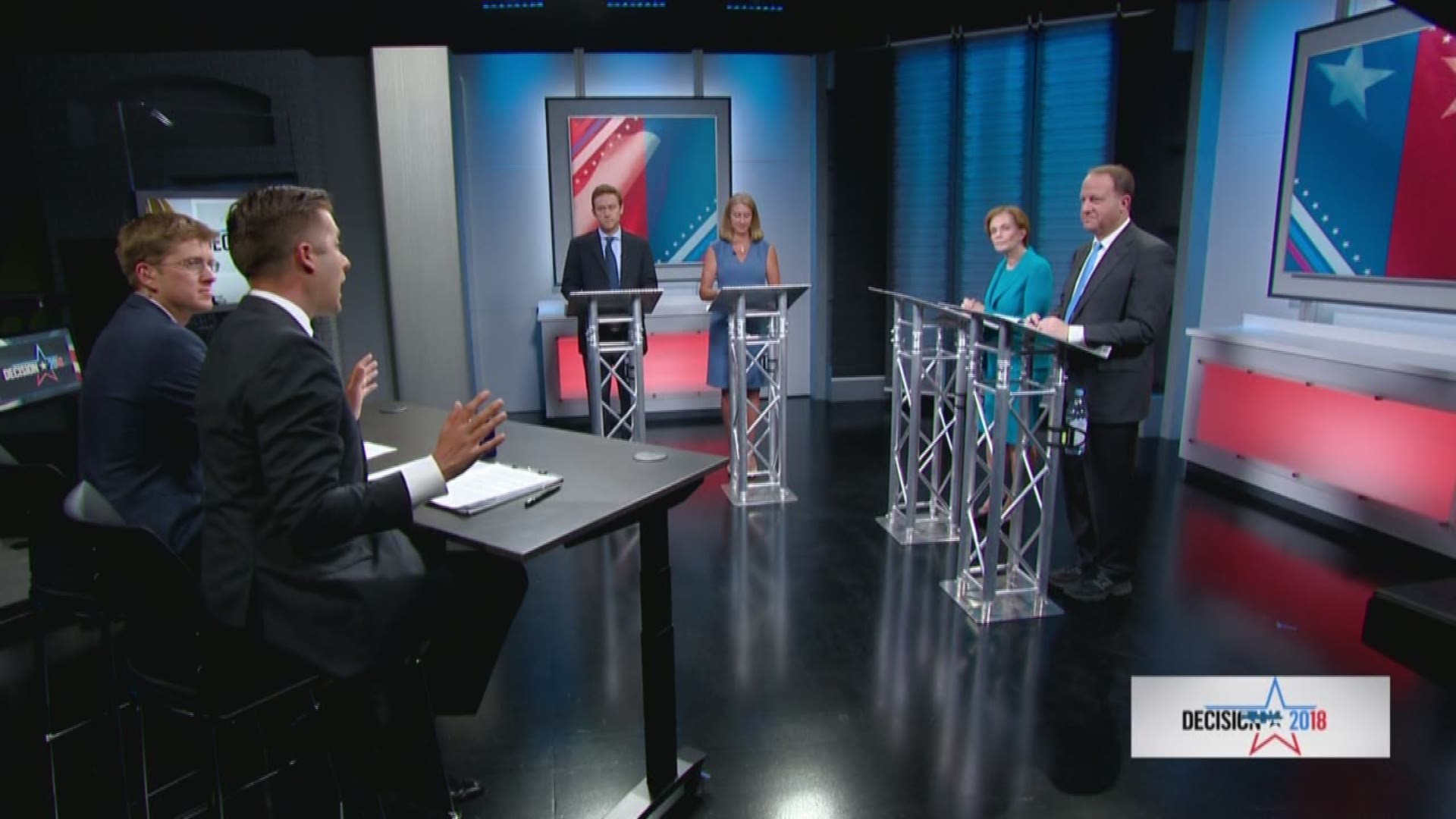 All four candidates support the Olympics with certain conditions as none were enthusiastic in their support.

Polis would only support it if zero public dollars were used to pay for it.

Lynne wanted a binding referendum, allowing the public to decide if they wanted it and whatever they voted on be the rule. She said the Olympics weren't in her top 20 priorities.

RELATED | How could Denver host the Olympics and stay on budget?

Johnston said he would only support the games if taxpayers weren't on the hook for any budget overages - which they always are.

On the subject of health care... 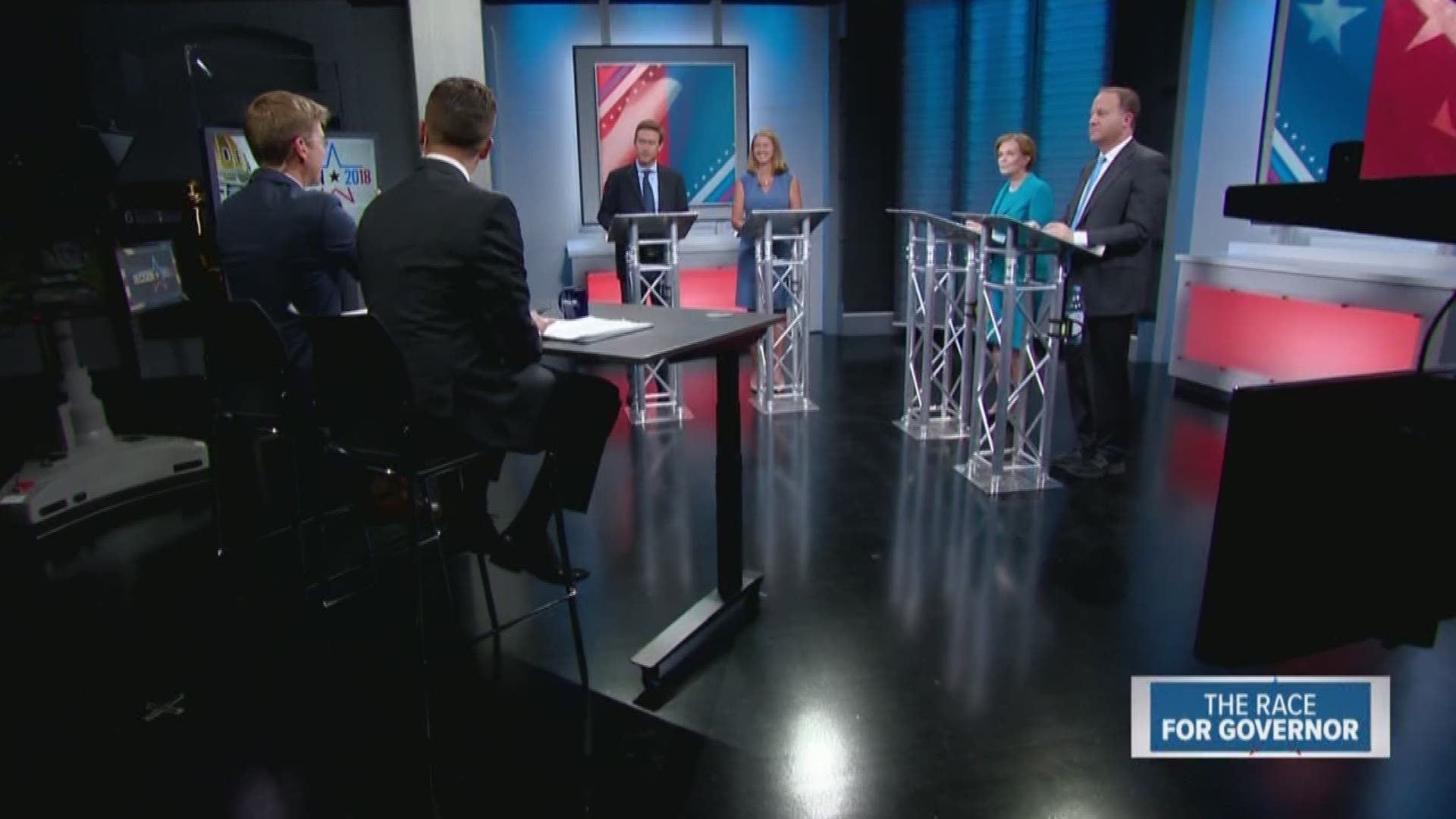 Johnston called a universal public option too disruptive to the market to support while Polis supported it precisely because it was so disruptive.

Kennedy said she was for universal public health care.

Lynne called the issue complicated and said excessive profits in the medical industry needed to be scrutinized.

As the issue is so complicated, to understand exactly what the candidates believe - watch the video segment above.

Why would each candidate beat Republican Walker Stapleton in the general? 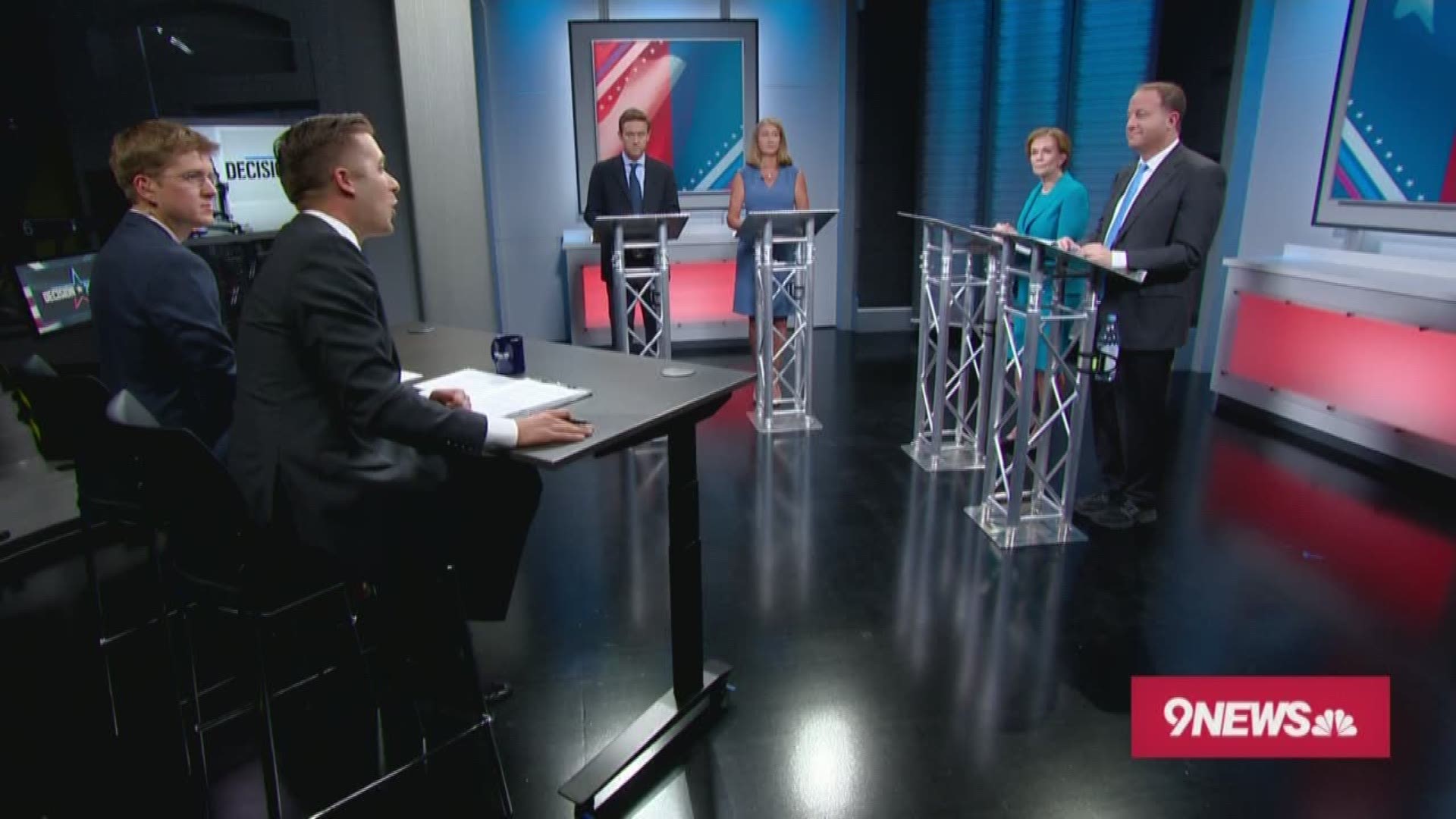 Kennedy, who lost to Stapleton for treasurer, said she was the best candidate to run against Stapleton because she wasn't running against anyone; she was running for Colorado.

Kyle Clark pointed out to Polis that Republicans hope he wins the primary because he's the easiest to beat. Polis called that reverse psychology and said he is fantastic at reaching across the aisle and building coalitions between those with disparate ideologies.

Johnston said the GOP was most scared of him winning the primary because he could win in all parts of the state. He jabbed Polis in the political ribs by saying Polis only won in his district because he outspent his opponent 50-to-1 (Polis started it by saying Johnston ran only in the "safe" district of Denver).

Polis rebuked that by saying Kennedy outspent Stapleton before and still lost.

Lynne called herself the only adult in the room and put it to voters: she has been to all 64 counties and called Stapleton highly uninformed and unengaged in running the state. 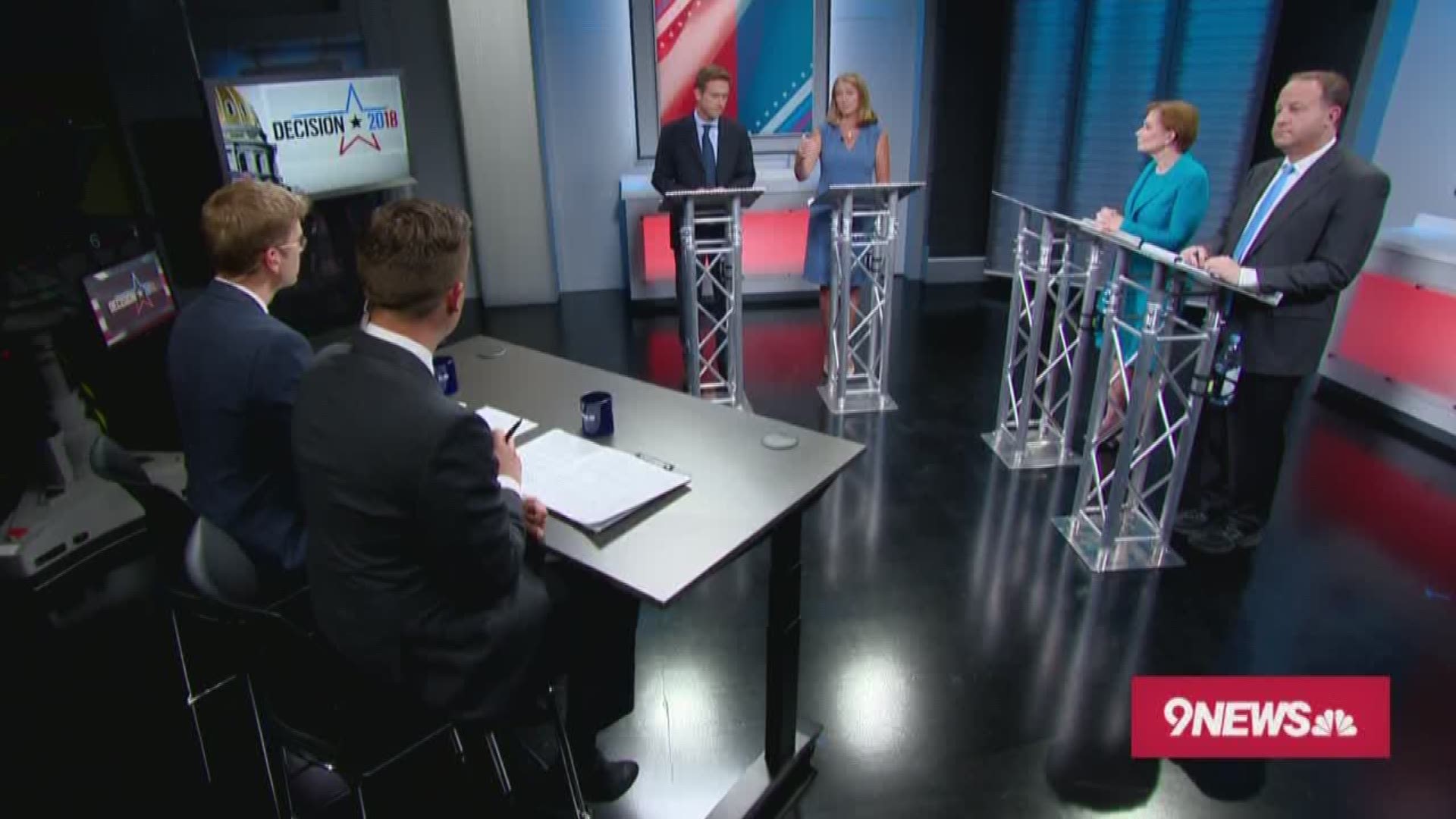 Polis said actions were more important than words and said that while he's been serving in Congress he's taken on various parts of the administration including DeVos, Interior Secretary Ryan Zinke and Trump's tax plans.

Johnston jokingly suggested a wall around Colorado to keep Trump out. He said he believes Coloradans want a governor who ignores the president's silliness but took on his bullying.

Kennedy said the states and strong governors will lead this country forward. She said the current administration was trying to pull the country back 50 years in equal protection and civil rights.

Lynne pointed to her boss - Hickenlooper - saying it's important to ignore the president on most things and focus on what the governor can control. 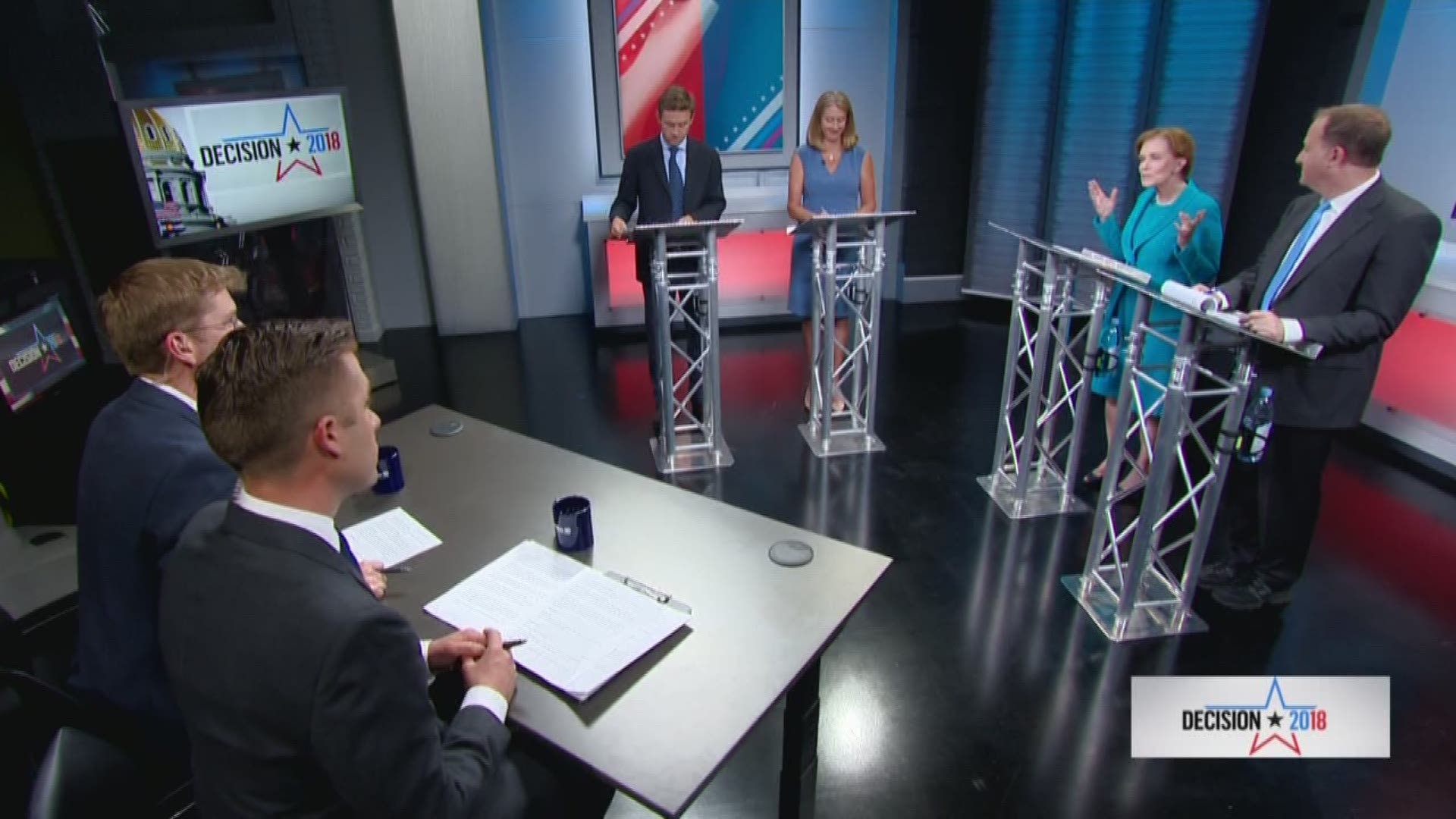 Lynne said she wished the debate had been more about policy versus bickering. She pointed to her 40 years of experience in the private and public sector as the best reason to elect her. She said the race shouldn't be about slogans or money but fixing the state's problems.

Johnston said the question is not "how did we get here?" when it comes to divisiveness but "how do we get out of here?" He said he wants to build an environment where recovery reaches all corners of the state.

Polis said the group had all the same basic values and that voters needed to look at what each has gotten done in politics. He also voiced his support for 100 percent renewable energy in Colorado by 2040.

Kennedy said she wants to make education funding her most important priority as governor. She also would work to create manageable growth for Colorado and protect the natural lands, waterways and air quality.