A tax law in the Colorado constitution is making hard to make ends meet in rural parts of the state. 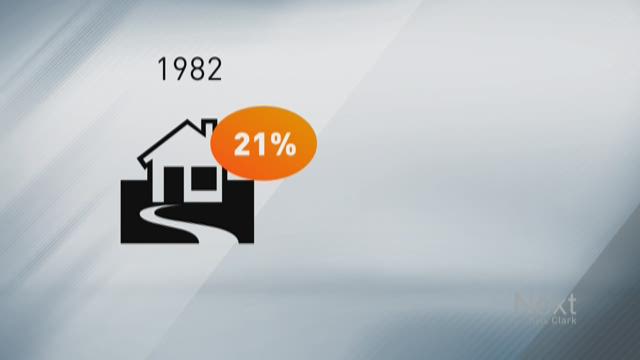 If someone burglarizes a home in rural Las Animas County, there’s a decent chance a sheriff’s deputy isn’t coming.

“The sheriff is saying he doesn’t have the resources to come out, so email him what was taken … ,” Las Animas County Commissioner Mack Louden said.

And it could get worse for rural Coloradans on the New Mexico border where county offices are already closed two days a week.

“It’s unfair what’s going on right now,” Louden said. “We just have to keep cutting services to the point of having vigilante law.”

There's no one thing to blame for this example of local governments struggling to make ends meet.

Gallagher dictates how much you pay in property taxes on your home or business. It’s named after Dennis Gallagher, a former Democratic lawmaker and Denver city auditor.

Back in the 1980s, homeowners paid way more property tax than businesses did. So, Gallagher said he helped craft a compromise.

His amendment made it so that no matter what happens to property values, homeowners pay 45 percent of the total property tax bill in the state and businesses pay 55 percent.

The first Gallagher rate taxed home owners on 21 percent of their home’s assessed value. But Monday the Colroado Department of Local Affairs dropped the homeowner rate to 7.2 percent for 2017 and 2018.

The state calculates one rate using the total value of all the homes and all the businesses in Colorado. Home prices rose faster than commercial property values, so the agency had to lower the rate paid by homeowners to keep that 45/55 split.

And therein lies the problem for rural Colorado: Home prices in Trindad aren’t rising the way they are in Denver.

“We’re not asking for a handout,” Louden said. “Just level the playing field. There’s two games going on here: One of them is the Front Range and the rest of them is rural Colorado.”

Louden likes the idea of letting counties calculate their own Gallagher rates. That would keep him from paying less in taxes than he did decades ago.

He’s open to a few other potential fixes like letting mill levies float so districts at least get the same amount of money each year.

He’s not open to repealing the amendment or freezing the rate.

One fix Gallagher wants to see is the untangling of his amendment from the Taxpayer Bill of Rights or TABOR.

TABOR is another tax amendment passed by voters in 1992. It says taxes can’t go up without a vote of the people.

That has kept governments in Colorado from using the true Gallagher percentage for the last decade.

“If Gallagher could continue to slide the way it was intended to, I think you would see a lot less of this need to come back to the community and ask for more money,” Fairmont Fire District Chief Alan Fletcher said.

His department covers 20 square miles nestled in between Golden, Arvada and Wheat Ridge.

Fletcher and his firefighters asked the community for more money two years ago when TABOR kept the residential property tax rate from rising.

And it’s looking like this latest reduction will send him back to the voters.

“It’s hard to come back and say, ‘Well, here’s what happened. TABOR and Gallagher together … ’ And people pretty much shut down,” Fletcher said. “You know, it’s like ‘You’re just fooling me. You just want a tax increase. You want to pay more money for your salaries whatever the case may be. You just did this two years ago.’”

In some ways, though, Fletcher’s lucky.

His district experienced substantial growth in the past couple of years. That means he’s getting close to what he got in years past.

“Those agencies like us who have no increase in assessed value are going to see their reduction in taxes,” Fletcher said. “And they didn’t do anything. They just didn’t have a lot of growth.”

That’s the case for the Platte Canyon Fire Protection District.

That wipes out the mill levy increase Park County voters just gave the district. And if this continues, Wesseldine is considering from two ambulances to one by 2020.

“Hopefully you’re the first person to call for the ambulance not the second person,” Wesseldine said.

He also won’t be honoring any mutual aid agreements if the property tax rate continues to drop.

“I’m not going to send my two medics out to help somebody else and leave my district uncovered … ,” Wesseldine said. “People will have cheap taxes, but with cheap taxes come less services.”

Services or the lack thereof is what Mesa County District Attorney Daniel Rubinstein plans to focus on when he asks voters for more money this fall.

“If that doesn’t go through, we may have to make some difficult choices on which cases to prosecute,” Rubinstein said.

The issue crystalized when Rubinstein ran into a problem prosecuting a 17-year-old accused of shooting and killing Deputy Derek Greer.

The budget for witness expenses ran out and he had to request supplemental money from the state. It came through, thankfully.

“And I do not want to have to be going to my voters and say that we’re going to let a violent criminal go on a softer offer because we just don’t have the manpower to prosecute properly,” Rubinstein said.

What happens next for the Gallagher amendment, however, isn’t clear.

The state legislature is supposed to pass a bill that sets the new residential rate of 7.2 percent in stone before the 2017 session ends.

There's some talk about simply not passing that bill and seeing what happens if they leave it at the current rate of 7.9 percent.

That would give local governments more to spend, but it could it could prompt lawsuits for disobeying the state's constitution.

If lawmakers want to change Gallagher, they’ll need to send a referendum to voters.

That could be a tough sell.

“I think when people find out that they’re messing with the only protection for home rate payers in the constitution, and middle class and working people are being screwed over by the politicians, they’re not going to be very happy,” Gallagher said.