Two Democratic lawmakers in the Colorado House of Representatives say they've been wearing bullet proof vests for weeks out of fear of retaliation by another member. 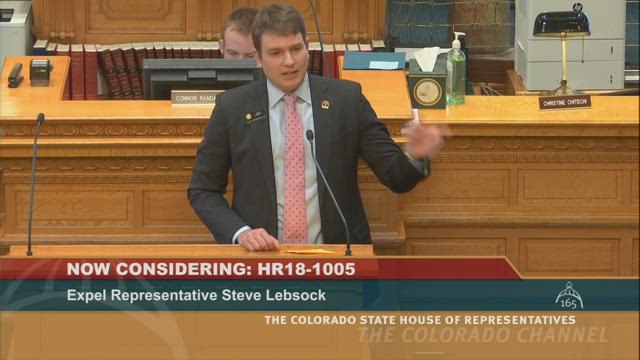 Two lawmakers say they've been walking the Colorado Capitol in fear and wearing bullet proof vests for weeks out of fear of retaliation by another member.

Reps. Alec Garnett (D-Denver) and Matt Gray (D-Broomfield) both said they are afraid of what Rep. Steve Lebsock (D-Thornton) might do to get back at them for pursuing his expulsion from the Colorado House of Representatives.

The House is currently debating a resolution on whether to remove Lebsock over sexual harassment claims.

"’I'm in the chamber of the House of Representative, and I’m wearing a bullet proof vest because I fear retaliation for telling the truth and standing up for victims of sexual harassment ," Garnett said. "I've been wearing it for three weeks."

Five women have accused Lebsock of making inappropriate comments and touching them in ways that made them uncomfortable. An outside investigator spent three months investigating those claims and determined that in all 11 situations it was “more likely than not” that the events happened as the women described them.

Garnett said he avoided talking to the media or discussing those claims on social media for weeks for fear of retaliation. Then, he talked about it on a radio show.

"And the next morning, my fears came true and I was retaliated against right here in this chamber, right back there," Garnett said. "And the person that we are talking about today said, 'I'm going to take you down.'"

That's when he decided to buy the Kevlar vest.

Gray stood next to Garnett while he spoke and then took the microphone himself.

He was out of time to speak but quickly said, "I put mine on in the parking garage so my kids don't have to see, and I don't have to explain to them what it is."

Lebsock has maintained his innocence throughout this process.

He hasn't yet spoken directly to the fear of retaliation that Garnet and Gray say compelled them buy and wear bulletproof vests, but he has said that his decision to release a 28-page document detailing the sex lives of his accusers wasn't meant to be retaliatory.

Lebsock told his colleagues he stayed quiet for weeks and released the document after his accusers went to the media with their stories.